Who should I be damage buffing as Mercy

I just started playing Overwatch (played a few games during open beta, but wasn't able to play much). I'm enjoying Mercy, but who (in a group situation) should be getting the damage buff? Additionally, when my team splits up, who should I follow to support?

Who (in a group situation) should be getting the damage buff ?

Short answer: You should be damage boosting heroes whose role is to deal damage.

Longer answer:
Most offense heroes are good choices but Pharah, Soldier: 76 and McCree might be the easiest ones to follow without getting killed.

But you can consider other heroes as well.
A damage boosted Bastion is an absolute beast for instance, and if you heal him occasionally he can focus solely on firing and reloading.
Another great combo is Mercy and D.Va although you'll have to alternate between damage boosting and healing for this to be effective. Get it right and D.Va will be able to boost to enemies, take them out quickly and recover lost mech health without retreating.

Whatever you do, never go support a player that will get you killed.
The healer is too important to the team to keep getting killed trying to save a player from a hopeless situation.

It all depends on who you have on your team, and whether or not you have your ultimate up. Generally speaking, when I don't have ultimate, I prefer to give heals instead of boosts. You charge 1% ultimate for every 12.5 health healed, which is pretty powerful, especially when healing tanks back up to full health. You do charge for damage boosts, but I find that hanging back and providing sustain power is very good for ultimate charge and for keeping the team up. Obviously, though, if everybody is healed up, damage boosts will provide more ultimate charge than simply keeping the heal beam up.

If you do have your ultimate, then you can be more aggressive with damage boosts. Resurrect brings teammates back up at full health, which can be extremely powerful even for a single revive. You obviously want to damage boost someone who can put out consistent damage, though. Use your best judgment on who you think can put out the damage, and don't stray too far from your team.

In general, I like to damage boost characters that can put out damage at a distance. Pharah, Junkrat, Soldier: 76, and McCree are all good candidates for this. Pharah is especially fun to damage boost, since damage boost brings her rockets to 150 damage from 120, and you can also keep using your shift and space to stay in the air with her. However, do keep in mind you become a prime Widowmaker target doing this.

It's really up to your judgment though. Obviously Reinhardt is probably not your best choice, however, aside from him, there aren't very many bad options. After all, 25% extra damage is 25% extra damage for everyone, so don't let some list limit your creativity of plays.

In the case that your team is splitting up, tanks are usually a good bet to stick with. That said, again, there isn't really a wrong choice as long as you avoid getting caught out alone at all costs.

For most Mercy players in most situations, the only characters you should not damage buff are: Genji, Lucio, Mei, Reinhardt, Symmetra, and Winston. 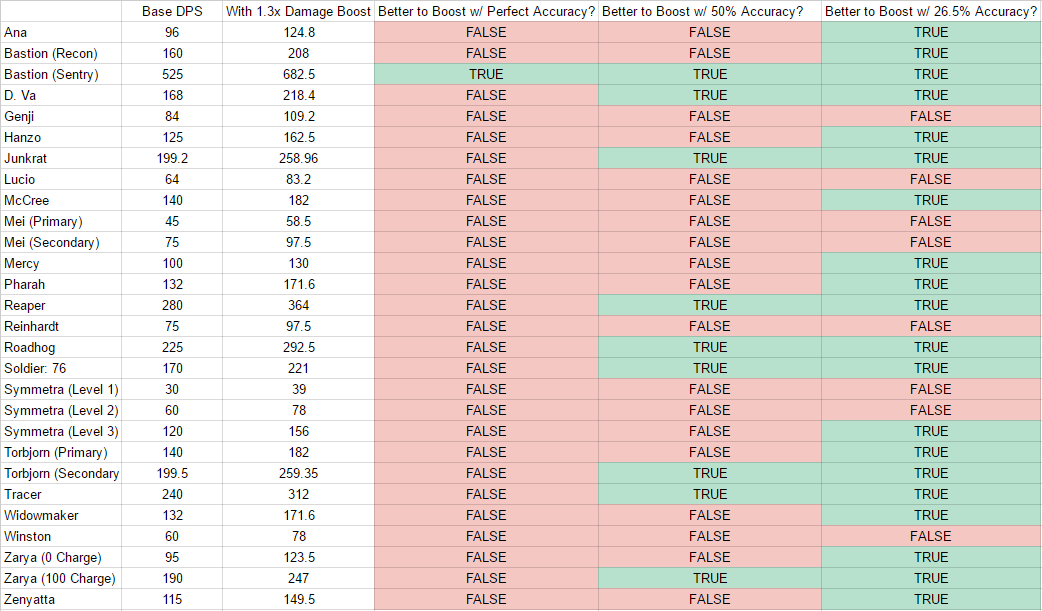 Mercy's pistol deals 100 damage per second, while her damage boost increases the damage of the target by 30%. This means that if we want to know whether it is better to damage boost a hero, the boosted damage will need to be higher than the potential combined damage of that hero's primary fire plus Mercy's pistol. Assuming both players are perfectly accurate, only Bastion in Sentry form benefits more from Mercy's damage beam than he would from Mercy's pistol.

However, Mercy's pistol is tricky to aim, and perfect accuracy is a pretty big assumption. According to MasterOverwatch, I have 41% accuracy with Mercy, putting me in the 89th percentile. If we assume that the top Mercy players have around 50% accuracy, then Sentry Form Bastion, D. Va, Junkrat, Reaper, Roadhog, Soldier: 76, Torbjorn, Tracer, and a fully charged Zarya all become viable damage boost targets.

Given that most players are not in the top percentile though, we'll need to refine the list further. MasterOverwatch lists the average accuracy for Mercy as 26.5% for quickplay and 29% for competitive. Overbuff claims the average quickplay Mercy has 27% accuracy, and 28% in competitive. Because quickplay represents a larger group of players than competitive, I'll use the 26.5% statistic for the purposes of this answer.

For these average players, more damage will be dealt if they damage boost most of the heroes than if they try to shoot the target. Only Genji, Lucio, Mei, Renhardt, Symmetra at first and second levels of charge, and Winston do not deal enough damage to benefit more from a boost than Mercy's pistol.

Please note that I am ignoring a lot of nuance in this answer, such as reload times, headshot modifiers, and positioning. For example, while Tracer does benefit from Mercy's damage boost even if the Mercy player is highly accurate, if the Mercy positions herself to be able to boost Tracer she is likely away from her team and quite vulnerable. It's better to try and shoot a Reaper that is sneaking up behind your team than to damage boost the Zarya that is not paying any attention, and you should probably be healing Roadhog, not damage boosting him or trying to help him with your pistol.

I would focus on helping heroes that are able to spam a lot, for example, Pharah.

Basically, they don't need to aim for a headshot to kill the enemies, so they can shoot a lot in a short period of time, damaging, in some cases, more than one enemy at a time.

You could also buff heroes playing on the back side, as they will live longer (in most cases) and they usually have pretty good damage by default so your buff could mean some more kills than usually.

I like Mercy, and I play her a lot. It's been said above, but I thought I would elaborate. I use damage boosting a lot. A lot of the time I'm sitting behind a Bastion or D'Va who's already at full health, and I can quickly switch to healing them in the event they're taking damage. I'll also be listening for Soldier: 76 or Reaper to use their ultimate to provide them a damage boost.

In addition, I tend to prioritize other heroes over Widowmaker and Hanzo unless the enemy team has a lot of tanks. These heroes tend to stray from the pack, and have the ability to one-shot other heroes.

If the team splits up, I'll try to follow the Pharah. She has a really good escape mechanism that can keep you away from the close range attackers, and I've found boosting her damage provides a good impact on her KD ratio. Also, her ability to stay in the air gives her fewer obstructions when engaging enemies who don't hide in buildings.

I'd like to address one thing I don't see here: if an enemy is trying to take you down, and someone on your team is trying to kill them to keep you alive, boost that player while you're dancing around cover and using Guardian Angel to shift position and keep the fight around that ally. It might seem a little obvious, but keeping yourself alive is hugely important to fulfilling your role, while other players can be productive in death.

I'm not MOBA fan so I don't know about how this works in a MOBA, but overwatch here isn't exactly a MOBA either. For me it's quite logical to either damage-boost any attacking hero on your team, and/or the hero doing the most damage/kills. Although I play Hanzo (a defense class) I tend to get gold on eliminations/dmg done, so it makes sense to boost me as I'm doing the most harm to the enemy team.

On your second question, if your team is playing as a proper team - everyone stays behind the tank, then heal the tank, if not then again go with the highest value player as they are doing the msot dmg/kills and need the health to carry on doing so.

2
What heroes should Mercy damage boost versus shooting herself?

2
Can a Winston buffed by Mercy outdamage a Mercy heal?
12
Does player level affect matchmaking?
17
How does Torbjörn's turret choose its target?
18
What other means disable Reinhardt's shield except hack and cool down?
3
What is the difference in SR gained when playing solo vs a group?
5
How should I prioritize my teammates when healing as Mercy?
7
Do smurfs "skew" or introduce bias in a competitive ladder? Why do players derank as a team?