What determines if a character is pinned or 'bounces off' Reinhardt's charge?

I like playing Reinhardt. Charging people is fun, and on basically anyone with less than 400 health it's an instant kill (Assuming you pin them and slam them into a wall).

Sometimes, I seem to collide with enemy players but instead of pinning them... they just 'bounce off' me (I don't really know how else to describe it... they just get knocked far away). This sucks for me, or the Reinhardt... but is pretty great for the player who bounces away since they're no longer closer to an angry Reinhardt. What exactly causes this behavior?

Simply, if you charge directly into an enemy, they won't take any damage and be pinned for the rest of the charge; if you only just graze them, they'll take 50 damage and be knocked back, just like what would happen if you charged into them after pinning another enemy. All of this seems to completely ignore relative height, i.e. there's no vertical graze boundary, and you'll always pin an enemy even if you're just touching their foor or their head, but this scenario is harder to find in regular gameplay.

Imagine, if you will, a spherical Reinhardt, and visualize how enemies' bodies would react to a 200+kg metal ball flying at them. If the enemy were to only touch one side of the sphere, they'd take damage from the hit, of course, but they'd be pushed aside instead of dragged forward. Now if the Reinball were to hit an enemy directly head on, so their body was directly in the way of the center of mass of the sphere, they'd be moved in the same direction as Reinhardt is, dragging them along for the charge. I know it's somewhat of an abstraction, but it works very well to get an idea of how pinning works. I've made a diagram to explain what I mean: 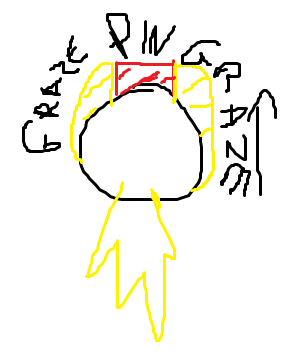 Of course, this is all based on my experience, but it seems like an accurate model.

The first player you hit is pinned, all subsequent players are knocked back.

Heyho, 38 hours Reinhard playtime talking here (excluding beta time). While The partial asnwer of DanmakuGrazer is correct from its content (Describing out of empiric observatiosn aswell), there are additional conditions having influence on this. For example Zarya's shield is reducing the pinning angle. (Untill some days ago, I'd have said her shield makes her unpinable by charging, but then one time I amde it by picking the target completly frontal made me pin her even with shield up.)

Same is true for an transcending Zenyata. Also I had sometimes the feeling (but can't confirm this yet) its harder to pick characters hiding behind a reinhard shield. It everytime felt to me like there it is also mroe likely for them to be bouncing of. So summarized this means, the usual ability blocking kidns of shield affect the zone of getting pinned or just pushed.