What is diplomatic "threat", and how do I change it

In the diplomacy screen of Stellaris, an opinion score is shown, that shows how much the other empire likes you. One component of this score is "Threat". Some of my neighbours have huge negative threat values, some don't. Yet I never had a war with any of them.

What influences this value, and how can I change it? 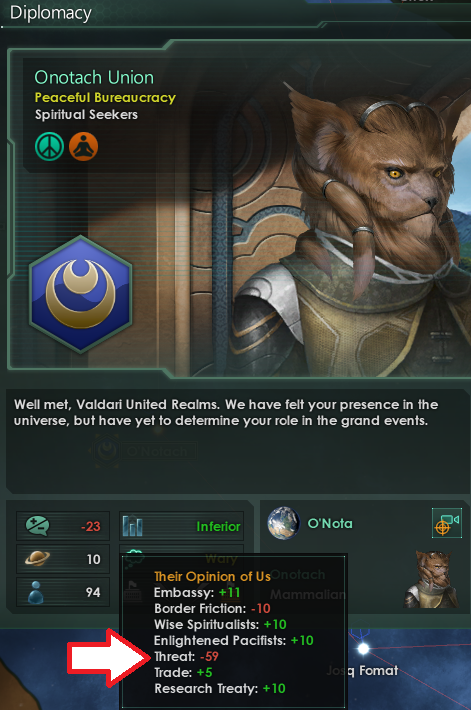 That's a measure of how much they perceive you as a threat. Threat is generated by taking vassals or conquering planets from any empire.

The closer you and the conquerered are to an empire the more threat it generates. Threat is slowly reduced over time and there is no other way to eliminate it.

You can work around threat by liberating enemy planets and peacefully vassalizing them or simply not conquering.

Think of threat as a warmonger reputation and that an empire believes you will eventually come to conquer them as you did before with others.

7
How to expand the borders, beside Outposts and Colony-ships in Stellaris
7
What does the ethics divergence value actually mean?
9
How to do a full diplomatic integration of a vassal?
9
How exactly does ethics divergence work?
6
How does government ethos change work in Stellaris?
2
How to integrate a pre-FTL and a pre-sapient civilization in the same system into your Stellaris empire?
2
Why and how often do AI Empires change their names?
1
How can I keep my pops happy and avoid constant unrest
0
How to get over this one little last bit of acceptance lack to actually use diplomacy for anything?
0
How to breed specialist pops instead of worker pops and how to manage overpopulation on my capital?