Why is my rocket drifting north?

So I just built this unmanned rocket: 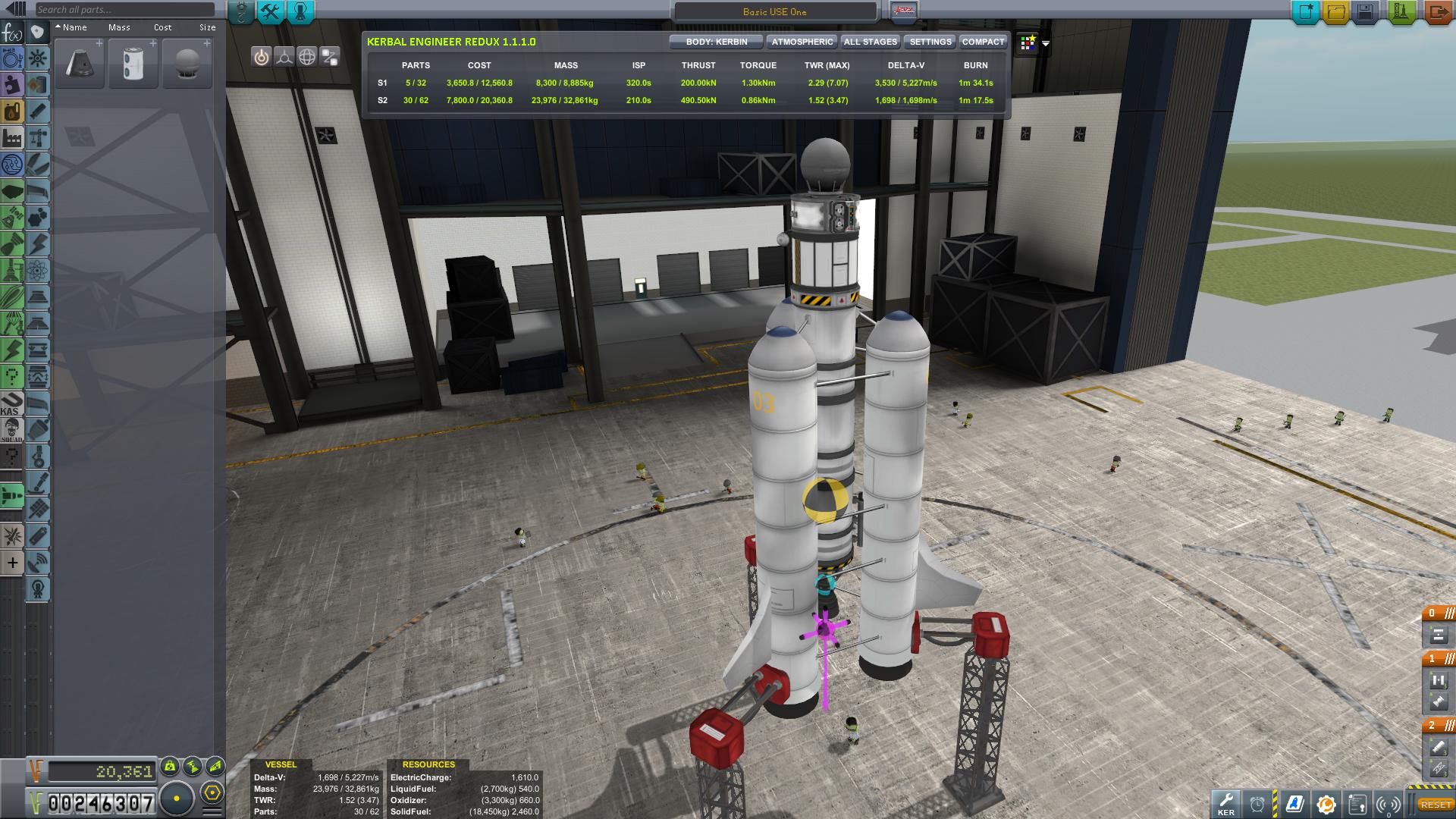 Although the center of mass is in the center of the rocket it is "drifting" north when I launch it.
Since I play in career mode and I'm still very early in the game I only have access to the basic Sputnik Command Pod which does not support SAS. I tried using the WASD keys to hold against it but the rocket doesn't react to it.

Your rocket is uncontrollable due to lack of aerodynamic control surfaces, no gimbaling in first stage, triple symmetry, excessive (non-throttlable) thrust and horrible aerodynamics of payload.

TLDR: Put that Goo and KER inside of service bay! Putting unbalanced Goo on side of rocket is a neat trick for gravity turn without any control input. And look! Your Goo is roughly on north of rocket ;)

I'll keep this answer rather short, because I wrote quite a bit about rocket designs already: Low tech rockets and Very big rockets.

(I will presume equatorial prograde launch)

Symmetry of side boosters:

Booster stage: You went with trio of SRB's, and it look its not aligned well against airflow. It also is made out of uncontrollable parts. Once it goes out of control it will only gets worse. High, and quickly rising, thrust of boosters won't let rocket stabilize on its own with aero forces. With force of 7g it might even rip apart or crush upper stages (You know rocket is too strong when it burns on ascent). Off to drawing board with that stage.

Tip: You can tweak thrust of SRB's in their context menu to lower values.

Hint: Winglets on top give you high control authority but it can be oversensitive, winglets on bottom give you stability and moderate control.

Note: Winglets on stage with gimbal capability are usually unnecessary. If you need them to fly straight, you might have design problem. For stack of SRB's winglets however are advised.

Payload: Its aerodynamic hell. Put that Goo and KER module in that service bay. Coupled with uncontrollable first stage it will make rocket fail. Also I do not see antenna nor parachutes. You won't be able to transmit science back to base nor land to recover it.

Hint: Use part-offset gizmo (gizmos are those four buttons in top left corner of preview window) and put parts into nose cones. Its not cheating. Its engineering. Be a man and build your own parts ;)

Note: Stayputnik have no reaction wheel capability. Without it you can only turn it with engine power. Pack small reaction wheel and some (a lot) batteries (Swivel can recharge them).

Tricks to save that rocket:

6
How to control the Rocket Powered VTOL?
13
How can I calculate the right number/types of parachutes for my craft?
3
Same rocket, different payload?
5
How do I make sure radially-mounted stages don't collide with the craft when they're decoupled?
3
Why can't I move my unmanned rocket?
3
Why won't my MK16 parachute deploy?
7
Why did Jebediah survive after jumping out of a plumeting rocket?
6
How to design heavy lifter rocket
6
How to control a rocket?
4
Can't straighten rocket components