Is there in-game differences between 3 and 5 screws NES games?

I noticed this weekend that there are two different "screw-versions" of the old NES games. As we can read on Nintendo Age, most of games have both version with 5 and 3 screws.

Here is a great example : 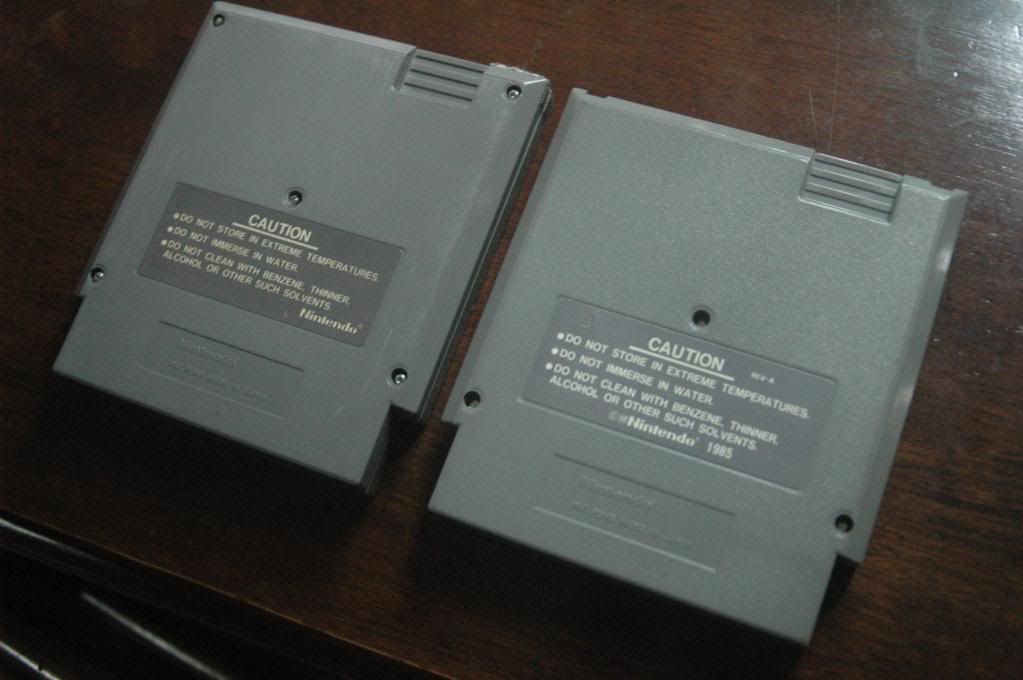 Do the games are 100% identical in-game? For some titles, there is a huge price difference between the 3 screws version and the 5 screws one and I want to be sure. Is the only factor the rarity of each version? Or there are in-game differences between those versions ? What is the reason there are 3 and 5 screws NES games?

It probably happened to save money on the top screws. Looking around a bit, I've found the following text regarding the cartridge variations:

Cartridges were originally released with five screws, one in each corner and one in the center. Later, the molds were changed so the back of the case held two male clips which hooked snuggly into the front’s “slot-B” holes. This eliminated the need for the upper corner screws and was, again, probably introduced as a cost-saving alternative.

I don't think you'll be able to find any better explanation, because in the end it's really just that: Another "hardware revision". The price difference is most likely related to the age and rarity, considering the variation with 5 screws is older and got abandoned.

As for the actual cartridge contents, it's impossible to say: This really depends on the actual game and despite popular believe, even classic console games were often released in one or two revisions, sometimes with bugs fixed or minor things (like some graphics) getting changed.

The problem is there's no way of being sure when the program was actually updated, before, during, or after the change in case/screw design. But yes, some are different.

For instance, I have a 5 screw Zelda and it lacks the "press reset" warnings present in most battery backed up games. I've seen other Zelda carts that do have the warnings (in game, I mean, not just printed on the cart labels). When did the change happen? Beats me, but most 3 screws seem to have it, and 5 screws not.

Although not related to 3-screw vs. 5-screw games, there is a way to see if there is a different rom on a game between two copies. According to this answer, all you have to do is check the revision number that is stamped on the caution label on the back of the cart. Each cart is stamped with 2 digits that represent an assembly line where the cart was assembled. IF nothing follows the numbers, then this is the first version of the game rom. If there is an "A", then it is the second version of the rom released to production, if there is a "B", it's the third, and so on.

Regarding 5 screws, yes this was a cost savings modification. By eliminating 2 screws, Nintendo eliminated the future-need to buy literally millions of screws. Also, this would have saved time on assembly and would have allowed for more cartridges to be assembled per day. This would have meant fewer facilities and assembly lines would be needed to crank out just as many carts.

In a lot of cases I've found so far, there are actual ROM differences between the 5-Screw and the 3-Screw cartridges. In some cases, there are even differences between some 5-Screw and other 5-Screw cartridges (e.g. Popeye - NES-PP-0 vs. NES-PP-1), and between some 3-Screw and 3-Screw cartridges (e.g. Dragon Warrior - NES-DQ-0 and NES-DQ-1), so yes, SOMETHING changed between them, even if's as minor as the difference between "Thy hits have been reduced by" (for the "Trademark To Nintendo" start screen message) and "Thy hit points have been reduced by" (on the Trademark Of Nintendo" start screen message) on the Dragon Warrior ROMs.

Not the answer you're looking for? Browse other questions tagged nes .

4
How can I tell which rom version of a game is loaded on an NES cartridge?

1
NES has trouble reading games due to minor damage
1
Are all 3DS NES Virtual Console game multi-player capable?
9
I cannot get ANY game to work on an old NES: potential Lock Out Chip Issue?
10
Illustrated list of differences between the arcade and NES versions of Super Mario Bros
31
Why do some versions of Legend of Zelda on the NES have the "hold reset" caution screen, and some don't?
4
How can I tell which rom version of a game is loaded on an NES cartridge?
2
How do I tell Legend of Zelda NES versions apart?
33
How to find a specific NES pirate, unlicensed or bootleg game information?
2
Was Super Mario Bros. 2 for the FDS a two-sided disk?
28
Why do older generations games have a common look and feel by console?