What are the different tiers of gear mods?

I've noticed that the Gear Mods with stat boosts all have varying levels of stat bonus.

The main chunk of them I have I bought from the Base of Operations Phoenix credits vendor (I forget the official title of this npc) as blueprints and crafted. These all seem to be lv30 items with bonuses around 120.

I also have one 'Prototype Electronics Mod' which has a bonus closer to 130.

Are there different tiers of gear mods, or do they just follow standard item levels in that higher level gear mods are named differently?

Is there a tier above and below these, and if so how are they named?

The highest gear mod level I've seen is level 30 and power level 32 (in the same item). Higher the power level, higher the stats/bonuses.
The power level doesn't change the itens name, the name describes what kind of mod it is, actually there are three types:

On this reddit page there is an image that shows all the available gear mods!

Click on the image below to view the higher-resolution, original image. 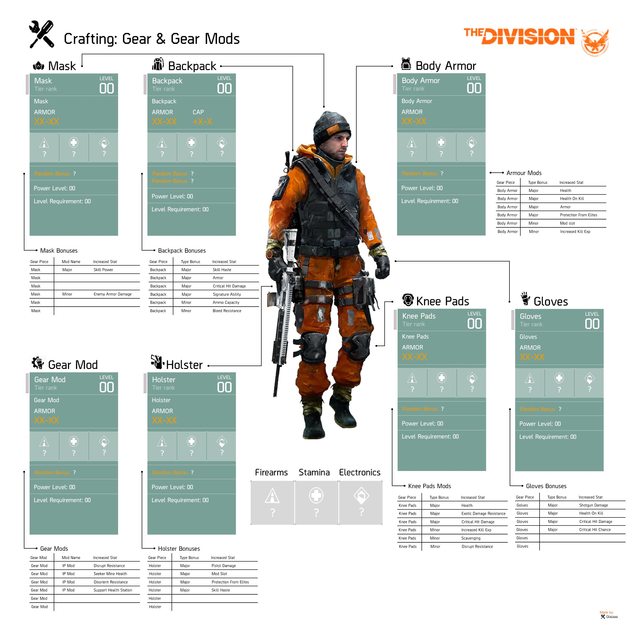 Not the answer you're looking for? Browse other questions tagged the-division .

12
What are the penalties for dying in The Division?
3
What DZ rank does 20+ DZ gear require?
3
What do the different types of stability do?
4
What are the differences between all the high end gears/blueprints vendors
9
What are the yellow bars on map locations in The Division?
5
Am I guaranteed to have the original stat as an option when recalibrating my gear?
4
What determines DZ gear score bracket?
2
Are some blueprints' "random bonus" limited to a subset?
4
What color is the best gear?