Is there any way to move a brahmin away from a feed trough?

When you place a brahmin feed trough in a settlement, after a while a brahmin will start feeding from it. However, as the brahmin is eating from it, the trough becomes unmovable. This obviously becomes an issue if I decide that I want to renovate my settlement.

Is there any way to stop the brahmin feeding from it, or just move it away temporarily? I don't think that it's possible to direct a brahmin to move to different places like you can with settlers in construction mode.

If I ever attack a brahmin in my settlement, all of the settlers turn on me, so killing it appears not to be an option.

Do I need to lure something to attack my settlement in order to make it flee? Or do I need to use a tamed creature that I have caught in a cage, and then turn of the Beta Wave Emitter to make it kill the brahmin?

I'm on a console, so console commands aren't available.

Playing around with the "feeding Brahmin" myself, I found the simplest way to move the Brahmin away from the feed trough was to simply wait. Failing that, using an extra feed trough can coerce Brahmin to another spot. Alternatively, you can try to kill the Brahmin in stealth. If you are having this problem with the PC version, using the console is always an option.

This is the first thing you should do. Brahmin only attach to the feed trough while they are eating, and they should only eat for less than a minute. During my testing process, the Brahmin moved from their feeding trough many times.

Placing an extra feed trough will not immediately call the Brahmin over to the new spot. However, the Brahmin will periodically move back and fourth between available feed troughs.

In fact, technically you do not need to physically place the extra feed trough. In my research, not only will a Brahmin eat from a feed trough that is only being previewed, they will actually favor them.

As you can see in the picture, below, the Brahmin appears to prefer eating from the trough that is currently being previewed, even though the trough can not actually be placed at its current position. 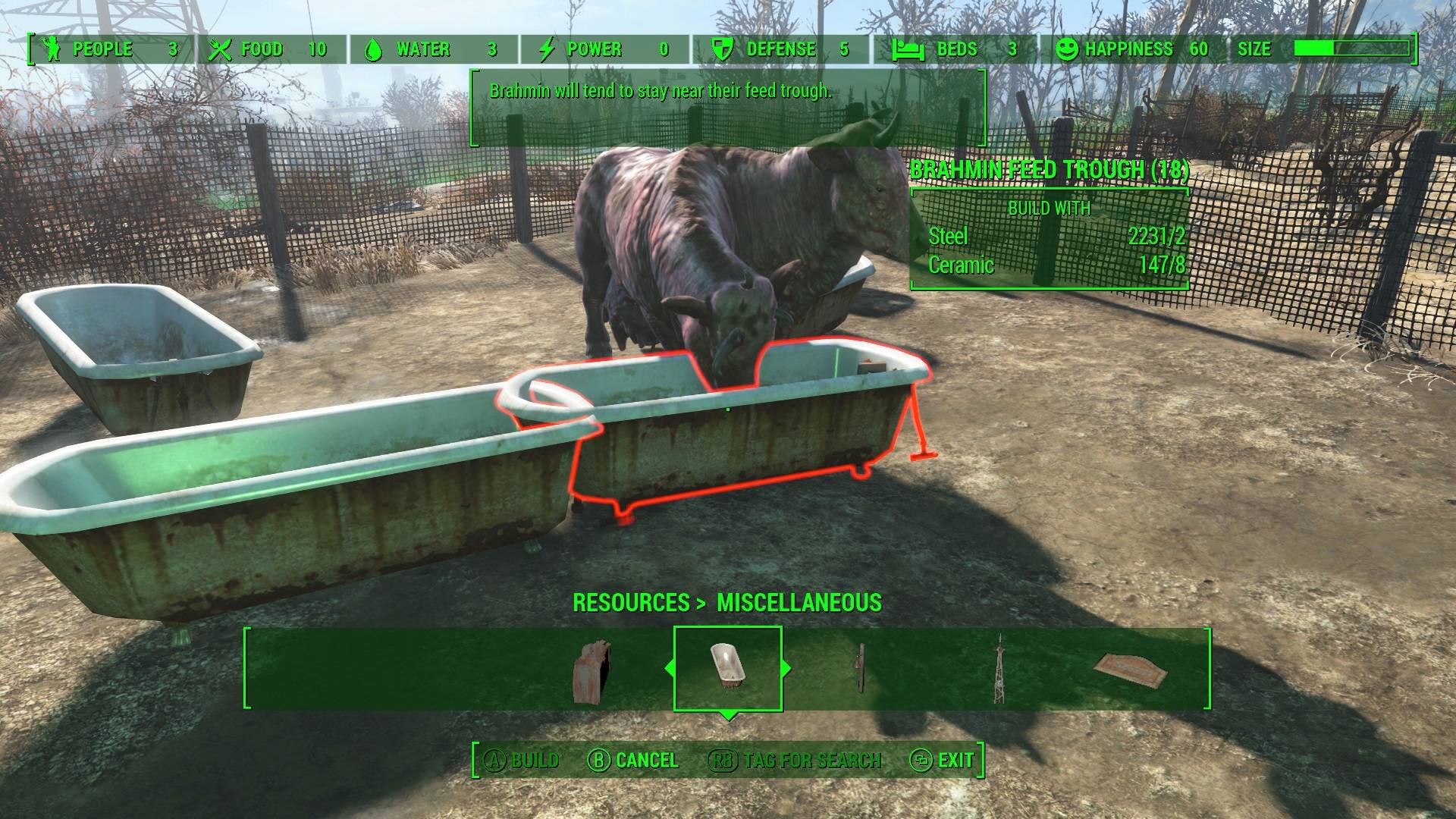 Kill the Brahmin in stealth

As reported, you have the option to simply kill the Brahmin, but that would turn your village against you. Ultimately, what they don't know can't hurt them. Your villagers will not turn hostile if they do not become aware of you attacking the Brahmin.

To kill the Brahmin in stealth, it is better to wait until the twilight hours. Sleep or wait until around 4 a.m., so as to minimalise the amount of villagers roaming around. Find a spot behind some buildings, where you can not be seen, but have clear line to the Brahmin. Enter stealth mode, and ensure that you are actually hidden. While you are hidden, take pot shots at the Brahmin. It might help to move completely into cover, after each shot, to avoid being detected by the Brahmin.

This particular solution may be slow, in comparison to the alternatives. You can not simply "open fire" on the Brahmin, as sustained fire will eventually force you to be detected. But it does work. You will definitely want to save before any attempt, in case you are detected. It might also help to have a companion nearby; Your companion should not interfere while you remain stealth, but will start attacking if you are detected. This makes it easier to ensure that you are still hidden, and will not walk out to a gang of angry villagers.

The console is only available if you are playing on PC, but it can be a lifesaver, if all else fails. We will assume you have no problem killing the Brahmin, at this point, as doing so through the console should not turn your villagers aggressive.