Is there a clear water MineCraft mod that will work for SMP servers?

I would like to know if it's possible to use some kind of minecraft mod to make the water that I look through clear. I understand that there's mods to do it and I can also modify my texture pack, but I've not found any clear details and more importantly, I haven't learned whether I'll be able to use that kind of a mod when I play on my SMP server.

Can somebody point me in the right direction to answer these questions?

To be clear, I don't want to just edit the texture pack, I would also like to change the clarity (and color?) of the water itself so I can see further and so the light doesn't decrease as fast.

I'm going to be making a water world (110 block sea level and canyons down to 20 blocks) using the PhoenixTerrainMod so it's rather important that I'm able to see long distances and that the water isn't totally dark because it sucks up all the light. From what I understand I'll need a client mod to modify the alpha values of the water, so where might I be able to get that?

OptiFine has, among many other improvements, a clear water option (under Video Options -> Details). This is a pure client modification and works just as fine in SMP. (Note that this is not compatible with MCPatcher, which is however not needed since OptiFine also includes HD texture support).

As far as I know, texture packs work entirely locally (note that this might change). This means that you'll be able to use it on a SMP server without any problems. The only thing that you have to do is find (or make) a texture pack that does this for you and install it.

Try the CrystalClearWaters mod: I'm not sure if it's SMP-friendly, but if you install it locally it should only affect the rendering on your own client.

If you want to increase your visibility underwater legitimately, recently (in MineCraft 1.6), the Respiration enchantment on helmets also increases the ability to see underwater.

Respiration can go up to 3 levels, and the stronger the enchantment, the better your underwater vision. 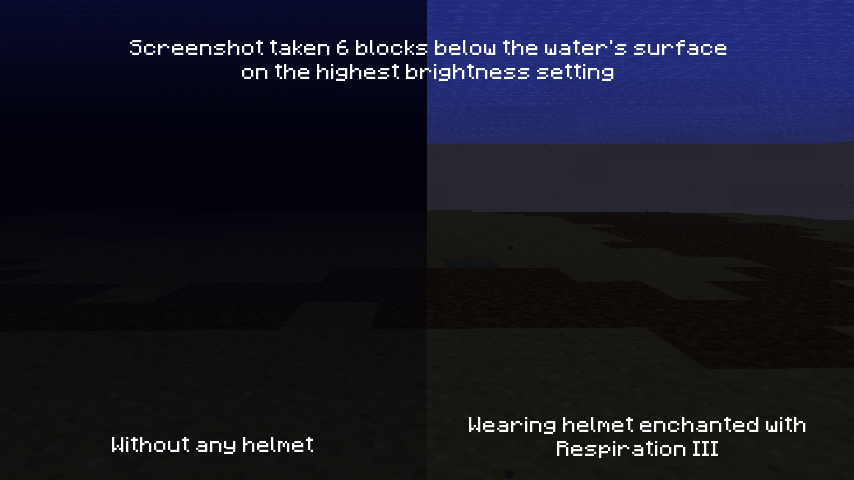 For more details, visit the MineCraft Wiki page on Enchanting.

If you want to see more clearly in water without needing to resort to mods, a Potion of Night Vision will drastically help.

The following forum post contains comparison shots of with/without the potion effect (and the water is even more clear if you are not swimming in it, but instead looking down into the water from the surface):

1
Why can I move water in Minecraft SMP Alpha?
2
Is there a mod / bukkit plugin to fine-tune mobspawners in SMP?
5
Will Minecraft Servers Detect Mods?
11
How to clear laggy chicken farm
4
How does this spawner farm work?
3
Minecraft is Laggy and Slow
2
How do I get a Minecraft texture from the id?
2
Is there a way to hide the item tool tip when you hover over it?
0
Can I make invisible lights?
6
How to make the "New Crafting Recipe Unlocked" text in the corner say "New Blueprint Synthesized" instead?