Can I see how many enemy troops remain mid-battle?

When I get caught in a massive siege, with many hundreds of attackers, it would be really nice to check on the number of enemies remaining to fight during the battle. Can this be done?

Yes, if you press the backspace key during battle it will pop up with what is variously called the command interface, tactical menu or backspace battle map.

What this looks like and what information it displays varies between mods but in my experience it always shows: 1) A minimap showing the locations of your troops, ally troops and enemy troops in different colours. 2) A table telling you how many of your own and your enemy's troops have been killed, knocked unconscious, routed and remain in the battle.

The tactical map is incredibly useful because you can click with your mouse to direct your selected troops to any location on the map. This means you can order your troops, particularly cavalry or skirmishers which you want to harass the enemy rather than engaging in prolonged melee combat, to move around without having to be there yourself. This is vital for infantry characters.

Here is a picture of the tactical map I pinched from Nexus Mods: 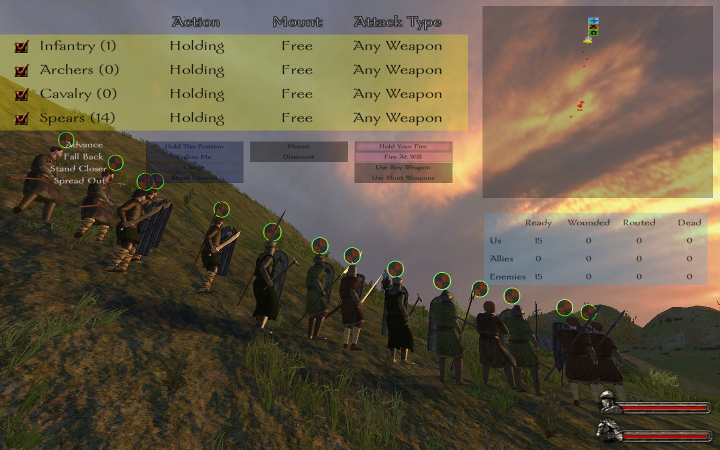 Not the answer you're looking for? Browse other questions tagged mount-and-blade-warband or ask your own question.

16
How do you win against the superiority of NPC Lords?
4
Advice for fighting multiple enemies at once
7
Mount and Blade Warband: Never awarded the correct points
9
Mount & Blade Warband - Question Regarding Feasts
0
How can I order my troops to a specific location?
0
Does Mount and Blade Warband have cheats to allow me to besiege a castle on my own? If so, how can I enable and use these?
5
Do my troops recover fully after each battle?
4
Problem defending Tihr