How do I use my second move in Pokemon GO?

I was looking at my Pokemon's stats when I noticed that my Pokemon actually has two moves available.

However, I could only use the top move in a recent Gym battle. Why is this?

Also, what do the blue bars represent?

Updated the battle interface to include a dedicated button for performing a Charged Attack.

Using an image from Google images, you can see this new button, along with the charged bars which were once on the top left, on the bottom of your screen. 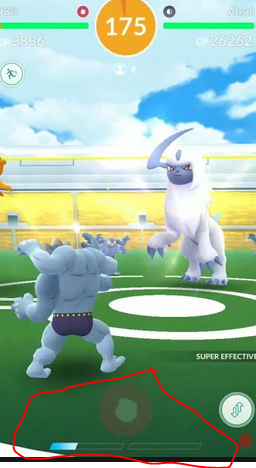 Please see wondercricket's answer for the new way of using a charge move.

To use a Pokemon's second move, you must press and hold on the Pokemon during a battle. The screen will "shrink" and gain a letterbox effect, and the Pokemon will use its second attack.

However, the second attack can only be used when it's "charged" by using regular attacks repeatedly. During a Gym battle, you can see how charged the attack is by looking at the blue bars.

As you can see by the screenshot in the question, there are two bars. This represents that you can use the second attack twice, provided both bars are charged.

The bars represent "Charges" of your special move, you can store up charges of special up to the number of bars, with smaller bars filling quicker. Essentially you could have 1 bar dealing 100 damage, or 4 bars dealing 25 damage and they would take the same time to fill up, but you would cast the 100 once and the 25 4 times.

Hold attack to use it when charged.

You're inventing new rules. Two bars means you need two bars to perform the attack. Damage will be 50 per attack as always.

43
What is the difference between the dashed and solid attack bars?
1
How do I interpret the “Move” information for each Pokemon?

3
Why did I get kicked out of a Pokemon Go gym that was the same team as me when it was only a level 3 gym?
3
What is a pokemon's “Level” and it's purpose?
4
Can I make my low CP pokemon the top defender of a friendly gym?
1
How are my Pokemon selected to enter gym battle?
3
Why can't I win gym battles?
2
Are the bottom-most Pokemon in a high-level Gym the most important ones?
4
Are lower DPS fast moves better for defending Pokemon in gyms?
11
How does the changing of weather affect Pokemon that have already spawned?