Why do I get threat for being a ruler?

Why does "Ruler of Armenia" contribute 1% to my threat whereas the other king titles and my empire title does not? I'm not even holding the title king of Armenia anymore I gave to one of my vassals. 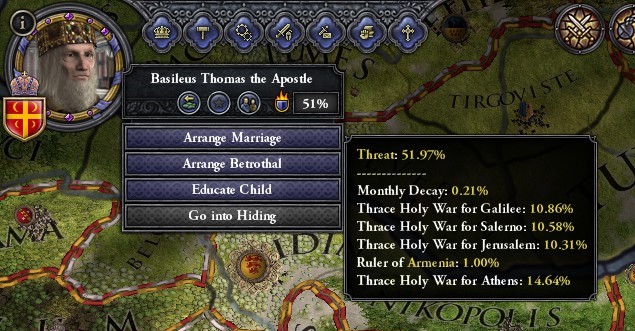 You are receiving 1% Threat from being the Liege of Armenia. When a vassal (such as your King of Armenia) generates Threat a portion of that Threat is also added to their liege. Odds are the King of Armenia recently won a relatively small war that expanded his territory (or inherited land, or vassalized someone).

3
Which succession law applies to king/duke/count titles held by an emperor?
6
Can I set the Crown Laws in other parts of my realm?
4
Exceeding the Duchy limit, Kingdom Titles and when to create or not create titles?
3
Why didn't gavelkind split three kingdoms?
2
How can I easily consolidate dynasty holdings under one ruler?
6
How to quickly revoke all titles?
5
How can I keep my Kings from fighting each other?
6
I'm regent for my king, now what?
1
Why I can't grant a duchy to a count?