Is it possible to come out of your mmr bracket in dota?

Once you've been assigned a certain MMR, how probable is it to improve it?

As far as i know matchmaking works in a way that probability to win of each team is 50/50. On a long run u will lose as much games as u will winn, so it should be very hard to leave you mmr bracket.

First off, dota does not balance games so your probability to win is defined at 50%, this is a common misconception. Rather, your probability to win is 50% based on your - and your teammates / opponents - past performance under several assumptions, most of which won't be true in a real-world scenario. E.g. If you decide to pick nature's prophet, farm up a rapier, and teleport into the opponents' fountain it's likely to be much lower (and earn you somewhere between 3 and 10 reports). The system won't account for this. Thus the 50% general rule is more of a natural consequence of the rating system, and based around the assumption none of the players in the game is over- or underrated. Dota balances games with the following goals in mind:

The matchmaker will try to achieve these goals as best it can, with goals towards the top of the list being the more important ones. For example very high or very low MMR will increase your queue time as the system will take more time to match you with suitable opponents and teammates.

Yes, it is possible to alter this score significantly. The very simplest way to imagine this is if you were to swap your account with someone who is 2,000 points below you. At this much lower rating, you're likely to win 90% of your games or more, which will steadly increase your rating.

For most players, getting better relative to the general populace will gain you some rating points, as well as the converse.

Unless you pick up and retain a lot of bad habits from this experience your rating should fairly quickly get back to its original level.

MMR is roughly based on the Elo rating system.

Recently, someone did a Survey of players' MMRs. Currently, the distribution has somewhat more of a long tail to the right. Also, this survey has an average that is quite a bit higher than the real mean for dota players (which is around 2,250) because it has a natural bias; higher skilled players are more likely to register their MMR with external parties.

The real curve will look quite similar, but with a centre around 2,250 and similar standard deviation. 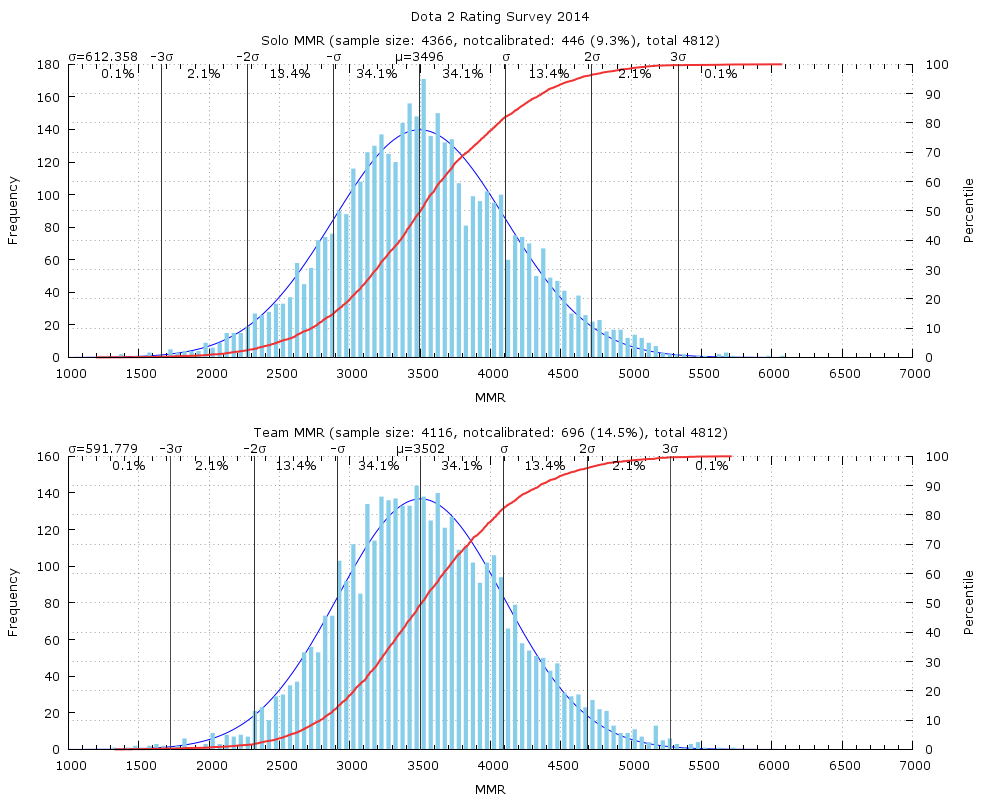 The explanation for the 'long tail' to the right is due to dota being a team game and there being a 5-point minimum gain after a game. Essentially, to explain the former, what will happen is that the game will match players that are at say 8,000 MMR with ~4,000 rated teammates against ~4,800 rated opponents. However, in general the positive effect of having one (or two) really good players outweighs having worse others (it's the nature of the game). These two effects create a long tail among the ~1,000 best players while one really would not expect anyone to exceed about 5,500.

The five-point minimum coupled with no 'limits' as to the maximum diffrence in skill between the two teams means that extremely unbalanced games give the team that was expected to win too many points if they do, according to the classical algorithms.

Even so, there comes a limit where a game is literally unwinnable / uncarryable, even for someone like for example w33. Whatever MMR delta between the other players that is is where the maximum lies. (My guess is around 2 standard deviations, times 4 (4 others), or 4,800 points above the regular maximum, so somewhere between 10,000 and 11,000).

For additional information, you can visit the official wiki articles on Matchmaking and Matchmaking Rating.

18
How to counter Anti-Mage late game?
3
Overcoming a ceiling in skill level
1
How can I be more comfortable being squishy?
1
Dota 2 Team Ranked Match Making Ranking (MMR) spread
3
Looking for a specific type of dual lane
7
How do I see my dota 2 MMR?
6
How can I boost my Solo MMR in Dota 2?
3
Which camps are possible to pull now in dota 2?
2
How does recalibration and rank promotion work in Dota 2 Season 4?
0
How is Dota 2 MMR calculated after Role Rank is implemented?