What is this blank space on the Pokemon Summary page?

Looking at the details of my Pokemon, I see a blank space between the date I caught it and the "transfer" button. 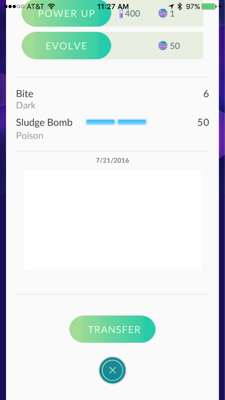 What is this used for? Should something be in this space that I'm not seeing?

Typically, the Map would be there, indicating the rough location of where that Pokemon was caught or its egg was collected.

However, due to the overwhelming traffic from players, the map and the "footsteps" were removed in order to relieve some of the pressure from Niantic's servers. Both of these features will be added back once the game calms down and Niantic gets more servers to run everything they need.

When the game first was released, I remember that spot being used for a cropped image of a map to indicate where you caught the Pokémon. However, I just opened the app, and I'm no longer seeing a map either. Probably a bug in the latest version of the app.

-1
Pokemon Go not showing where I capture the Pokemon

5
How do I fix "GPS not found", "failed to detect location"?
9
Why do I sometimes see leaves but no Pokemon appears?
7
On the swarming behavior of Dratinis (or other rare Pokemon) in the wild
8
How to throw a Pokeball far in Pokemon Go?
2
Does a pokemon caught at an early level reach the same potential as a pokemon caught at a high level
5
Pokemon Go, at low level (11) is it worth checking my pokemons IV before dumping them?
30
How to know if a Pokemon is a Ditto?