I live in Germany, where the game is already officially released. I bought Note 4 with Vodafone in Germany. Since I bought the contract and the phone I have never left Germany for almost a year.

And yet the Play store does not have the game. It is not listed.

When I search for the game on Google, it finds the link to the Play store. When I follow the link I see the game, but it claims it is not available in my country.

The game is released in Germany already for a while now.

If you can't see it in your device's app/play store your device is incompatible with the game or you maybe have entered an incorrect location in your google account. (Not sure if that matters for the play store and they look it up by IP. If that is really the case you should change your account settings to Germany.)

You can login to google on your desktop and use the desktop page of Pokémon Go (link). This should tell you what the problem is. If you click on install you even get details: 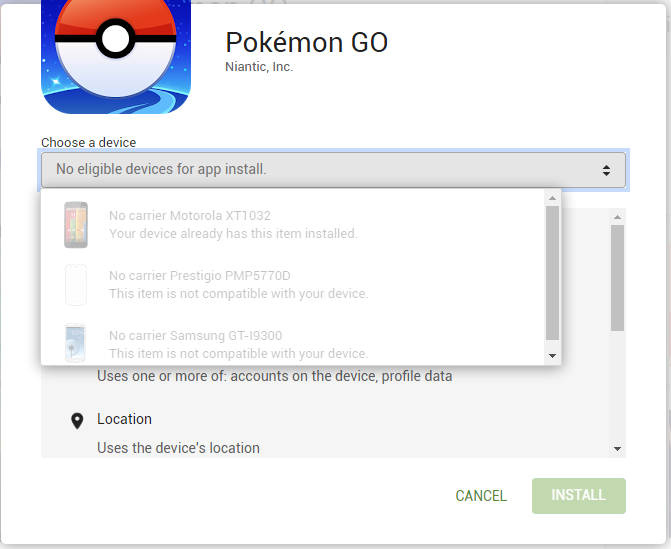 In a nutshell, Niantic drastically underestimated the game's popularity, and when they initially released their servers collapsed under the massive load.

They wheeled back release and restricted it to a limited number of countries while they're frantically expanding their infrastructure to keep up.

There is currently no information available as to when they'll release in other countries, although I can confirm that the .nl release happened sometime last week.

1
Visiting New Zealand, unable to install
16
Can I play Pokemon Go in a country that I am visiting?
4
Why is my street map in pokemon GO accurate even when GO is not out for my country?
1
Why doesn't Pokémon Go connect to my Google Account when I log in?
0
Unable to find Pokémon GO on Google Play Store
1
No Pokestop's, Gyms nor Pokemon appearing in a non geo-blocked region of China
14
Pokémon Go doesn't work on data
5
Android phone - logging into Pokemon Go account without adding the Google account to my phone