Is there a way to transfer more than one Pokemon at a time?

Is there a way to transfer more than one Pokemon at a time to the professor? Or possibly an addon that gives me this ability? Vendoring all the trash Pokemon for candies individually is really annoying and time consuming.

In the version 0.49.1 Andorid/1.19.1 iOS, Niantic released the ability to transfer multiple Pokémon at once

Trainers will be able to transfer multiple Pokémon at a time to Professor Willow. To use this function, press and hold on a Pokémon.

This also allows for transferring multiple different Pokémon. So you can transfer both Pidgeys and Weedles to receive the number of candies respectively. 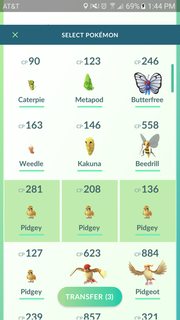 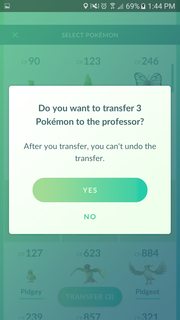 There is currently no way to transfer more than one Pokemon at a time to the professor.

This is probably intentional. The support docs warn that once a Pokemon is transferred, there is no way to get it back. The lack of this feature might be to prevent accidental bulk releasing of your Pokemon.

No. As of version 0.31.0 their is still no way to bulk transfer Pokemon. The reason is most likely to ensure you do not accidentally transfer a pokemon you do not want to get rid of.

They did make it easier with the new update. It takes one more button press, however, the slide down to the bottom and transfer was generally laggy. Especially for android users. They also got rid of the map showing where you caught the pokemon that would load last causing an even more troublesome time of getting rid of the pokemon.

Hoping that niantic does add some sort of bulk transfer feature in the near future.

Be careful when transfering though, some pokemon that have a lower starting CP can sometimes have a better move set. Maybe Niantic is trying to encourage the player to look at each Pokemon before ditching it.

1
Can I transfer multiple Pokemon at once?

1
Do I have to give the professor my Pokemon in order to evolve?
17
Limit on how many candies you will receive?
5
Not getting candy for Pokemon transfer
7
Is there a way to tell how many of a certain Pokemon I have caught?
1
Is there any benefit to increase gym levels other than adding more pokemon?
1
How to find out if you already have a pokemon and transfer out weaker one
8
Pokemon Go transfer issue