What are the regional Pokémon? 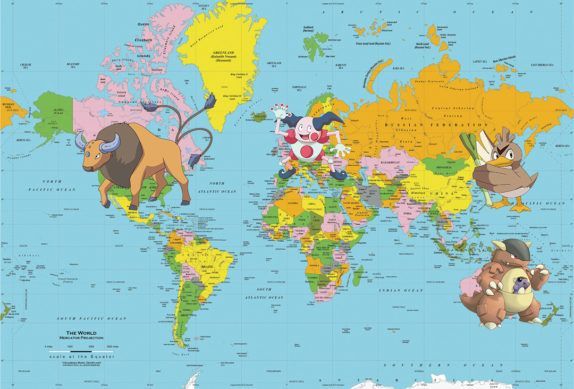 Several communities confirmed those (including The Silph Road), Niantic didn't.

(*) South America is likely to have Tauros as well. This has been posted on Reddit several times (Tauros apparently got caught in Brazil), but not enough to confirm this as true. Feel free to update this once there's proof. Until then this stands as Tauros is for North America only.

Reddit's r/TheSilphRoad subreddit has updated a regional map for Generation 2. 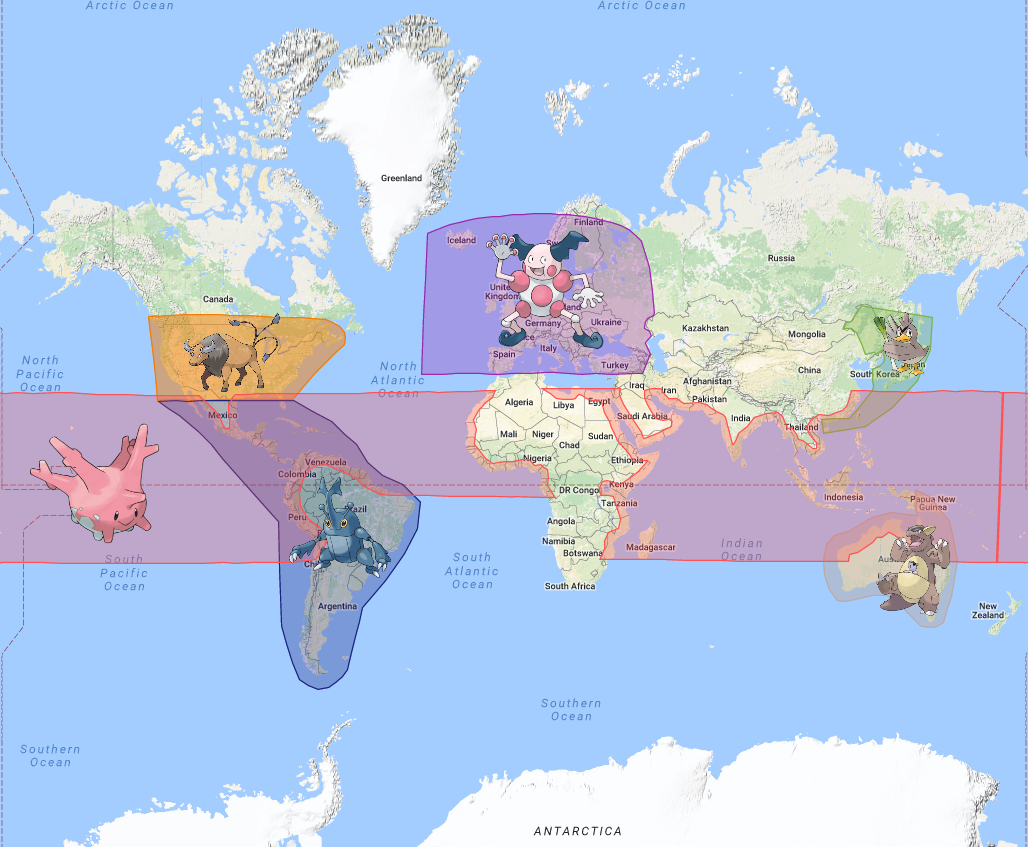 This image shown here is constructed from this link, supplemented with images from Bulbapedia. The link includes some details about these boundaries, which I will add below.

Covers all major Canadian cities, no further North than Calgary, somewhere between 51˚ and 52°N, but the North East section might be a little more unclear. South as far as 29˚N. Heracross starts where it stops

Reported as far North as 61˚, does not cover all of Norway. Not found in Gibraltar but in Northern Tunisia. Found in Sicily but not Malta. As far West as the Azores. South Eastern border a little more unclear but as far East into Russia as Kazan

All of Japan, South Korea, and reports of Vladivostok and Eastern Russia as well as areas of Northern China. Covers all of Taiwan. Covers all of Hong Kong and any areas of China South of there.

Covers Australia, including Tasmania, as well as Papua New Guinea.

No higher than 31˚N and not found more than 300km inland, southern limit still disputed. 26˚S in Australia, Chile, Madagascar and Mauritius, but lower in Brazil. Confirmed in Nairobi most likely due to Lake Victoria being such a large body of water.

Starts at 29˚N and covers the Caribbean, Central and South Americas. Most likely reaches all the way to the Southern tips of Argentina and Chile.

Note that an alternate map slightly adjusts the borders, with it being notable that Corsola do not exist very far inland. The Tauros border also extends farther north into Canada, although not completely covering it. Farfetch'd also covers more parts of China.

Credit to u/oktimeforplanb post on r/silphroad (With their image at that link).

I have caught several wild Tauros in California. Someone also told me that her husband hatched a Kangaskhan from an egg here in the US.

I have just disproved this theory that there are regional Pokémon! Mr Mime does in fact spawn in the US! I have recently found him in my home state of NJ. So this leads me to believe that the others spawn within the US as well.

14
In what countries are region exclusive Pokémon available?
6
Where is the Farfetch'd?
6
What are the exclusive pokemons of each region on 2nd generation?
1
What is the "regional Pokémon" for south America?
-6
Are there region specific Pokemon?
22
Are there Pokémon that can only be hatched from eggs?

17
Where can I find Ghost/Poison/Psychic type Pokémon?
7
Does CP multiplier roll when evolving affect the max potential of the Pokémon?
16
Can the off-regional pokémon hatch from eggs?
22
Are there Pokémon that can only be hatched from eggs?
34
How does the new catch bonus work in Pokémon Go?
19
Are all variations of Unown in Pokémon Go?