How do I get to Orgrimmar from Silvermoon City at level 11?

I have a level 11 Blood Elf and want to spend some of my honor points. I've heard that I could spend them in Orgrimmar, but the only problem is getting there.

How do I get to Orgrimmar from Silvermoon City? I'm not in a level 25 guild, so nobody can teleport me there. :(

In Silvermoon City you need to go the Sunfury Spire, pictured in the map below (it is near at the top of the map, near the middle). The Inner Sanctum has a teleport which will take you to the Undercity. 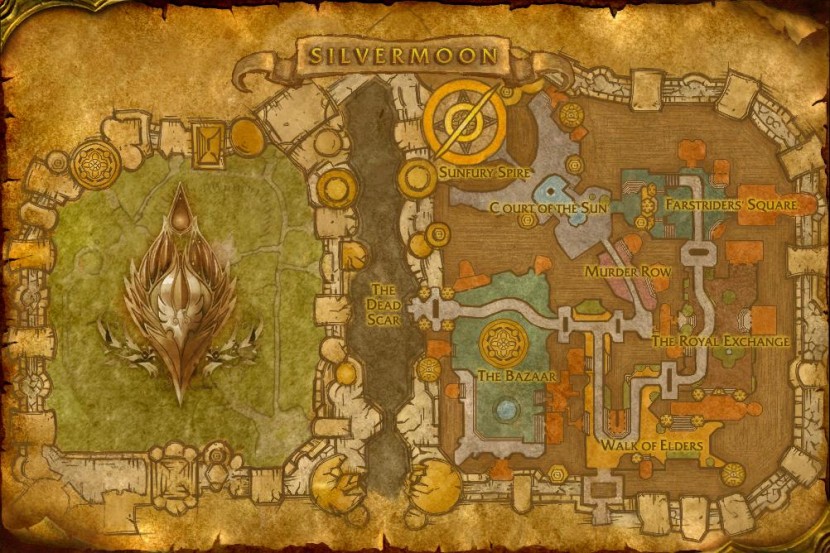 Directly outside the Undercity are zeppelin towers, pictured below. The tower on the left in the picture will take you to Orgrimmar. There are Goblins at the front of each landing pad who will tell you which city this zeppelin is for, and where it is on its trip (intended to give you an idea of how long you'll be waiting). For example: The zeppelin for Orgrimmar has just left Orgrimmar. 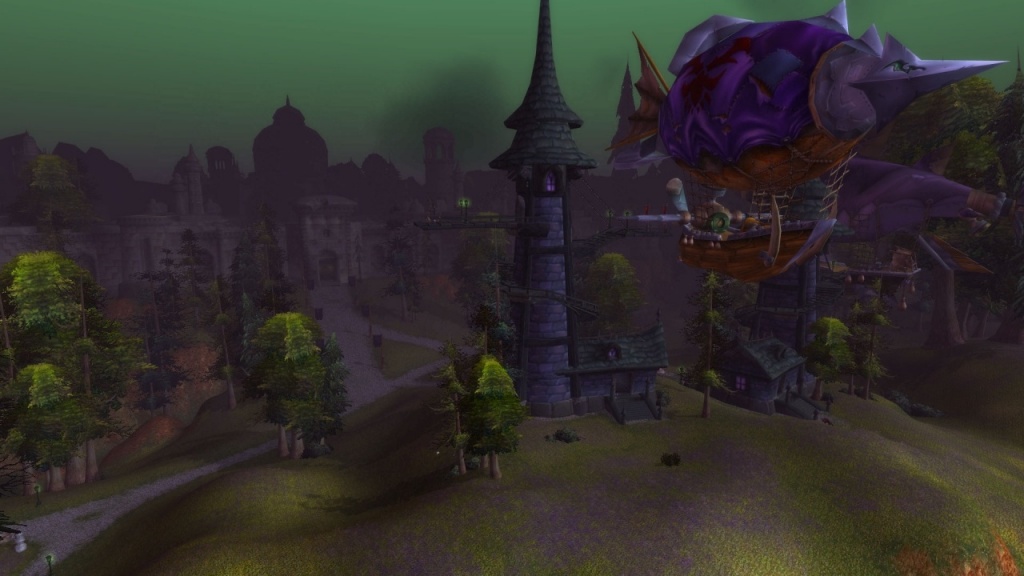 For anybody who finds this as of June, 2019 there is now a portal to Orgrimmar located on your right as you enter Sunfury Spire.

This is very easy simply go to Silvermoon City and go to the Sunfury Spire, go into the room at the back and there will be a portal that will take you to the Undercity. Leave the Undercity through the main gate and you should see the two zeppelin towers board the zeppelin to Orgrimmar and your all good

If the Darkmoon Faire event is currently active, just ask the fairy lady to teleport you to the fair staging area, which is right outside Thunder Bluff, and from there it's pretty easy to get to Orgimmar.

To sum, go to Silvermoon city. Northwest of the city, in the back, is a place called Court of The Sun. If you walk in to the building at the Court, and keeping heading to the back, you'll find yourself at a spiral staircase that leads up to a big, gleaming red ball, called the Orb of Translocation. Right click it and you'll translocate to Undercity. Right outside the entrance to the city, in the north, is a zeppelin tower. Walk over to it, up the stairs, and wait until the zeppelin to Orgrimmar comes. You'll know when a red highlighted sentence comes up saying "The zeppelin to Orgrimmar has arrived! (or something along the linesa of that)" Board the zeppelin that lands, wait a minute or two, and voila! You're on your way!

Just go to Silvermoon and up to the Sunfury Spire, go to the first room on the right, the mage room. Then there is a portal to Hellfire Peninsula, go through the portal and right on top of you is another portal to Orgrimmar. Very simple, no need for a zeppelin.

The first thing you’re going to want to do is to take off all your armor and weapons.

From Silvermoon City, find the nearest road and begin following it generally south. (If the road you picked curves AWAY from the south, you may need to run overland to another road.) At some point a monster will begin attacking you, at which point you can either kill it or just run past. Eventually you should arrive in the Ghostlands, which have a long road from the north to the south which you should follow. The south end of this road connects to the Eastern Plaguelands; your objective here is to follow the circuitous path from the Ghostlands area transition around to the bridge to the Western Plaguelands on the south-west border of the region. If you don’t know the way, it’s relatively easy to just always turn right whenever you get to a fork in the road; doing this from the beginning of your entry into the Plaguelands will eventually bring you to your destination.

(At some point before you found your way to the Western Plaguelands, you almost certainly died. Do not panic: this is normal. You should be standing in a graveyard. If you look on your minimap, there will usually be a red arrow pointing the way back to your corpse. You can either follow this arrow toward the gravestone icon and respawn at your body, or you can simply continue your journey toward Orgrimmar. I recommend the latter course of action: you’ll find your journey far easier, but you’ll have to tolerate a period of statistical diminishment at your destination and, depending on whether you followed my advice about taking off your equipment, you may also have a minor repair cost. If you choose to respawn, you run the risk of just dying again, adding considerable time and energy to your trip. On the other hand, running around as a corporeal body gives you the opportunity to unlock new flight points you run past, as well as earn XP by entering areas you’ve never seen before. I’m not sure whether the XP rewards are also available as a spirit.)

Continuing from where I left off: you should now be arriving in the Western Plaguelands, preferably as a ghost. Point yourself generally toward the west and hold down the W key (or whatever your keybinding for ‘walk forward’ is). Assuming you take the time to jump over or move around obstacles as they approach your character, you will wind up in one of several locations: Eversong Woods, Hillsbrad Foothills, or Silverpine Forest. If you find yourself in Hillsbrad Foothills, follow the path south and to the west until you get to Silverpine. Once you’re in Silverpine, walk north toward Eversong Woods—and if you arrived in Silverpine directly from the Western Plaguelands, you’re probably in the lake, so drag yourself ashore and strike out northward.

Once you’re in Eversong Woods (however you managed to get here), hit M—or whatever key your map is bound to. On the map, draw an imaginary line between yourself and the middle of the map; this is the approximate heading you’ll want to use. Face in that direction and begin walking; travel here should be no more difficult than it was around Silvermoon. You’re looking for the Undercity, or more specifically, Brill; you can find them more easily if you enable “Points of Interest” on your minimap. Brill’s just to the north of Undercity; between the two locations is a pair of matched towers. Climb one of them and wait for an airship to arrive. Walk on board.

Depending on which tower you climbed, you'll either find your airship deposits you in Orgrimmar (in which case, congratulations; click Return to Graveyard and revive yourself, which should bring you back inside the city—or at worst, in the town of Razor Hill, immediately south of the city) or Howling Fjord (in which case, just wait on the airship until it returns to Brill, then descend that tower and climb the other one).

I hope this helps!

Not the answer you're looking for? Browse other questions tagged world-of-warcraft .

2
How do I get to Orgrimmar from Silvermoon?

3
How should I spend my points and acquire gear?
5
Alterac Valley Bonus Honor
2
How to get better gear as a high level character?
11
How much home city reputation does each dungeon give while championing?
5
Why do I have Honor Points even though I have never done PvP?
1
Where are all the legacy justice / honor vendors?
0
Your artifact is at full power