How to beat organised turret defenses?

Recently I've noticed a severe increase in compositions consisting of one Torbjorn and on Symmetra, particularily on Volksaya Industries. (Usually a D.Va too).

When queuing with 2 friends and 3 randoms, this poses a difficult problem, as there are very few setups that can reliably dismantle this defense- especially when the enemy team is clearly using voice chat.

What kind of compositions can take on this setup (with the turret initially placed in the defending side building that opens onto the point (Red/A on diagram), then moving the turret to the little bunker facing away from the attacking spawn when the flankers start to adapt(Orange/B on diagram))? Snipers and Pharah struggle to pip the turret because of the range, and are incredibly vulnerable to Orb of Discord, and Winston gets shredded by the big turret as he melts the little ones.

This is the setup I'm talking about. There are very few flank routes that can allow you to safely take out these positions without exposing yourself to covering fire or the enemy team. 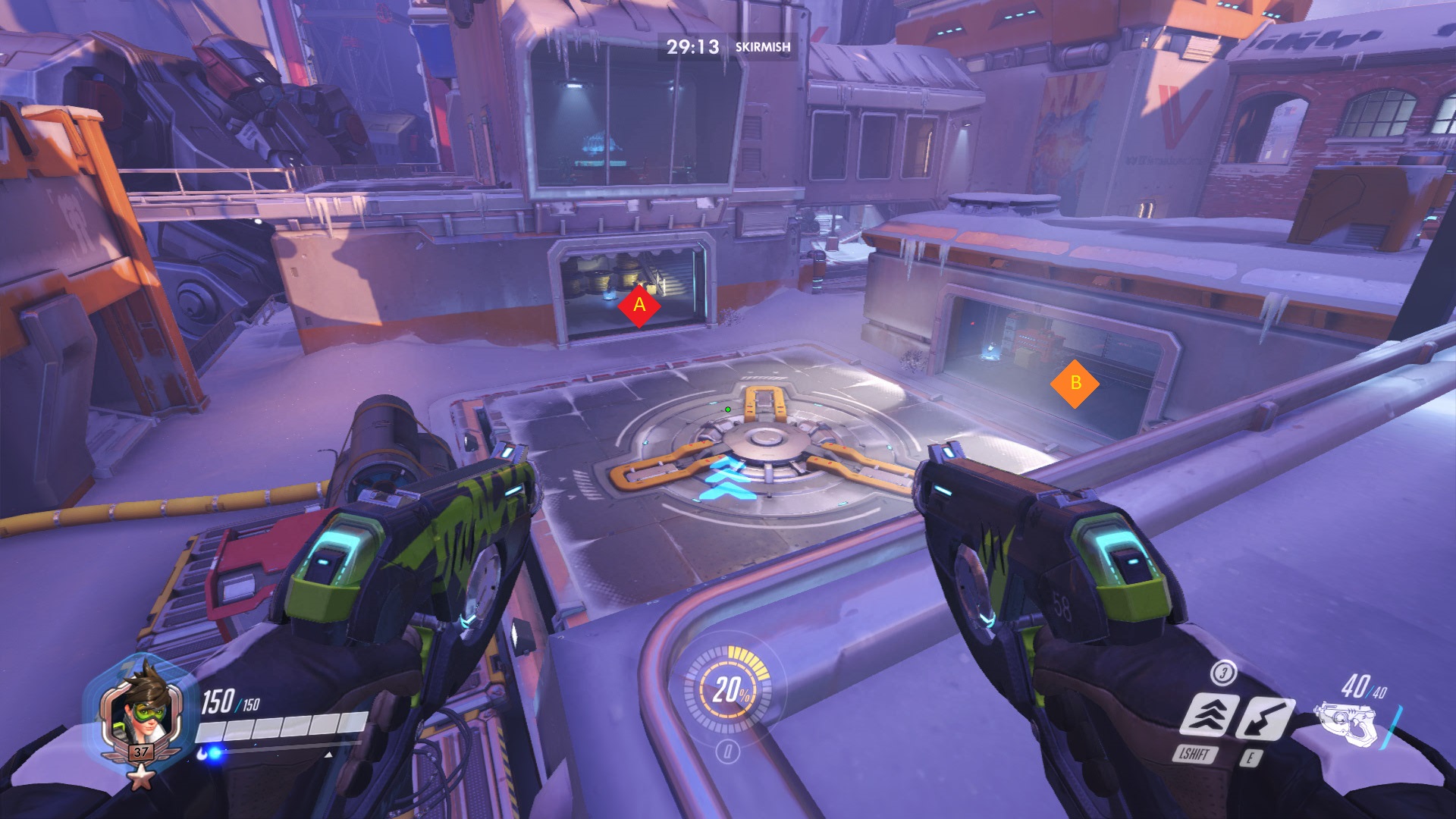 My favorite hero to play against multiple turrets is Junkrat. He can launch his grenades into hard to get to places and deal quite a lot of AOE damage to help push a Torbjörn off from repairing his turret and to destroy it. He can bounce them off walls into room where turrets are setup, or launch them far enough to hit the turret over a wall at the turret from relative safety. Killing Symmetra turrets is a little harder with Junkrat, as they generally aren't on ground level, but if you have a tank or healer with you, it is a bit easier to clear out rooms.

Another person who is pretty good is S76. He has pretty solid mid range damage, and if he has a tank, he can usually pick off a Torb turret with a helpful rocket after shooting it a bit. He also can drop a health pack for himself to help tank it if he is alone.

41
Which heroes can clear this jump on Volskaya Industries?
18
How to counter a team of multiple Torbjörns?

12
Can I remove a specific turret when playing as Symmetra?
20
Does it matter which way Torbjörn's turret faces?
8
Is Torbjorn's turret destroyed upon death?
13
How to upgrade Torbjorn's turret?
13
Does Torbjorn's turret have a range?
11
What strategies are most effective for Symmetra turret placement?
4
What is the range of Symmetra's Sentry Turret?
9
How do you counter a heavy Torb/Bastion defense on Hanamura B?
0
At what point will the turret benefit from Molten Core
17
How does Torbjörn's turret choose its target?