Why won't an NPC go into his house?

So, today the Demolitionist appeared, and night has now fallen, but instead of going to the cosy NPC friendly house I had ready for him, he seems to constantly wander between my house and the guide's house (which actually has an empty floor that he could move into anyways).

See this picture for detail: 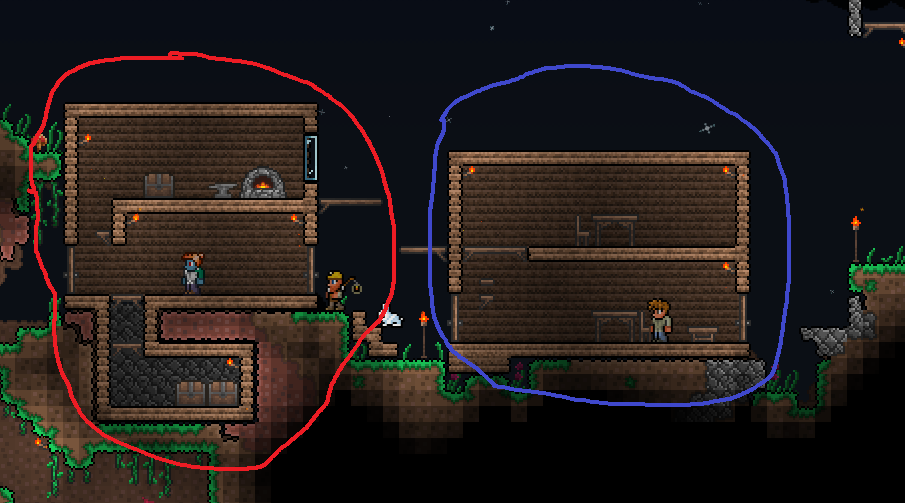 As you can see, the demolitionist seems torn between my humble abode (circled in red), and the house of the guide, who has a free floor anyway (circled in blue). He won't settle anywhere, not in the empty floor in the guides house, or the lovely house I had build in anticipation of his arrival thats off screen to the right.

The noise of him constantly shutting and opening the doors is driving me insane, and the dark thoughts of going on a quest to find lava and commit demolistionisticide are growing even stronger with every second.

If your demolitionist has claimed a room offscreen, you may need to go far enough away that he teleports 'home'. He's not going anywhere because he can't reach his house in the first place.

Kill demolitionist with lava. Then he will respawn after some time. And maybe he will choose more desirable place :-)

When NPC begin to live in house not suited for him, I kill NPC and destroy chair and table. And in next time NPC chooses another house :-) After that I place taken off object on their place.

P.S. Magma is a solution for every problem :-)

For me, the issue was the middle of the room was too dark, so I just added more torches.

For some reason, It will say that its suitable instead of saying it needs light source.

If you are trying to get the demolisionist to move into a house which is on an upper floor, I find the easiest thing to do is to build a wooden PLATFORM staircase up to his room. You can make this go as high as you want. You will need a background wall too by the way. If he simply won't move into any house, lower floor or upper floor then the room either isn't valid (in which case you will need to make sure all the walls are filled in, there is a table, chair and torch. You can check if a room is valid by checking in the housing menu) or he legit can't reach his house, in this case you will have to make it easy for him to reach.

you can go to your inventory and click the pixelated picture of a house and click an N.P.C, then click on the house you want him or her to go to, but before doing that, build another home for the N.P.C who's living in the house and move them to that empty house if there is one living there. If not, make sure that everything that is needed for a house to be a real house, here's what you need: 1.A Door 2.A Table 3.A Chair (or two) 4.And a Light source. (Like a Torch or a chandler, or a lamp)

If you've already set the NPC's flag to the house you made, when night falls, try to avoid having the NPC and its designated house on the screen.

Houses cannot contain platforms for floors, making it an invalid house. Also, there cannot be holes in the walls or floor. A door cannot be placed on platforms, either. Put a door on the right the platforms to make it a valid house.

In end up the demolitionist moved into the house I expected, it just seemed to be taking longer than usual.

So I can confirm that the above setup does in fact work.

magma or get a voodoo doll. which allows you to kill NPC's.. gained by killing a voodoo daemon

20
How can you make an NPC move house?
15
Can I build a NPC house out of Hellstone?
3
Terraria Engineer NPC won't respawn
5
How do I get my NPC back into my house from down a cave?
2
Dead npc won't respawn
2
Terraria NPC house
5
My Terraria NPC will not settle down in a house