How can I automatically replenish custom terrain?

My question is somewhat similar to ( Create a world that would reset ) with a few differences that justify asking a separate question.

I have a server map, where there is a central spawn building(map, rules, spawn point, etc) which is protected (labeled 1 on map). Surrounding that area is a continuation of that seed, which is imported, and different from the world seed beyond that (labeled 2 on map). Beyond that, there is an abrupt change from the imported section, to the world's normal seed, which is a mesa biome (labeled 3 on map). 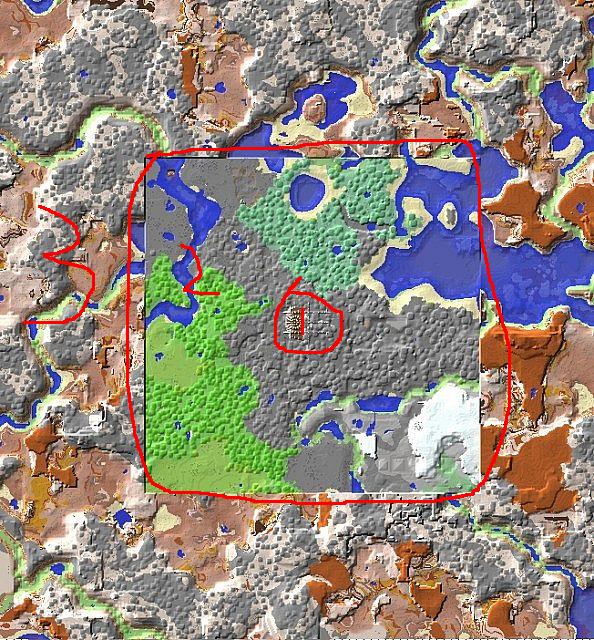 Section 1 is protected from building and mining. I would like for section 2 to be able to be mined and built in, but to reset once every week or so, in order to allow new players to mine and set up temporary bases, before setting out into the mesa biome (section 3) where pvp is enabled.

The main issue, is that the server only has 1gb of ram, and copying and pasting large sets of schematics may crash the server. Also, simply resetting the land to the default seed would replace the hills and forest of the starter area with mesa biome, meaning that repopulating the chunks from the seed wouldn't be possible.

I could increase the server ram from 1gb to a maximum of 4gb, but I would prefer to keep it as is. The current version of minecraft is 1.10, but I could downgrade it as low as 1.7 if required for mod or plugin compatibility. Plugins, command blocks, and mods are valid options, provided that players can log on with the standard minecraft client.

The question: Which of these options (or others I've not thought of) would be the least server intensive, and easiest to set up?

Extra question: If using a method involving schematics, how many regions should I divide section 2 into? 4, 8, 32?

Determine the exact chunks loaded by the second area. The chunk numbers show up on the debugging screen by pressing F3. These chunks correspond to MCA files in the region folder of your save. Copy the MCA files in a permanent location, and, once a week, copy over the current files with your backup, temporarily shutting down the server. A batch file can be used to automate this process, if you'd like.

You can also try to use some Multiverse/Multiworld mod/plugin, allowing you to have more than one map. Then each of those maps will have their own seed (so you can then use seed-based tools to replenish the map, too) and you will be good to go with different maps.

Then the thing is to backup one of those maps (the one with spawn/start area) and backup/rollback it frequently as you need, and use other map to let them fight. Some of those plugins also can give you chance to let players have separate inventories, separate chat and most important - separate permissions, if you use PermissionsEX or similar (per world permissions). All of those can be really handy, also they can separate pvp/nopvp, etc.

All you need is to build at least small "spawn" pod on pvp map, and connect maps with portals (multiverse plugin offers /mv tp to travel worlds, so you can use it in Command blocks or so). Then do file rollback with map you want to have refreshed (be sure no players will get stuck - best to teleport all of them on spawn map to spawn after login or similar - there are answers for that mechanism around on Arqade I think)

However this solution works with the situation that you still are just preparing the server and you can still change your setup. Also I don't know how much updated those plugins are, there is more of them and at least 1.8 versions are around for sure.

Note: You CAN use mods (Forge server) with version 1.8+, allowing Non-Forge clients (pure vanilla ones) to connect the server (Forge 1.7 and lesser required Forge clients even there were no mods on server), as long as the server has only "server-side" mods (so ones that do not add new blocks/items/mobs/guis etc). However running mods AND plugins on 1.8+ is still kinda messy, only Sponge project exists and it is not so smooth (plugin runs on Spigot that runs on Sponge that runs on Forge xD )

Don't use rollbacks. The purpose of rollbacks is to undo griefing and such, so it will also take away farmed items. Also regular players will remember locations of diamonds, ores, etc. and get them over and over again, if you keep the same seed.

Here is how we do it:

This way you don't have to copy/paste/regen a huge territory, which causes lag or takes a lot of time. Creating a new map is pretty much instant. It will have to regenerate its chunks as well, but unless you're going in with 20 people at once while it's generating the chunks it should still be more efficient.

Another big plus is a completely intact main world. Your guests will most likely love to see something cool instead of 100s of holes and mining shafts when they join your server.

...and you don't have to reset it every week, because there is a complete map of space to farm on.

You can try to use MCEdit in order to manually remove the chunks from the mining area and regenerate them. Be careful, the deleted chunks may regenerate as the original seed's chunks, instead of regenerating the imported chunks back. Important notice: MCEdit supports Minecraft versions up to 1.9, so you will need to downgrade your server a little...
Or you can try to delete those .mca files, as @khanzarate said, except the "r.0.0.mca", which stores the tiles from 511 on the Z coordinate to -511 Z and from 511 X to -511 X.
Expand / Shrink the central building to occupy those tiles. Delete the files from "r.0.1.mca" / "r.1.0.mca" to "r.2.2.mca" or to "r.3.3.mca". You can use an app to delete them once a week, for automatization.

2
Create a world that would reset

11
Where are biomes saved in minecraft?
2
How can I change where strongholds spawn?
3
How can I merge multiple maps?
1
Random Minecraft Seed not containing new biomes
0
How does biome generation work in 1.8 snapshots?
4
Can I download a server world and build on it locally?
0
Disabling command block output in the console
1
Do World customizations affect the seed?