Will US Genesis or Sega Saturn controllers work with my EU Mega Drive?

I live in Spain and want to expand my Mega Drive collection. However, my controller does not work properly. My question is: Will Genesis (US) or Saturn controllers work with the Mega Drive?

While @Fana's answer is correct for whether a US controller will work on an EU system, it might also be possible to repair your current controller rather than replacing it, (depending on what is wrong with the controller).

One of the more common problems (and the easiest to fix) is that the buttons don't work (or only work intermittently). The most common cause for this is degradation of the Rubber Domes that provide the button 'press' and 'depress'. After 20+ years, these domes can degrade to the point of splitting or flaking apart, meaning the button no longer 'springs' back into place, or doesn't actually make an electrical connection with the button at all.

Luckily, these rubber domes can be cheaply and easily replaced.

You can get replacement domes for both 3-button and 6-button Mega Drive/Genesis controllers, either set will run you about $2 USD, plus some shipping. The rubber domes look like this: 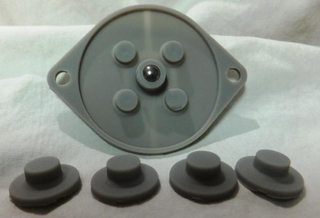 For the 3-button pad, The big dome with four buttons is for the D-Pad, and the other singular buttons are for the main 'A B C' controller buttons and Start button.

The 6-button controller is a little different: the X Y Z, A B C buttons are now handled by the large rectangular piece. The D-Pad also only has one side-hole to orient it and hold it in place

* Note that I'm not affiliated with Nintendo Repair Hut, and that you can get these rubber domes from other suppliers as well, I'm just using them as the example as it's who I contacted to get my replacement rubber domes from.

To replace the domes, you'll need a Phillips-Head screwdriver to open up the Mega Drive/Genesis controller.

If the controller is now working better, congratulations!

Yes they will, all the genesis controllers have the same plug.

Fun fact, you can also use a Master System controller or a C64 controller which all have the same ports (although the Master system / C64 only have 2 trigger buttons).

You can use controllers from master system, Atari, and Mega Drive (including US genesis) of any contries on your Mega Drive.

The controlers are compatible between all old consoles (except of nintento). Evenn Atari controler (wich has less buttons than mega drive) will work for games like Sonic where you dont need all buttons.

Not the answer you're looking for? Browse other questions tagged controllers sega-genesis .

6
Will a normal electric guitar work with Rock Band 3?
4
How to fix USB gamepad problem with Sega Mega Drive (Genesis) Classics 1
2
Will a Sega Genesis cartridge work on the 32X
3
Genesis and Mega Drive Classics Collection: PAL or NTSC versions? Are games in these two packs the same?
2
How to play local coop in Victor Vran with two X360 controllers on a Mac?
0
Can Xbox One S and DualShock 4 controllers work over bluetooth at the same time?
19
What system is this controller for?
9
Can you identify this Sega Genesis (Mega Drive) game from 1991 or before?