Is there a way to create a water item-slide from a creature-trap without chickens passing through it in Minecraft?

I have created a vertical trap that uses water to drag unsuspecting creatures from the surface into a vertical pit, they literally fall to death.

Well, except chickens, and sometimes spiders.

Right now I have to open a door and enter the trap periodically to recover loot from the creatures.

I would like to set up a water "slide" at the bottom that would make items dropped by dead mobs flow with the water out of the trap and to where I stand. However, to do this I have to open one cube of the bottom of the trap for the water to flow through, and apparently that's enough for chickens to get past. I tried this, and when I got back from dinner, I had about 15 chickens flying around me, outside the trap.

I have created an elaborate drowning tool to handle chickens and spiders that survive, but this of course only works if the mob is still in the trap, and not roaming around outside, and I have to manually activate and deactivate this, so it's not automatic. However, if the spiders and chickens could just stay in the trap, I have no problems with activating this from time to time.

However, I don't want to go chicken-hunting in the cramped area outside the trap.

Is there any way I can set up such a water slide, get the items to exit the trap, without getting the outside of my trap filled with chickens?

Basically, the bottom of my slide, seen from above, was like this:

In this case, everything is covered up, except that the cube just above the S has to be open for the water to pass, and thus the chickens can escape.

Is there any way for me to get the loot, without opening up for chickens?

put a slab on the square you are standing on and leave a 1 square gap in the direction the water is flowing from (use glass if you want to be able to see what's coming). The slab will prevent anything from being pushed through but you will automatically pick up the items as they approach.

Adding a picture to clarify:

The chickens won't be able to move into where you are due to the half slab keeping them in the water tile beneath the glass.

I tried various of the existing answers here, and they didn't really solve anything.

However, what did work was to change the original idea just slightly.

The difference here, from what I had in my question, is that I am standing one square to the left of my original idea. However, since the water flows towards me, all items will end up in the corner butting against me, and are thus just in reach to pick up, even though there is a wall between me and them. This solved the chicken problem, as they now have nowhere to escape.

One option is to remove the chickens from the rest of the mobs during their fall down the vertical shaft. Since chickens gracefully float down instead of plummeting to their doom like other mobs, a stream of water will catch them, whereas other mobs will fall through it. If you build a water stream like in this screenshot (the water is supported by signs), you can filter out all the chickens, and put them in a separate room (perhaps a egg farm). 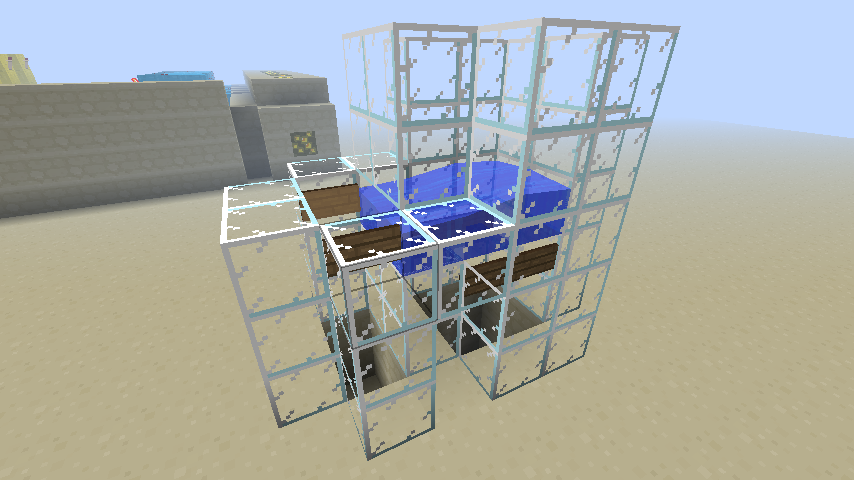 The answer is to use cactus. You need a one block large water slide. on both sides, put a cactus. When a chicken pass trough the slide, it will hit a cactus, and be pushed back on the second one, until it's death.

Your best bet is probably to build a drowning system, as chickens and spiders are one block high. This is my attempt; it probably could be better:

This takes advantage of the mobs' dumb propensity for swimming up if they find water. They'll be dragged into the water column, swim upward and hit the ceiling. Being dumb they drown banging futilly on the ceiling, and their loot will fall down the hole to the lower water stream. In this setup the loot will fall on a pressure plate that also stops the water stream from speading everywhere.

This'll work for chickens. Spiders are a bit more complex because they are two wide. You'll need to make a diaganal water stream at the bottom of your 2x2 drowner, so that your loot will end up in the hole (Top view):

I'd put this "collator" one block below the widened system above, using signs to hold the water up above. There's probably a way to put it on the same level but I haven't though of it yet.

Ethos' tutorial on a drowning system

however, to do this I have to open one cube of the bottom of the trap for the water to flow through, and apparently that's enough for chickens to get past.

Simply use a piston and a lever to block the flow of water when you don't need it.

Couple this with a high latency repeater cycle and you can trigger the piston door every so often (the actual time length depends on the length and setting of the repeaters; the pictured system cycles every ~20 seconds; you might want something longer). 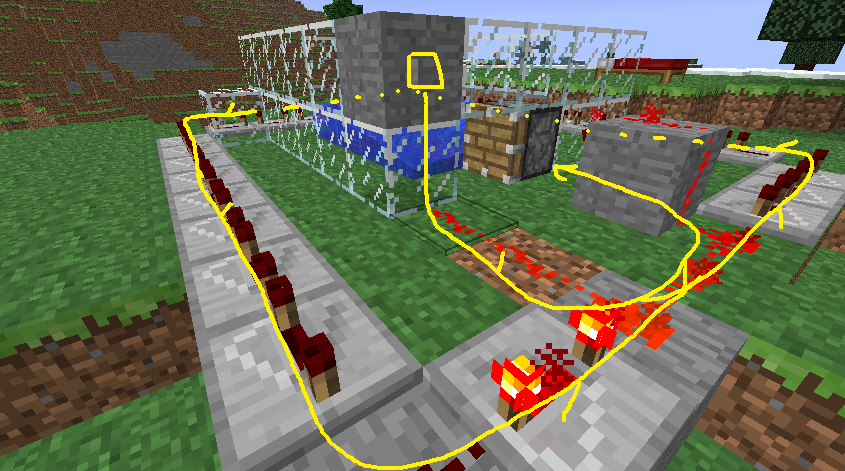 This gives chickens no time to go through, while items slide through the trap only as much as needed for you to pick up.

One alternative way of ensuring that no chickens pass through your slide is to make sure that the source of your mobs has no lit grass for chickens to spawn on. While this probably isn't the sort of solution you're looking for, you might find it easier than redesigning and rebuilding your trap.

38
How do you make an effective Minecraft mob trap?
6
How do I redirect these water currents to get my loot?
10
Most efficient way to farm Slimes?
25
How can I make an Automatic egg harvester in Minecraft?
10
Why can't I get Zombie Pigmen to spawn?
1
How to get spiders to group together in Minecraft?
0
All items not removed from brewing stand in automated brewing system
1
Why are my pistons killing my chickens?
0
Is there a way to prevent water from being placed in front of an observer?