How fast can I travel?

In the new Pokemon Go update on August 8th, the change log (on iOS) said:

Added a dialog to remind Trainers that they should not play while traveling above a certain speed. Trainers must confirm they are not driving to continue playing

I tested it out as a passenger: 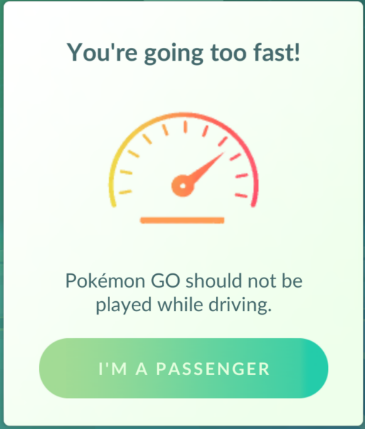 There's been a lot of speculation about this, as it's not clear what the exact speed is. However, from the forums and comments I've read, I'd expect that the maximum speed for distance traveled to count towards hatching eggs is 10-12mph. Here and here state that the speed for egg hatching is ~10mph, from user experience.

As for maximum overall speed, that's a little more hazy. The current hypothesis is that if you can reach a location by legitimately traveling there (whether it be a plane, train, or car), there is a low likelihood that you will be soft banned. Here is a related question that discusses distance and speed while traveling when playing Pokemon Go, with regard to soft bans.

From personal experience, I've played the game in the car as a passenger going about 80mph on the freeway. It is usually too fast to select and swipe PokeStops, but Pokemon do still show up. Granted, it is hard to tap them fast enough to try and catch them, and most of them run away if you don't catch them on the first throw, but it seems that it doesn't induce a soft ban. In Ingress (Niantic's first AR-geolocation game), the speed limit was around 35mph, as stated here. Above that speed, the game would not function. Fortunately, it seems to be higher than that for Pokemon Go.

8
Eggs won't hatch while travelling on a boat
8
How far can I travel before Pokemon Go thinks I'm teleporting?

38
Does walking fast prevent eggs hatching?
8
Is damage from defending Pokemon normalized for slow and fast attacks?
3
Playing Pokemon Go on a fast-moving Train?
8
How far can I travel before Pokemon Go thinks I'm teleporting?
4
Are lower DPS fast moves better for defending Pokemon in gyms?
1
What determines how fast a Main Move becomes charged in Pokemon Go?
6
Which Pokemon Go fast move is this from Rocket's Porygon/Porygon2/Porygon-Z?