Duna: Is it always more efficient to aerocapture than to do a capture burn?

I know this sounds like a dumb question, but hear me out.

Capture burns are obviously extremely expensive because the spacecraft needs to carry a bunch of fuel with it all the way to Duna. However, heat shields are also pretty massive. For larger spacecraft (e.g. a return mission), with large or extra-large engines, and especially with detachable boosters, I'm wondering if the mass of the heat shields might sometimes weigh more than the fuel that would otherwise be required to do a capture burn. My understanding is that heat shields are not required on Duna from low orbit based on the following readings:

This discussion on the KSP forum

But presumably heat shields are important when entering the atmosphere during hyperbolic orbit (right?).

Are there ever situations (given spacecraft mass, descent profile, transfer speed, etc) where having heat shields results in a more massive spacecraft than just doing a capture burn? Regarding this issue, what are the best practices when designing a spacecraft?

The reason I'm asking is because I'm building a mission planning tool and I don't want to make a blanket assumption that heat shields are always the way to go.

I want this answer to be relevant to all players so it is bloated with images and basic stuff. Answer to your real question should be at end.

TLDR: Aerocapture is more efficient most of the time. Especially if you land anyway.

You can use aerobraking to capture in planet orbit, which will save up to 700m/s on Duna.

It really, really, depends on your craft. Heatshield is a tonne or two, and it does not care much about size of your craft. On small craft it might weight more than its equal in fuel+engine. On bigger ones it will be hardly noticeable while required fuel keep its proportions to cargo.

If your craft is solid enough to survive in atmosphere, or simply will be landing anyway, aerobraking is perfect choice.

Example for Yes: This horrible lander I quickly glued together will benefit greatly from aerobraking. It have lots of fuel, but aerobraking will increase it by ~18%. 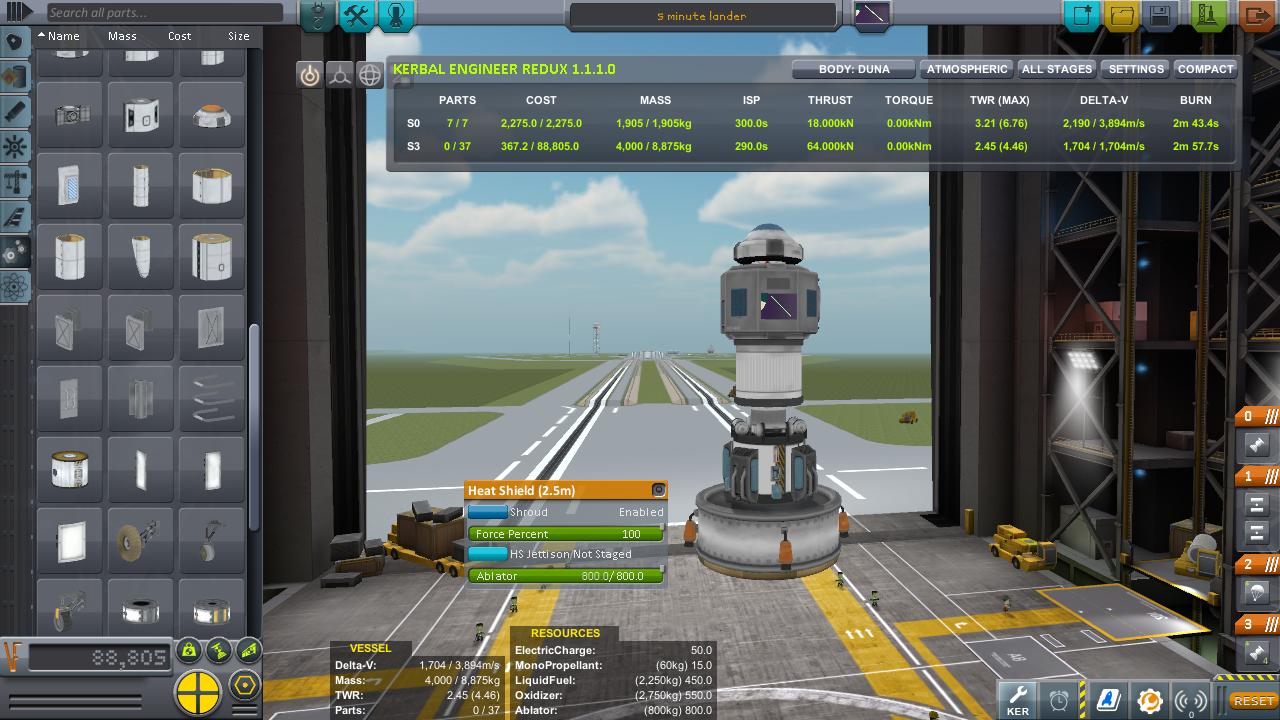 Hint: you can decrease amount of Ablator in heat shield to greatly reduce its mass (1 unit of Ablator is 1kg). Even empty heatshield will work great due to its high heat tolerance. It will still protect fragile parts from wind and heat (until it explodes). In case you are curious: at crazy speeds heatshield can overheat if ablator won't cool it down quick enough.

Of course there are notable exceptions. Fragile, tiny, Ion probes can pack 10k Delta V and still be below 10 tonnes. Big nuclear interplanetary vessel can pack 10k dV as well and still not collapse into black hole. Anything with ISRU can just mine more fuel when needed. In such cases aerobraking will needlessly complicate thing and introduce new dangers for no good reason.

Example for No: This probe can go anywhere without any aerobraking, so why bother? 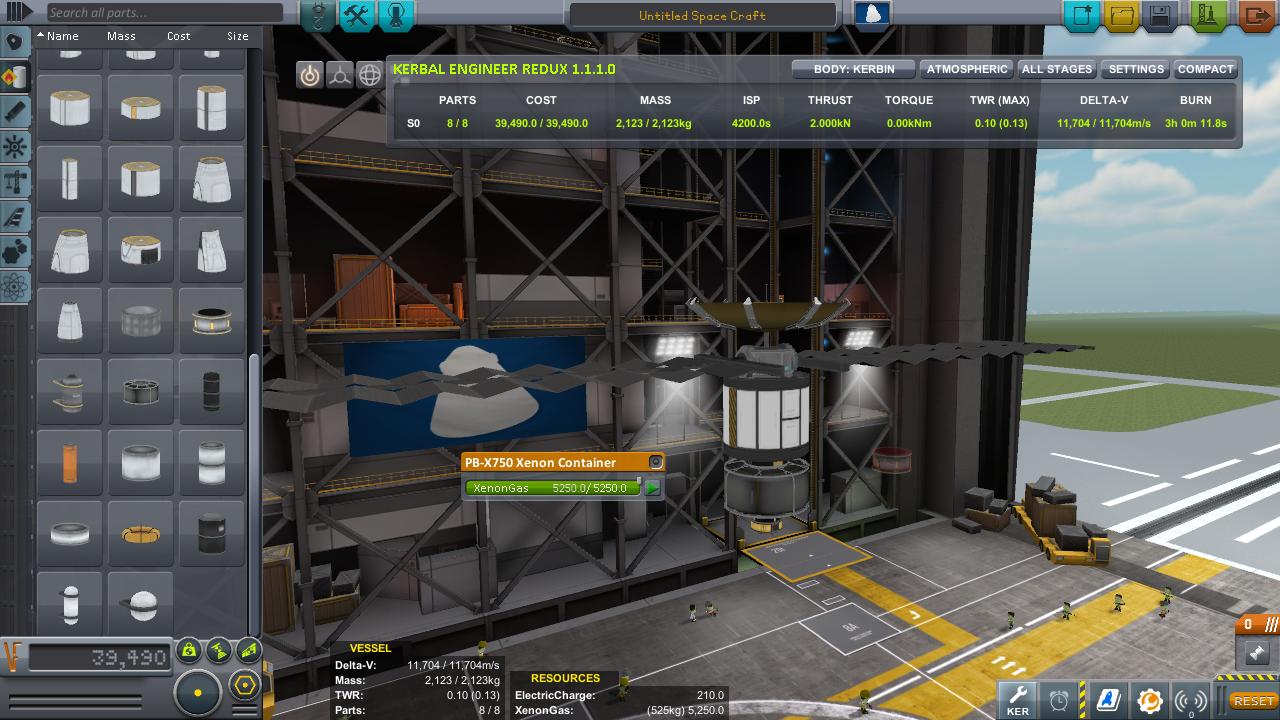 Aerobraking is free Delta V. But how free it really is?

It takes roughly 700ms to circularize in low Duna orbit from fuel efficient transfer. How much is 700ms? Time to do Science! (If you want to do Math, then you need fuel mass, ISP and DeltaV formula)

Ion is ~4 tonnes, ~90k credits, ~18k Xenon and will take many hours. It won't work because you need to burn as fast as you can to avoid wasting fuel. You will need more thrust (more mass in engines) and fuel (mass again...). And I haven't even added solar panels yet ;) 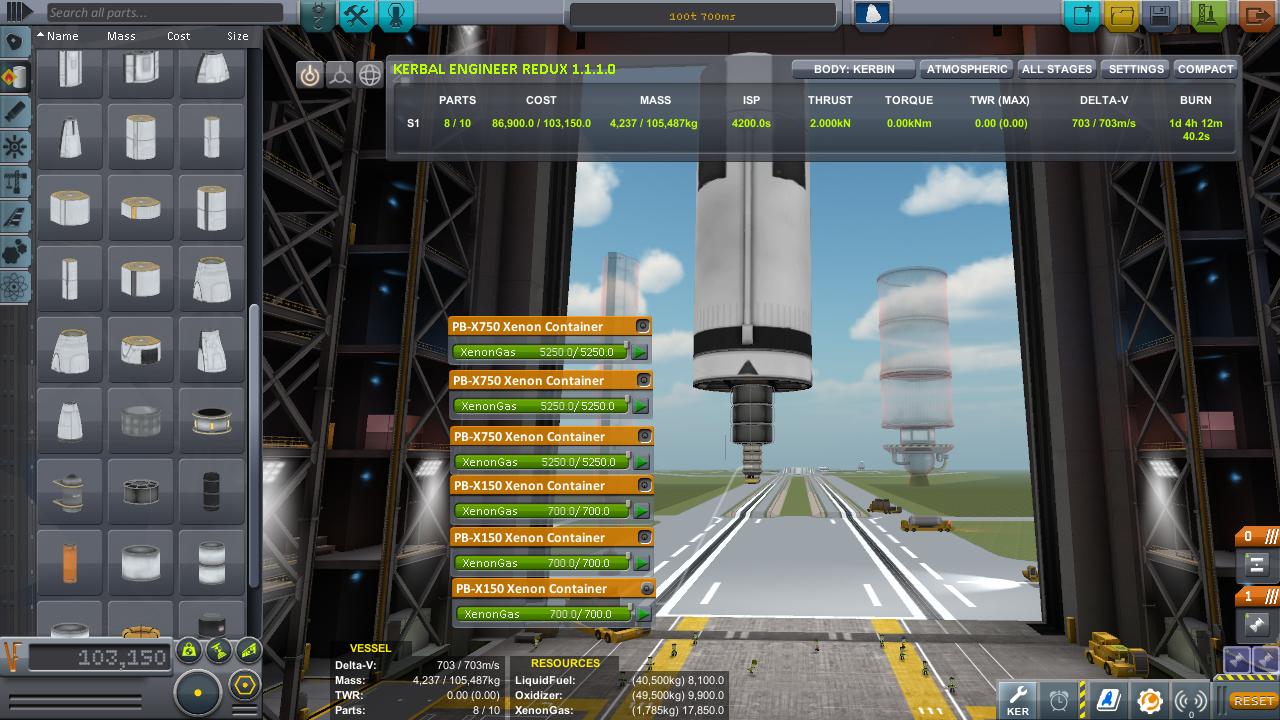 Lets go nuclear! 14k credits, 15 tonnes. 20 minutes. Still too long for burn in low PE. And I haven'y even added radiators yet ;) 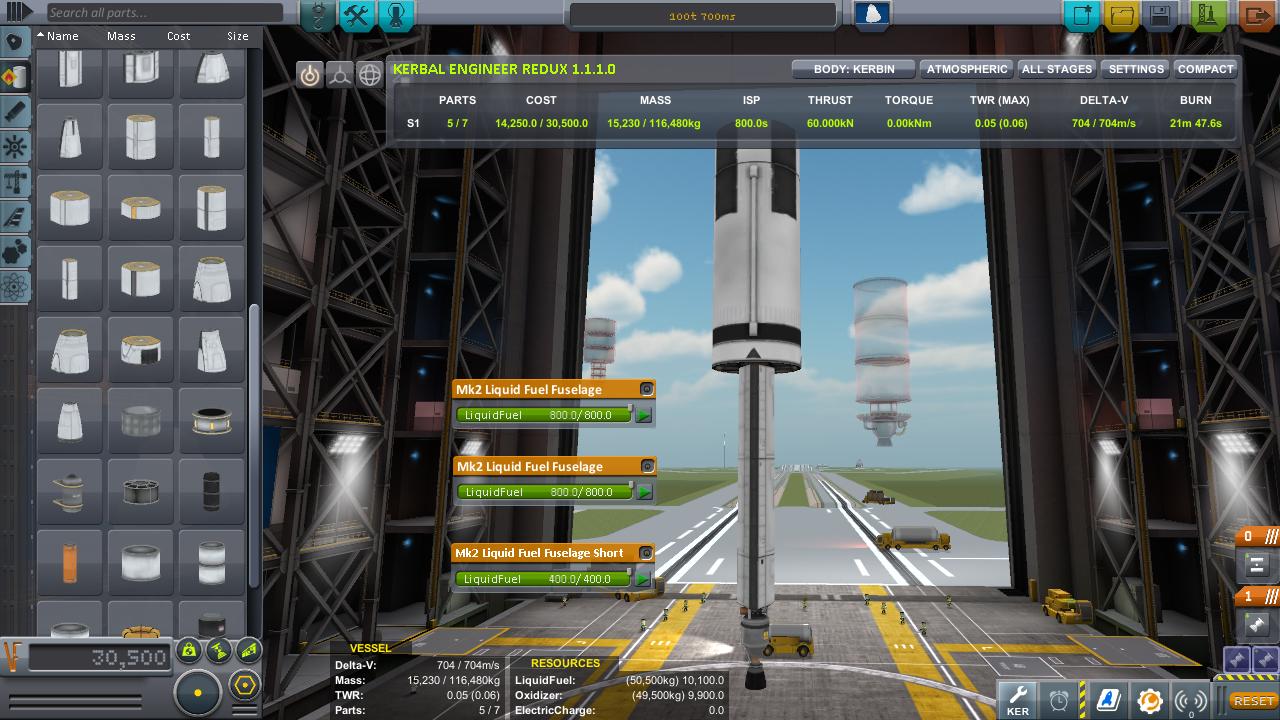 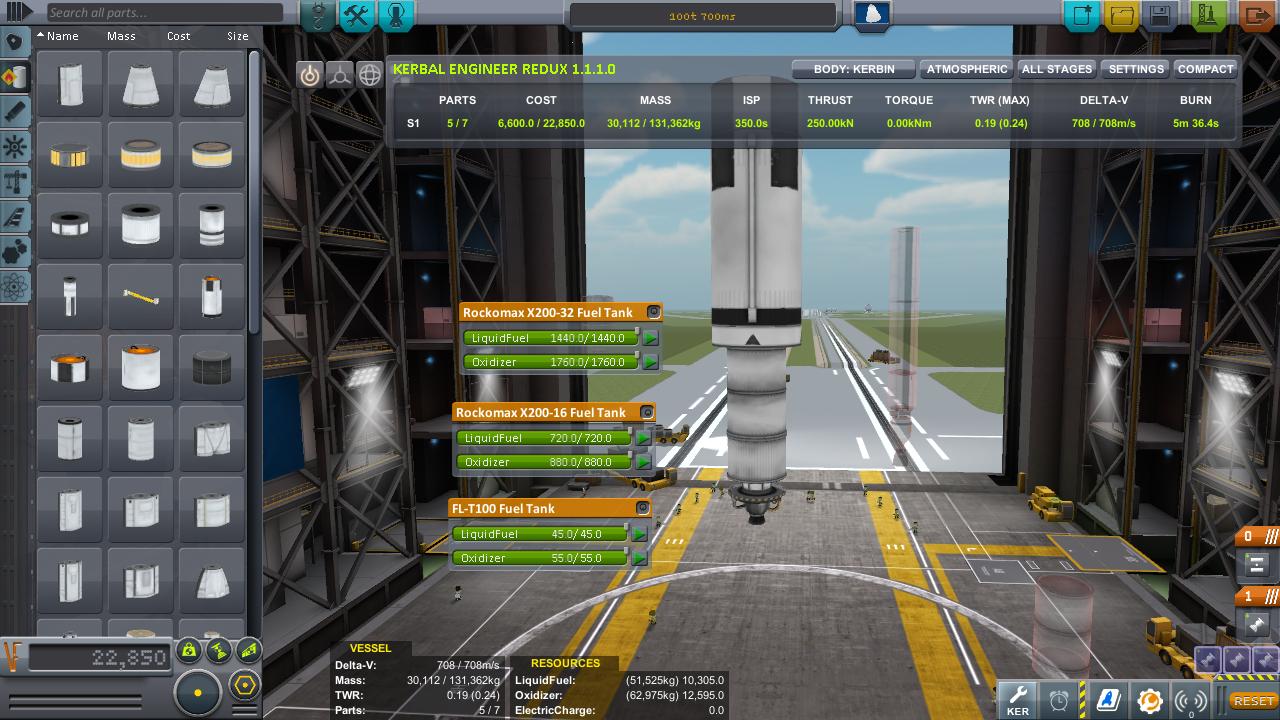 And when you want to make that burn short enough, you end up with a joke. It would be better to circularize on Duna with same engine block used to circularize on Kerbin and transfer to Duna, otherwise such big engine will be dead mass. 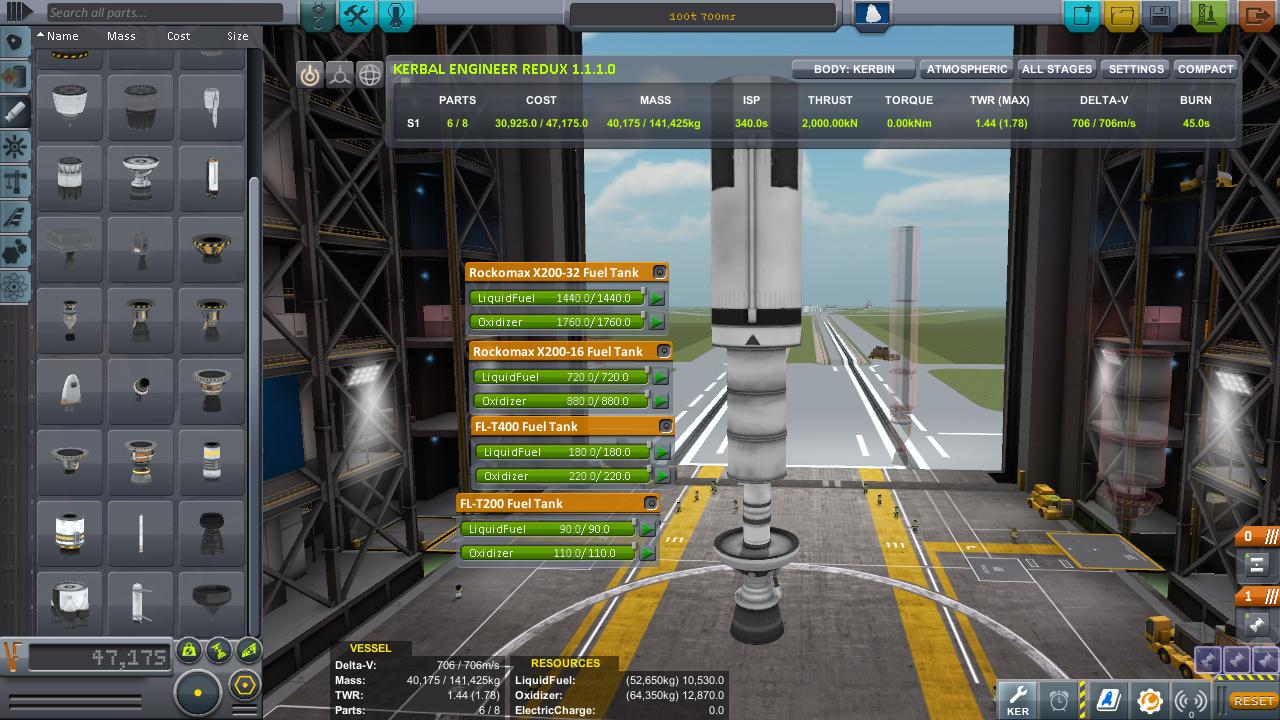 And now aerobraking with tiny circularization (because you need to lift PE from atmosphere to stay in orbit). ~9 tonnes without min-maxing. 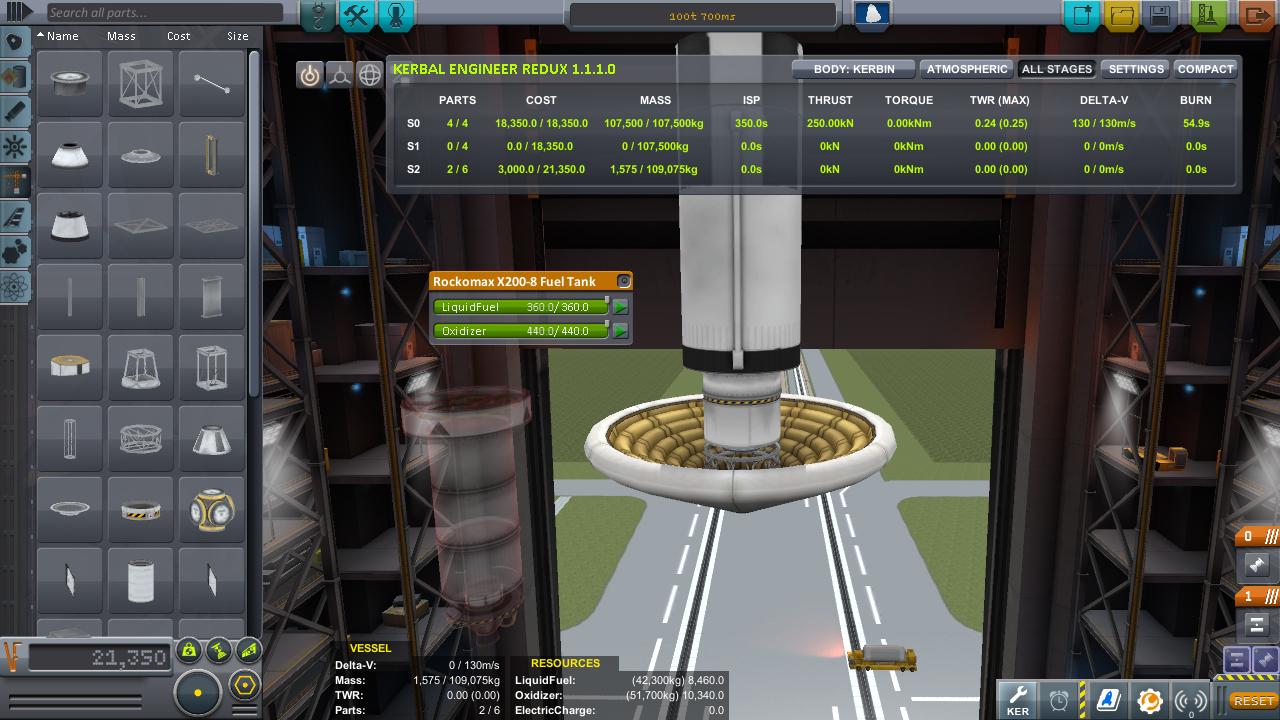 If we ignore issue of dead mass (engines, solars etc) propulsion to payload ratio will be roughly same for different cargo mass.

Of course in "real" world mass penalty will be higher (more engines, more structural parts and so on).

This means that aerobraking saves you somewhere between 5% to 50% of vessel mass. And the bigger your vessel, the higher penalty you will need to choose.

So how free it is? Ask Tyrannical Rocket Equation, or just look at images here. After all you need to get that thing into Kerbin orbit and then transfer it to Duna!

Note: You can split capture burn to increase fuel efficiency (ideal burn is instantaneous, fuel is wasted as time goes up). And aerobraking into multiple passes to increase survivability. Just make sure to burn/brake hard enough to stay in duna sphere of influence (SoI) which requires roughly 300m/s delta-V from low PE.

Example: Two burns, 300m/s to stay in SoI, then 350m/s to circularize. Every additional burn can be longer because with dropping speed at PE you will stay longer near it. 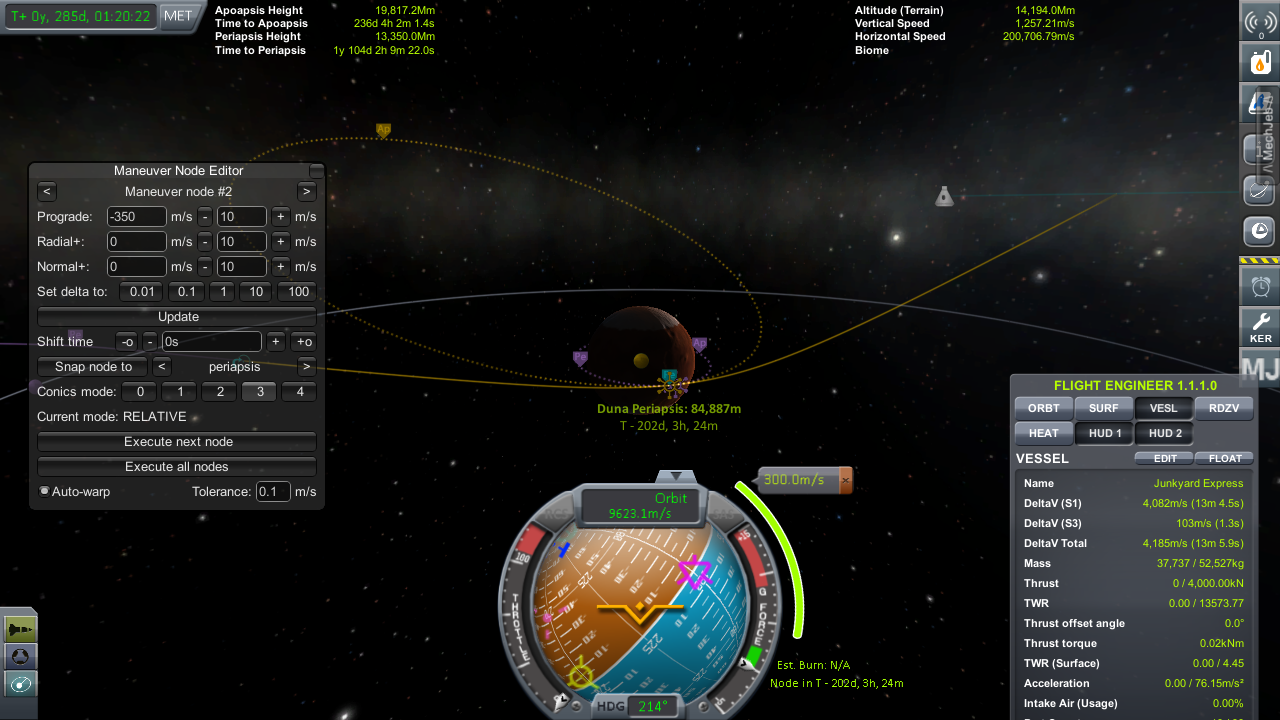 [Work in progress] How to include aerobraking in mission planning?

That's the real question you asked. Mission planning is rather complex. And it really, really, depends on your mission. I will do aerobraking where it makes some sense, and skip it where it makes none, hopefully displaying both pros and cons in simple form. I will also throw in bunch of crafts unrelated to aerocapture simply because I am having too much fun to limit myself, it will take two or three days to finish :)

By the time this expedition ends we should have examples of quite a lot of practical Duna approaches. I hope your project will benefit form it.

I will be doing it in many launches, building a fleet, to avoid game slow down and ugly rockets. All launches and maneuvers will be efficiently done by MechJeb, because after few hundred times such thing gets boring and I have Netflix on second screen ;) Transfer to Duna will be lowest Delta-V Hohmann style. I believe your mission planner will suggest to do it similarly.

All crafts should be easy to use, with huge error margin, and not limited to Duna, as I would like all players to be able to use them. It will be done in Sandbox so no tech level constrains will be applied.

Two LittleBrother's for Ike and Duna polar orbits. Hopefully I will do some cool gravity assists with them. I used small Cubic Strut to build quad-Dawn module. As it is Ion craft, I used spare fuel to get to 25km orbit, reducing escape burn from ~1100m/s to ~600m/s. 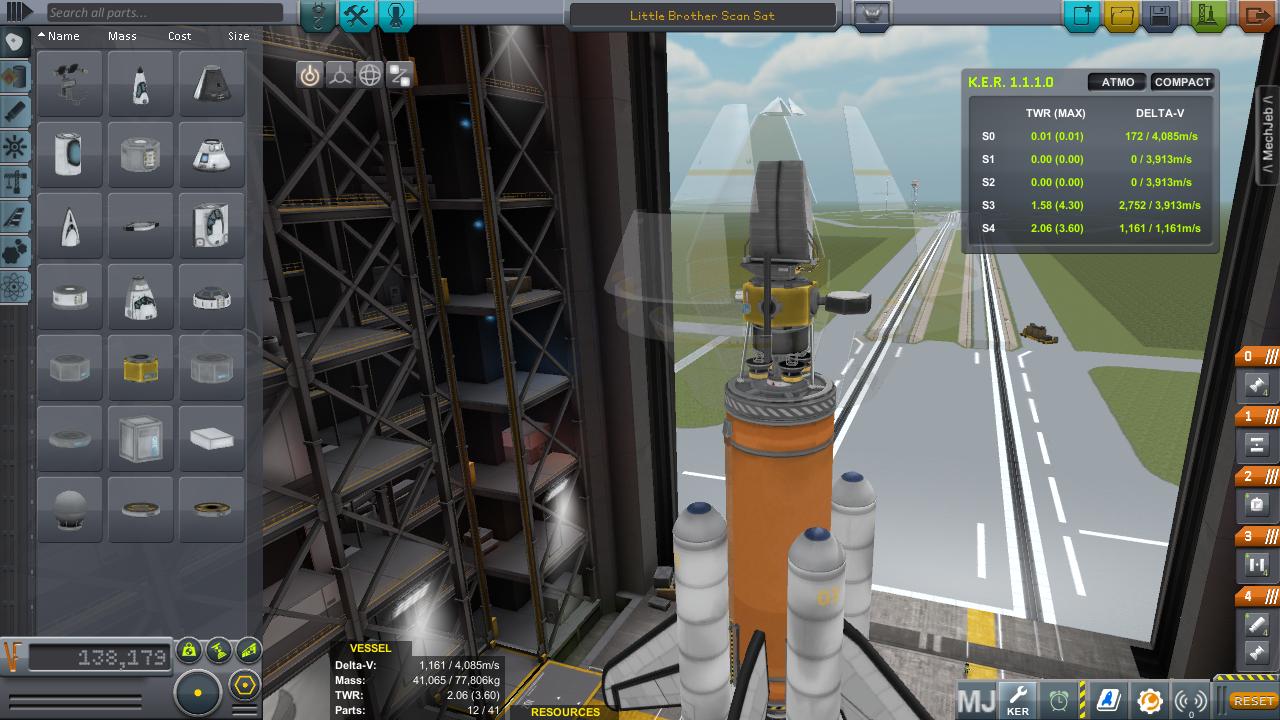 GentleImpactor's will land on various spots on Duna, I think four would be good number. Two will go for poles after bouncing around Ike, remaining two will land directly on Duna. Nothing special, just bunch of science parts. They will perform aerocapture and then land. 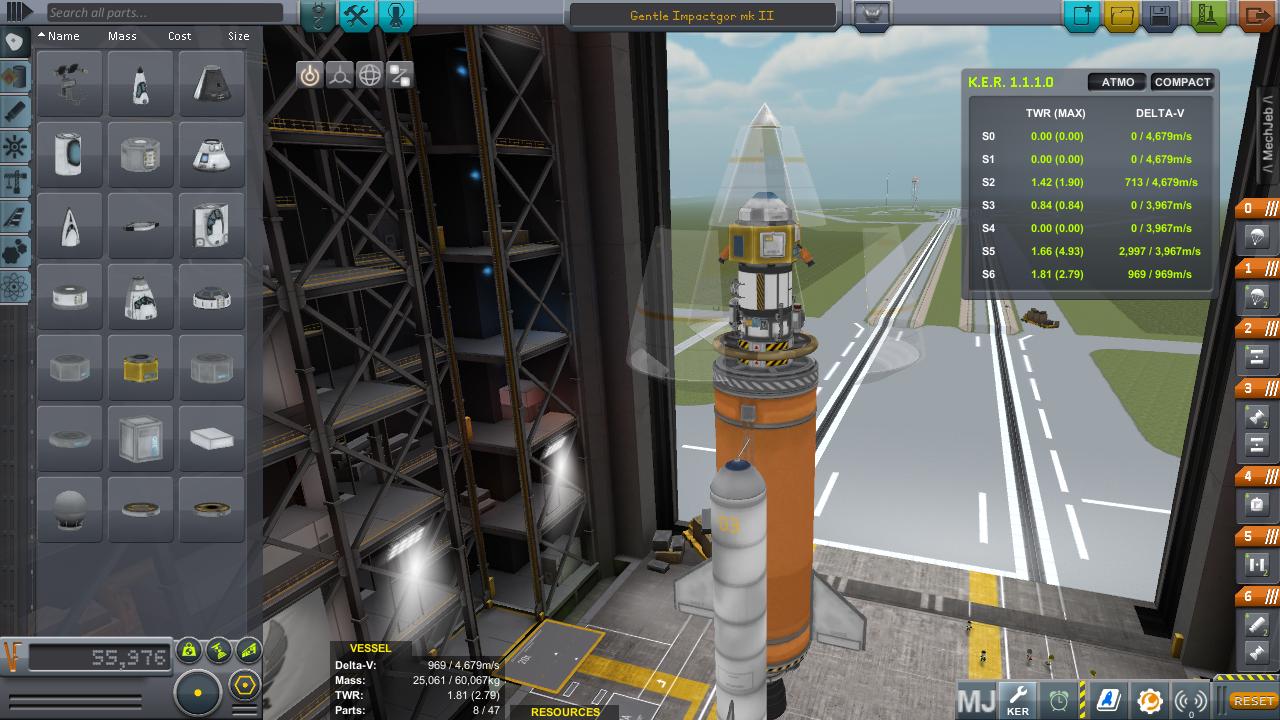 Crew transfers will be done with two SpaceBoat's. It should be able to land on Ik and, I hope, reach orbit again as well. They are also equipped with emergency planetary landing system. 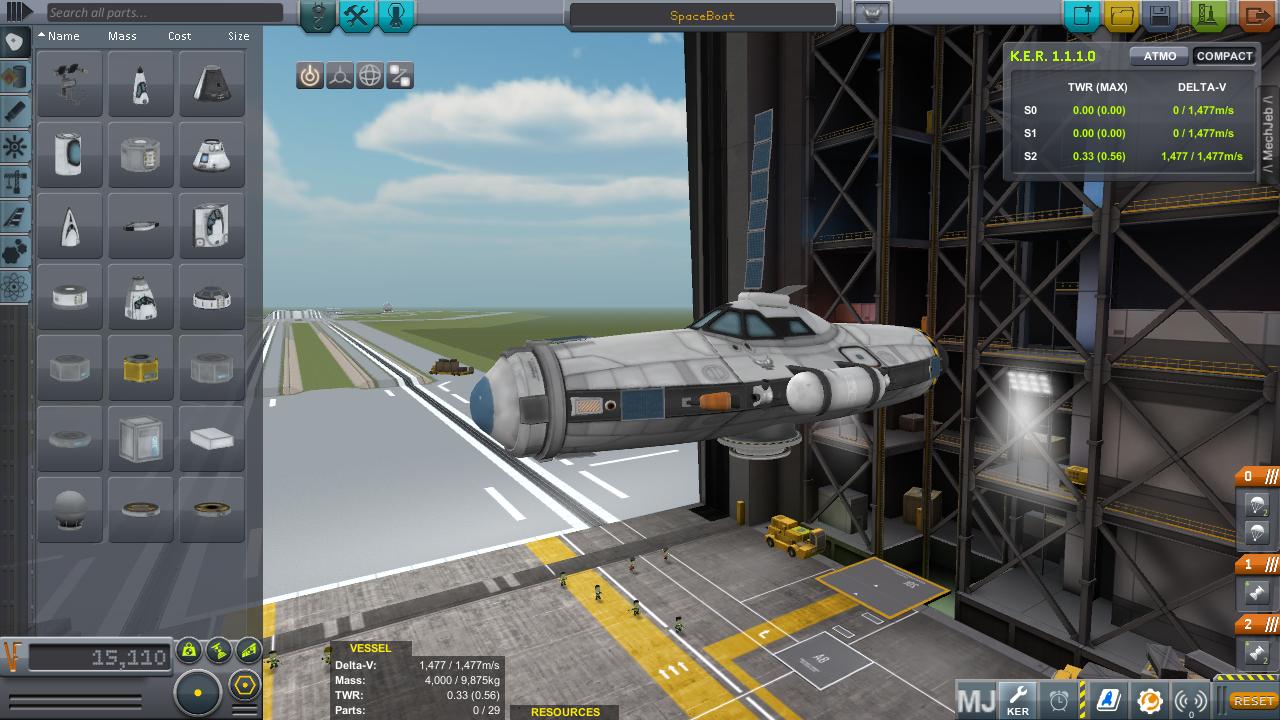 And Kerberus itself! It will carry all crew, and serve as fuel storage. Almost a thousand tons of explodium! You should be able to notice two SpaceBoat's docked at its flanks. At its top you can see return module. It flew better than expected. I plan to capture it with nuclear burn in high orbit, so it will be close to both Ike and Duna (Boats have short range). 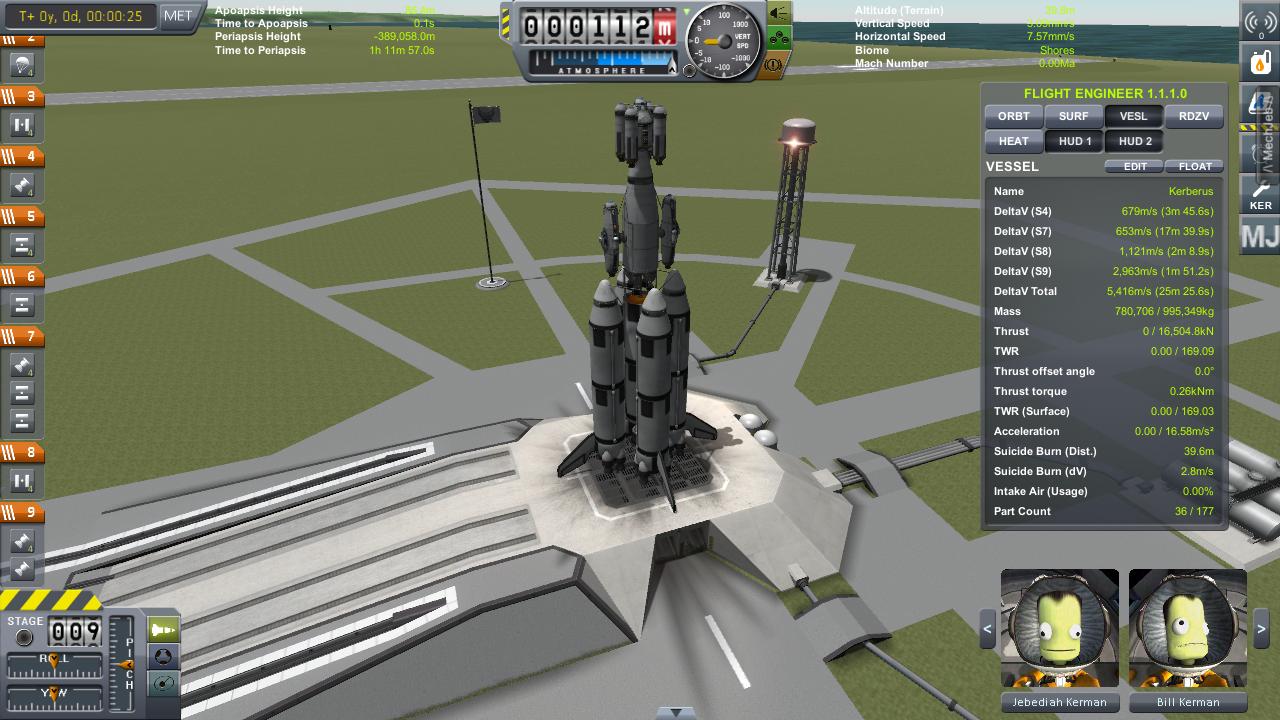 Of course proper mission requires laboratory to maximize Science. Sadly some parasite drone attached itself to last empty side of lab ;) 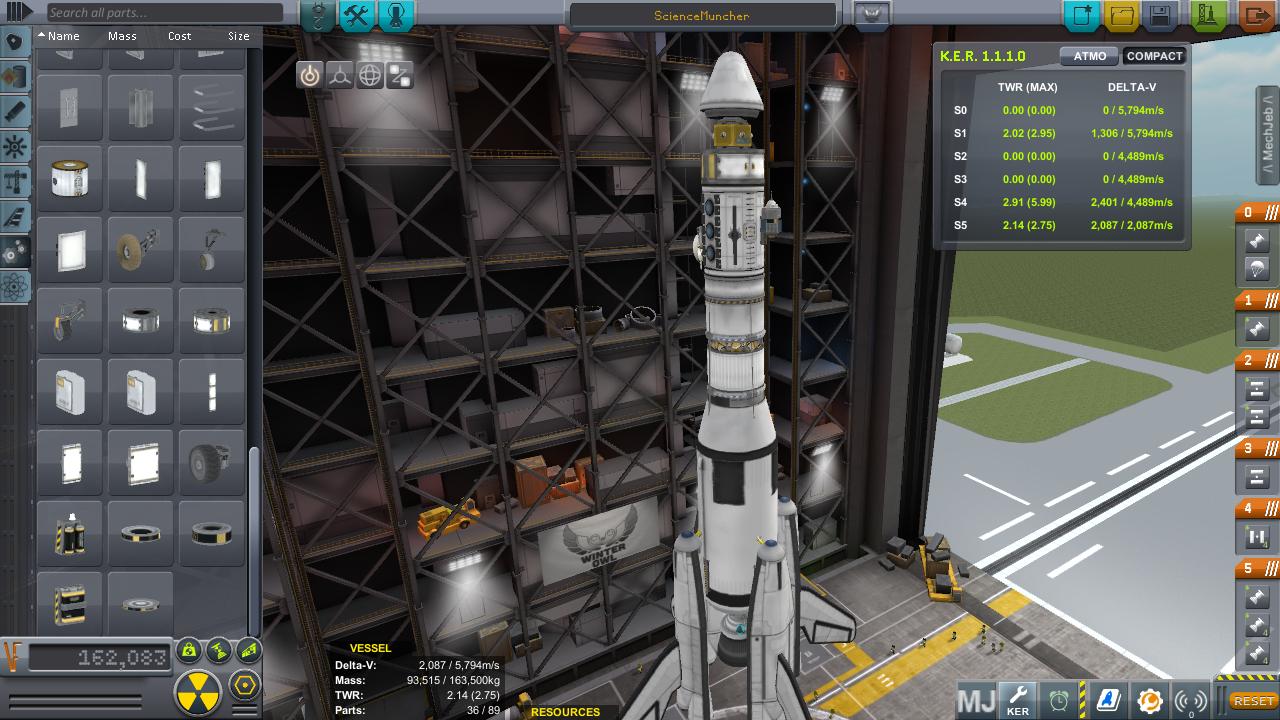 I am still assembling the fleet, there is need for miner/refinery with support crafts and crewed Ike/Duna landers. I would also like to drop some rovers and deliver a plane or spaceplane, maybe ion, to fly around Duna. If anyone have an idea what also to send (stock only), feel free to comment, expedition will take a lot of time so I will start it this friday.

6
Does deltaV have a limit using only stock parts?
7
Do you need a heat shield to land on Duna?

13
How can I calculate the right number/types of parachutes for my craft?
4
When should I perform the inclination matching maneuver?
3
Do I need more than 1 Antenna / Comms / Communotron?
5
What's more fuel efficient, orbit or slingshot?
4
When visiting an extraterrestrial moon, is it typically most efficient to fly straight into the moon's orbit then do a capture burn?
6
How to control a rocket?