Are eggs sorted in specific order and what determines it?

So I have a lot of eggs and I found out that they are stored in some strange order. 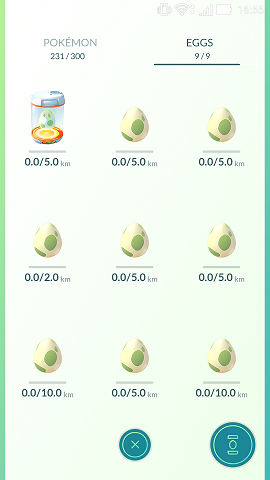 On this picture, I just got 2km egg from Pokestop. You can see that it is 4th in order.

My concern is, what determines in which order they are seen there?

Obvious thing is that the ones in incubator are always first, but then the rest is sorted by some hidden value, because it is obvious, that they are not sorted by distance needed nor time of acquisition.

According to some rumours, there MIGHT be the thing that eggs are predetermined by time you get them. So...

Is it possible that those are ordered by

I know that I will need to hatch them all eventually, but if we can know what ones can yield better pokémons, we can hatch in some order that eventually can benefit to get the better pokémons after all (or faster). If the order is determined by the level when I got them, then hatching first the eggs with lower level can clear my inventory to get better eggs and similar.

I also found the table included here that shows which pokémon can be hatched from which egg and there are some overlaps (higher pokémon ID from lower egg), so that table is not against the possibility of order-by pokémon ID, preserving the possibility of misorder (by distance) in inventory.

To add, I have another screenshot, since the first one, I already hatched the in-progress 5km one, then did 2km egg, then I started to hatch one 5km egg (I think) from first line. You can see that I got another 5km egg that is sitting between 10km eggs. 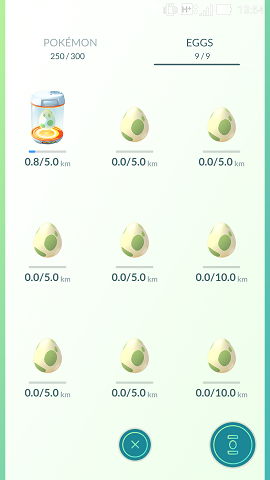 I know that there might be no exact answer, because we probably cannot access the code, but there are communities that do incredible research and if there is possibility to get the answer for this, it can benefit a lot of players to hatch on demand. (For example the latter stored 2km egg, the higher chance for Magicarp, if stored by ID etc.)

As far as I have experienced the only order of eggs is whether or not they're currently incubated (and their chronological order), since they're on top of the list. The rest is most likely random.
The (non-incubating egg's) order might even change when you pick another egg to incubate or get one to fill an open slot. This leaves only two possibilities:

68
How does egg hatching distance relate to the hatched Pokémon?
31
Are eggs predetermined before you hatch them?

13
Pokémon GO Egg Hatching Distances
68
How does egg hatching distance relate to the hatched Pokémon?
27
How many candies do you get for every 2k, 5k, and 10k egg?
8
Which will provide more Stardust: one 10KM egg or five 2KM eggs?
22
Are there Pokémon that can only be hatched from eggs?
31
Are eggs predetermined before you hatch them?
2
Are hatched Pokemon affected by the Halloween special spawn rates?
22
Are Generation 1 Pokémon still able to hatch from eggs if they have a Generation 2 preevolution?
8
Do eggs acquired at a nest increase chance of hatching that specific Pokémon?