I have 2 Dragonites, one with more Combat Points than the other one with more Individual Values. I used pogobag.com to get the values: 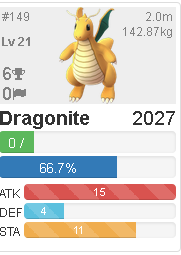 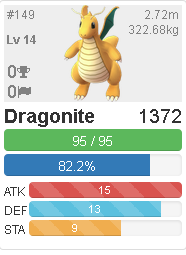 As you can see, the first one have bigger combat points and the other one have bigger individual values. I want to Power Up and keep only 1. Which would be the ideal one to keep?

PS: Don't mind the green one, it's their current hp

It highly depends on your playstyle, but I tried to generalize as much as possible; Reference is having played many years of Pokémon myself.

Say you want to have the best chances in lategame, whereas lategame I refer to when everbody is lvl 30+ and eventually battles between players is implemented, you should go with the one on the right (higher iv) as until then you should probably have it maxed out in terms of cp.

If you're just happy to have a strong dragonite and you don't care too much about being the best/ part of the betters, you can go with the one on the left as it certainly is also a strong pokemon.

Long terms short: Some people still don't have a dragonite so at the moment you're still at a very good position, but in say a month more people will have a dragonite and eventually the individual values iv will start to matter more.

0
Should I evolve now or wait for a higher I.V. percentage?

5
Pokemon moveset effectiveness
1
Do Pokémon all have different max stats?
5
What is a pokemon's “Level” and its purpose?
4
How do IVs affect a Pokemon's combat in Pokemon Go?
11
In Pokemon Go, is it better to have small defects for Attack, Defense, Stamina, or one big defect and perfect in other areas?
4
Do individual values (IVs) really matter at lower levels?
10
How does Ditto's transform work against a raid boss?
2
Is there an established single-letter abbreviation for Pokemon energy types?
2
How does the lucky attribute affect IVs during trading?