What happens if you try to catch a pokemon when you are at your pokemon inventory limit?

In Pokemon Go there is a limit to how many Pokemon you can have in your 'inventory' at once. This limit can be increased by buying Pokemon storage upgrades with Poke-coins etc., but the default is 250.

What happens when you try to catch another Pokemon when you are at the current limit?

With the new update, whenever your Pokémon inventory is full (i.e. you have 250 Pokémon with you), and you tap on another Pokémon in the wild to enter into the battle arena to capture, it won't enter into battle. Instead, a popup saying "Your Pokémon Box is full. You can buy more space in the shop." will appear followed by an affirmation selection choice saying OK and a secondary choice saying Go To Upgrades.

So, the exact answer to this question is - NO. You won't be able to catch any Pokémon since it escapes the battle arena by showing a popup alert.

About the situation where the Eggs might hatch after you've reached your inventory; I assume that the egg won't hatch unless you've some free space in your bag to carry the Pokémon.

Similar to when you run out of Pokeballs, the game will alert you that you cannot catch any more Pokemon because you have hit the limit to the number of Pokemon you can have. I hit this limit once but forgot to take a screenshot. I will see if I can hit the limit once more and provide one for you.

Based on the other answer by Paras Shah I must have hit the limit with an earlier version of the game.

I finally hit the limit in version 0.33.0, here's a high res screenshot of the alert (click the image for the full resolution): 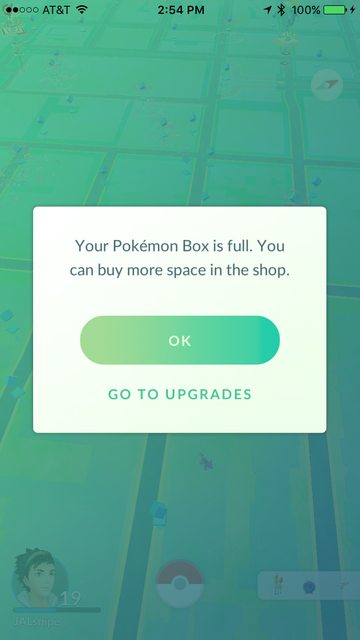 7
Whats happening if your pokemon bag is full and egg hatches?

60
What are the possible catch bonuses and how much experience do they reward?
20
How many unique Pokemon are there in Pokemon GO?
41
What are the maximum bag space and Pokemon storage? How many upgrades are needed to reach the limits?
5
At what range will a pokemon show up?
9
Is there a way to see how many coins you have of your daily limit?
13
Daily limit on how many gifts you can collect from pokestops?
15
What happens to a Pokemon when traded from Pokemon Go to Pokemon: Let's Go?
4
How to change the Google Play account in Pokemon Go to use the balance?