Why Nayru apears in the file selection screen?

I just finished Oracle of Ages on a GameBoy Color emulator. Going back to the menu, I noticed that Nayru now appears in the file selection screen next to Link. 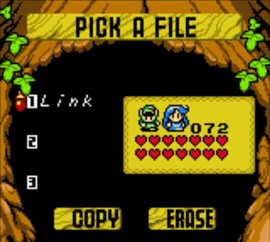 What does it mean? Is Nayru now playable or is it just because I finished the game?

The Oracle of Ages (OoA) and Oracle of Seasons (OoS) games are special. Both of them feature a world where Link has to save the respective oracle (Din in OoA, Nayru in OoS). And compared to most other games of the Franchise, the game isn't over when you saved the oracle.

Instead, you will unlock the third oracle, Farore, the oracle of secrets, which allows you to use secret codes found in the other game (OoS) in yours (OoA) and vice versa (as long as the games are linked, IIRC). This will unlock the actual final boss, after both candles of destruction* are lit.

So Nayru/Din on your game is just an indicator that you've saved the oracle and are now ready to start over in the other game and/or get ready for the final encounter. Also note that Nayru now sings in the town again.**

* that's the literal translation of the German term, I don't know the English one
** I'd like to add a screenshot, but I've only played both games on cartridge

Just because you finished the game (and can use the code feature to start a linked game in Oracle of Season).

Not the answer you're looking for? Browse other questions tagged zelda-oracle-of-ages or ask your own question.

8
How are passwords determined in the Legend of Zelda Oracle games?
6
Is it possible to complete Moonlit Grotto without using the teleporter in the midboss room?
7
How do I link my games in the 3DS releases of the Oracles games?
4
Do Oracles of Ages & Seasons play in Game Boy Color mode or Game Boy Advance mode on the 3DS?
3
How do I transfer my secrets between the original Legend of Zelda: Oracles of Ages and Seasons and the 3DS versions?
2
How Do I get back to the shooting gallery on the rolling ridge?
1
Do the stone soldiers move in a predicable pattern?
1
How to explore the Sea of Storms in the Present Age?