Lower CP but higher damage? (My confusion over attack damage ) 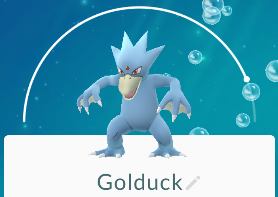 Compat Power 1432 : (this one was from powering up then evolved Pysduck)

My question is which one will produce more damage to opponent in fighting? To be honest till level 16 I had never realized all of these values since I though Compat Power will mean everything.

From this website, looking up the entry about Golduck, you'll find the following values:

So, by looking at your first Golduck with the move Water Gun 6, and seeing that it deals 12 damage per second, this tells you, that you can use Water Gun two times per second. Confusion on the other hand deals 15 damage but has "only" 9.93 DPS, so therefore it takes 9.93dps/15d = 0.662 seconds. Therefore, Water Gun is faster, and also deals more DPS.

That's the way to calculate how fast a move is, and now that you know it, you should be fine.

Nevertheless I suggest you to keep both, as it depends highly upon your situation whether you want to have a Hydropump or an Icebeam. Icebeam is especially useful against Dragonite.

It's important to know the difference between attacks.

As you may have noticed, Pokemon Go supports real time battles, as in the previous Pokemon Games, the battles were round based (so one attack per round). The initial Speed attribute of Pokemons was used to determine who gets to attack first. In Pokemon Go this is missing.

The main difference to Pokemon Go is, that in Pokemon Go attacks also have a certain amount of time that they consume. So i.e. the attack scratch was usually 40 dmg and 100 accuracy in the first gen, a not-very-useful attack. In Pokemon Go, Scratch does have a very good 12dps (damage per second). --> The usus is to take the dmg an attack has and also the time it uses.

So don't get confused over the bare valuet that's written at the end of the attack, important is its dps.

For a complete list, you may want to checkout this website which contains a list of all Pokemons, which moves they can learn and how much dps each move deales.

TL;DR In Pokemon Go efficiency of attacks are calculated as dps (damage per second). The faster an attack is, the more often you can spam it and therefore attack and it's speed matter.

26
Should I prioritize CP or moves?
9
Will Pokemon Go work with my rural location?
8
Unresponsive screen, except for when in power saving mode?
7
Pokemon basic moves: Higher damage strictly better?
3
What is better to have? A pokemon with higher IV but lower CP or vice versa?
3
Do nearby raids only show silhouettes?
5
Pokemon not showing up or spawning
3
How to achieve a 2 way ensured lucky trade where 1 of the traders has already 9 luckys obtained through trading?
18
Why would a Pokémon's silhouette appear on the nearby list, despite already owning it?