Can I build a player activated fill clock in Minecraft?

Is there a way to keep a fill clock deactivated, then have a player start it with say, a pressure plate or trip wire? It would be like a toggled off redstone clock, but with command blocks.

What you are trying to accomplish requires 5 steps (in my solution):

First, the input. The input in your case is a tripwire. This activates the toggle, and makes everything happen.

The input leads to a mono-stable circut. This converts the redstone signal the tripwire outputs into a one tick pulse, which is critical to the next step.

The T-Flip flop changes the one tick pulse into a constant redstone signal, much like a lever outputs a constant signal as long as it is pulled. The T-flip flop is merely a sticky piston which pushes a blocks in one of 2 positions, depending on which state it is currently in. Like the name suggests, it flips between the 2 positions every time it gets an input.

The selector takes the block position from the T-Flip flop, and converts it into something useful. In this case, toggling between an on fill clock and an off fill clock. There are 3 command blocks, one for an off state, and two for the on state. The off state works by placing a redstone block on one of the fill clock command blocks, therefore locking the position of the clock, ergo turning it off.

It then turns it on by removing that redstone block /setblock ~-1 ~1 ~-1 air(this is the top command block), and placing another one on the fill clock, which turns it back on /setblock ~1 ~1 ~-2 minecraft:redstone_block.

Below is a diagram of everything. 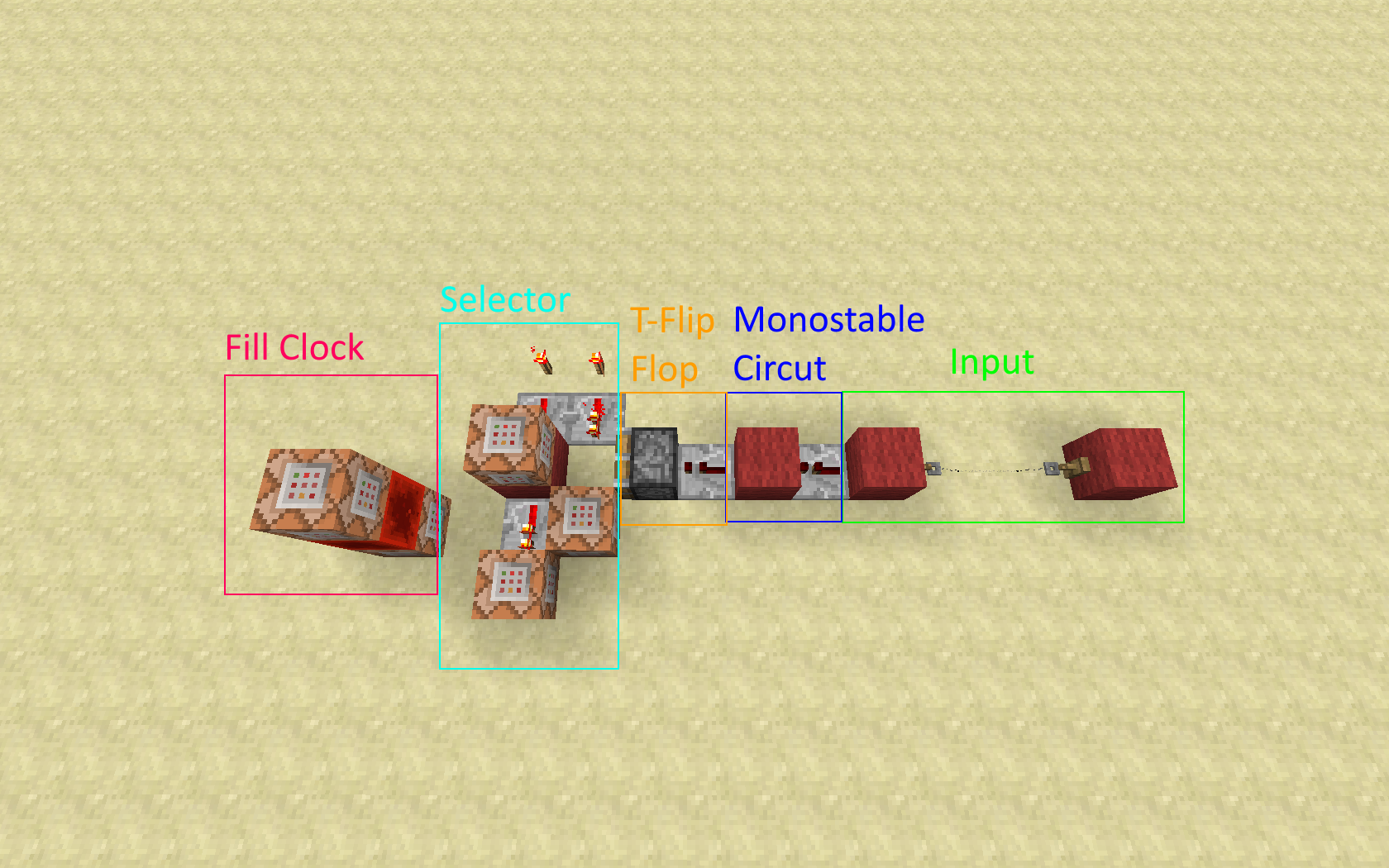 The selector in more detail

The selector uses the T-Flip flops' constant output and 2 state mechanic. When the T-Flip flop gets a one tick pulse (created by the M-S circut), it activates a sticky piston, which pushes a block out. Because it is one tick, the block doesn't get retracted back, and will only go back when it is activated again. This turns the trip wire into a lever, and 2 redstone torches make it so that both positions activate something: on and off. When the wool is touching the piston, it activates a command block which turns it off (explained above). In the other state it turns it on. The reason why there are 2 command blocks, is because one deletes the block placed by the off state and the other places a redstone block in the clock, activating it again. Take note that one of the command blocks has a delay (/setblock ~1 ~1 ~-2 minecraft:redstone_block) and this is so that it waits for the redstone block beside the clock the be deleted first, otherwise the mechanism wouldn't have worked.

18
How do I change track direction?
6
How can I receive a success output signal from command block on a fill clock?
3
Using a command block to prevent a button from being placed
1
Restrict where a player can build in vanilla Minecraft?
3
What player actions can be specifically tracked by command blocks?
0
Minecraft Redstone delay that only works if active for 5 seconds but turns off when not active
2
How can I set players to different teams?
3
How to build wall with Minecraft fill command and caret notation?