How to change a minecraft player's gamemode when they are in a specific area? [duplicate]

Ask Question
Asked 3 years, 7 months ago
Active 1 year, 10 months ago
Viewed 11k times
0
This question already has answers here:
Is there a way to set an “Adventure Mode Boundary” in Minecraft? (4 answers)
Closed 2 years ago.

I just made a minecraft server and was wondering if in the server it would be possible to change a player's gamemode when they visit someone else's building(s) (this excludes the owner of the building).

I used the /testfor command but I'm not sure how to select a specific land and change the game mode of the player on it.

Selectors (you should probably use @a for this) can have "Selector arguments". The ones you're interested in for selecting a specific area are:

Using a radius is the easiest method. If the build is at 20, 64, -10 for example, you could change your commands to:

Which sets the gamemode of anyone within 15 blocks of that point to creative.

With the cuboid selectors, your starting point should be the corner of the cuboid with the lowest coordinates on all axis (so lowest north-western).

dx, dy, dz should then be the positive width, height, and length of the cuboid, as such: 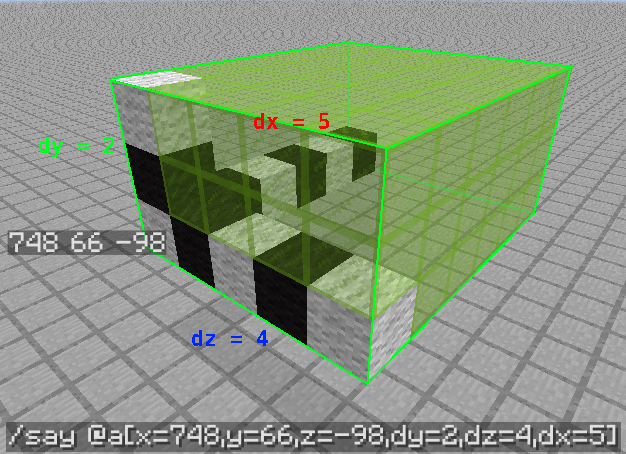 These are more complicated than a radius selector, which you might want to stick with, but will allow you a more accurate area if your build area is cuboid.

Two more selector arguments you should use for this, along with the area selection, are m and name.

This isn't as complex or as fine as the other most popular answer, but I hope it will do.

You can place a powered repeating command block underneath a person's home, and simply use

If you want to exclude a certain person or team, use @a[team=!xxx] or @a[name=!xxx], because an exclamation point before the selector means "not".

10
Is there a way to set an “Adventure Mode Boundary” in Minecraft?

6
Can I reset my progress when playing on a server I don't control?
4
Using /testfor in minecraft to check if a player has a certain item in their inventory
1
Place items in specific slots?
0
Chain Command Blocks Not Equipping Armor?
2
How to get a random player's head?