What is going on here? An inmate beatdown?

I have a Protective Custody (PC) dormitory for snitches and ex-cops, and I have one that is "Extremely Volatile". I didn't get the usual flash of a guard icon when there is a fight, and there's no sound bit for this fight, but it looks like the guards are beating the hell out of the inmate. The mouseover says the inmate is "Spoiling", but I have no idea what that means. A reddit post showed something similar but didn't provide any answers. Also, the PA wiki doesn't show anything for "Spoiling" in the Status Effects section.

Any thoughts on what is going on here? 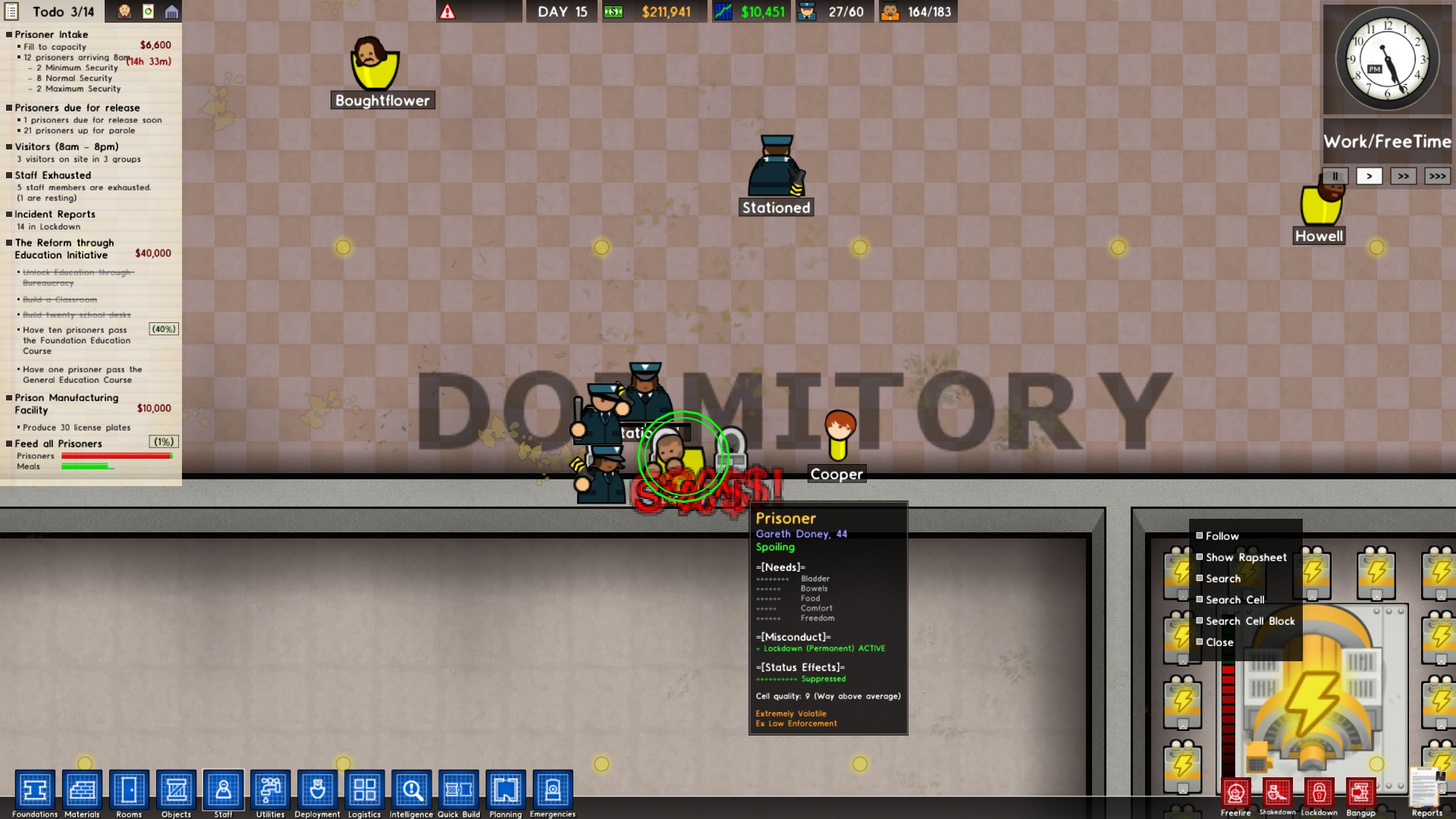 Update: Two in-game days later, this is still happening, the guards are really working this guy over. Man he can take a beating!

Update Two: On a hunch, I reclassified him as a Minimum Security inmate, and ended his permanent lockdown (How I keep the PC inmates in their dorm, has worked so far) and the guards tazed him immediately and then left. I reclassified him as PC/Permanent Lockdown and it seems fine. I have no idea what happened here though, still looking for answers.

Update Three: This seems to me to be a bug, as I originally thought and Sumurai8 thought as well. The issue was that he was constantly being violent, and permanent lockdown with other inmates didn't do any good either. I ended up taking care of the issue old-school: I removed his PC status, ended his permanent lockdown and assigned him to the max-sec wing. He immediately went into the common room to lift weights, where 3-4 other tough looking fellows were there. An inmate with a bandana followed him into the common room, and took care of the problem. He already had a life sentence, so what's another one? Issue resolved. I almost feel guilty about it. If only inmate Doney could have controlled that temper. #shawshank #gonnahaveanaccident.

I believe the "Spoiling" action takes place when the bladder need is filled up, and the prisoner can not reach a toilet in time. It's bladder will go down, as will it's hygiene. When a prisoner is in "fight mode" it will ignore any of its needs. It will only beat anything that comes in its path.

The Spoiling behaviour type is what happens when the privacy need it not met. The privacy need is not met because you locked people up in a dormitory. Consider building seperate cells for your protected custody inmates.

Your inmate should have been knocked out and put in cuffs when they started fighting, but it seems it was bugged. By manually taking control and changing how the prisoner was classified, you started a different traject where the prisoner is cuffed, and transported.

I recommend to use the permanent lockdown feature only for prisoners that are otherwise dangerous to the prison (e.g. gang leaders). Use the designated "protected custody" for ex-cops and snitches, so those prisoners can fulfil their needs.

7
What is the bare minimum for a functioning prison?
8
What is the purpose of a bin?
10
During a riot, what do prisoners have to reach to get guns?
6
What equipment do I need for the Alcoholism Program?
8
What is this dog sniffing out here?
8
Why can't I build a pipe here in Prison Architect?
4
Not able to designate a Dormitory as Protective Custody
4
Is it safe to put multiple snitches and ex-cops in a dormitory?
3
What is this icon next to the inmates name tag?