Can you beat the beefy enemies without relying on ranged attacks?

Even after playing castle crashers for quite a bit and leveling up some of my characters, I am still having problems with the beefy versions of enemies that you run across every now and then.

I'm talking about enemies like the one on the bottom right in the following image: 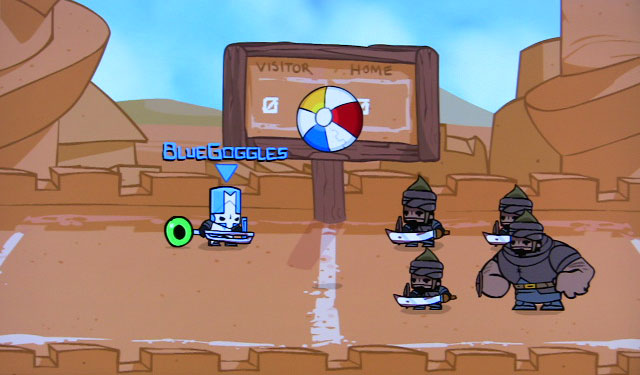 Seeing how they can take quite a beating, do not really seem to be stunned by melee attacks and can simply pick you up and throw you away, I spend most of my time running away from them and using my magic every now and then until they die. Not very heroic, and very difficult if there are many bad guys around to interfere.

So my question is, is there something I'm missing here, or must I rely on ranged attacks to take them down without getting pummeled?

The reason melee attacks are not effective against those beefy enemies is that it does not stun them like the normal size enemies, leaving you open for a counter attack. However, there is one spot that can stun those beefy dudes and that is the head. Running attack might help, but if you only manage to hit him in the head once, then you are within his attack range and will get thrown or punched. So, this is what I do against this type of enemies:

Get a little distance between, when the beefy enemy gets close, jump straight up, and try to hit him in the head. If you manage to hit him, he will get stunned. If his head is been hit 4 times in a row, he will fall down, giving you enough time to re position yourselves.

Couple things you need to watch out. If you missed him in the first two hit, there is a chance that he gets close enough to attack you, so time your jump and attack carefully. Practice more and you will get the hang of it. Also, another weakness about this tactic is that jumping straight up leave you open for range attack from other smaller enemies. Sometimes it's good to take those smaller enemies out first, or do this when you are clear. Hope it helps.

One tactic that I employ is to jump at the enemy after a running charge. The strong vertical attack will bounce you off them, and your speed will carry you to safety. Thus you can carry on the battle until the enemy is defeated. Since enemies of this type often can not be knocked into the air and juggled, this is the safest way to proceed. If you alternate the horizontal and vertical attacks, you will bounce on each strike and can stay in the air or even gain height as long as their is an enemy to hit. This can even be used to access the animal above the door in the animal house.

Not the answer you're looking for? Browse other questions tagged castle-crashers or ask your own question.

12
The pink comb tantalizes me! How can I get one?
5
How many XBox 360 controllers can you use on PC?