I'm am trying to build a mob farm in Minecraft SMP, but barely any mobs spawn near it. I know there is a limit of 85 hostile mobs for the whole world. But even when I am the only player logged on, I barely see any.

Is there any way that I can get information as to how many mobs are spawned, which types they are, or even where they are?

I am the server owner so I am able to install a mod if needed.

Due to there not being any plugin that currently does this, I have developed one.
It is called MobLocator and can be download here.

You don't need to use any mods – a lot of the information is already given to you simply by hitting F3 and reading all the confusing values.

The E value stands for Entities. My game is currently showing E: 7/68. This means that there are 68 total entities in the chunks currently loaded, and 7 are on-screen (if you could view through blocks). Now, the term "entity" refers to to dropped items (the kind you can pick up). It also refers to mobs. Because of this, if there are no stray items in the game, you can tell how many mobs are currently roaming around. You can also move your mouse around to see how the first value of E changes. If you hit an area where the value suddenly spikes, there's a good chance a cave is somewhere underground (that you could see if no blocks were obstructing your view).

A second use of F3 is that you can see where every mob in the game is. When F3 is pressed, each mob will have text hovering above its head, similar to a player name. The text is the entity number assigned to the mob, but that doesn't really matter. The nice thing is that you can see these text windows through blocks. If you see a clump of numbers, there's a good chance there is a dark cave (or possibly even a dungeon!) that you should explore, to make your mob trap more efficient.

However, F3 won't tell you which types of mobs have spawned (and I don't know of any Bukkit mods that allow you to do so). 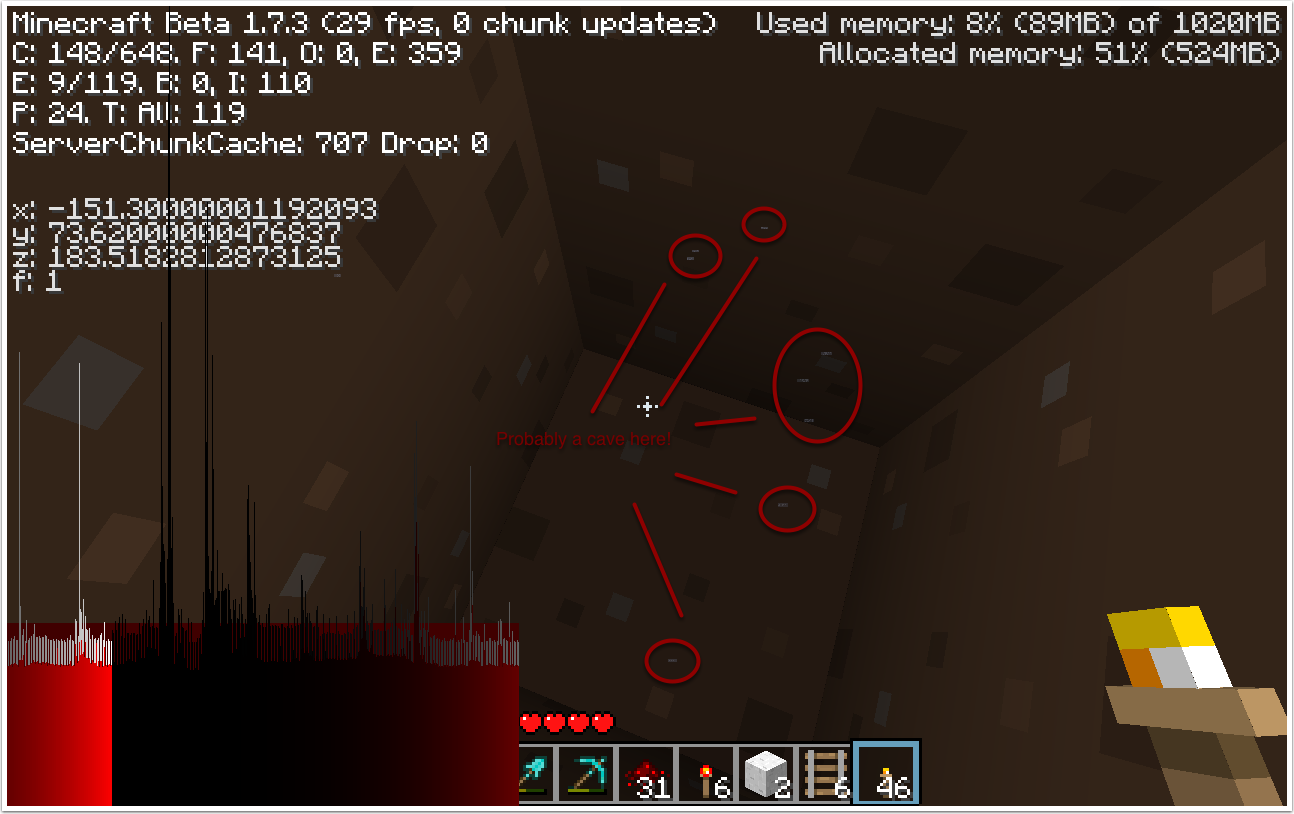 18
Keep some chunks loaded in Minecraft SMP
1
Do Enemies Ever Drop Beds?
5
Fastest way to clear out a large area down to bedrock?
5
Why isn't my Minecraft wither skeleton farm spawning any wither skeletons?
6
Has Minecraft mob spawning been changed to reduce effectiveness of vanilla mob farms?
1
Mob limit per chunk
2
Mob farming: 240-radius of air vs. 128-radius of lit caves
2
Minecraft 1.14.3: Why are hostile mobs not spawning?