How can I auto-balance two or more chests?

I have multiple chests which are in close proximity and all store large amounts of metal plates. I would like to distribute the load evenly between them, so that all chests always contain roughly the same amount of plates.

Preferably I would like to have some setup where when any chest has more plates than the others, those plates are moved to the chests with less plates. Alternatively I would also be satisfied with some setup which ensures that the chests are filled or emptied in order of fill-state. How can I do that?

Background: The chests are part of my train station. To optimize loading and unloading times I would like to avoid uneven distribution between chests or train cars.

I would prefer a solution which doesn't require any mods.

After some experimenting I found a setup which works quite well. It is based on an idea that only those chests will be filled which have below average item count: 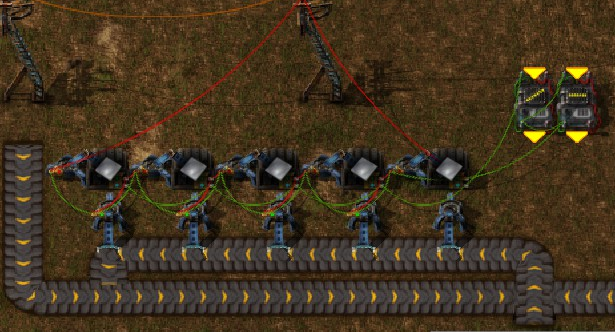 The result is that all metal plates which enter the system will be evenly distributed along the chests. When plates are manually removed from one of the chests, the inserters will rebalance by moving items from right to left to refill that chest. The last will move plates back into the ring which will then be picked up by the first chest. After a while the chests will be balanced again.

Also, the upper part of it is free (the electric poles and combinators could easily be placed further south) so a trainstop could be placed there to fill and empty the system. A method to empty the system without blocking train access would be an additional inserter right of the rightmost chest.

The only flaw in the design is that the first chest will always have slightly above average number of items. But considering that I built the design to handle large quantities of items I consider that acceptable.

This can easily be done using this mod which was actually designed for the same problem that I believe you are having with train unloading being unbalanced.

If you wish to do it without mods then something like this may be useful to you although it does have it's limitations. It uses combinators that ensure that the inserters only work if it's target chest has fewer items than the next chest. The problem with this is that it only works linearly so depending on your problem, you may need to adjust it or find a different solution.

10
How can I save an item to a hotkey?
10
How can I encourage alien expansions?
15
How many people can play multiplayer factorio together?
4
How can I build on top of lakes?
3
How do I block all but one item type from chests?
4
How to restrict the use of storage chests by distance?
8
How can I monitor circuit network signal values?
3
Is there a way I can stop Ammo from auto-stacking with what I have equipped when I craft it?
7
In Factorio, how much fluid can a pipe transfer?
3
What are my vulnerabilities in this wall defense?