I am working on building a Minmus orbiting base, where I would use ore from Minmus to make fuel, and basically make this my base of operations for any long range missions. I created a "space mover" ship that has a grabbing claw (because there are parts that aren't feasible to add docking ports in various locations). In this case, I sent up a vessel that has a mostly empty fuel tank with docking ports to be attached to the station, and along with it, a docking port with a large solar panel array. I can grab the array with the claw, (and decouple from the fuel tank, so I'm only trying to move the structure beams with solar panels) but the problem is that once I do that, the movement logistics of the space mover change dramatically. (the CoM shifts outside of my ship) I tried grabbing the array in the middle, but it wasn't much better, I had a really hard time trying to make it to my orbiting base, let alone dock the thing.

I'm basically wondering what else can I do to build this base piece-by-piece in space?

Here are some screenshots of the array (connected to the fuel tank) and the space mover ship. 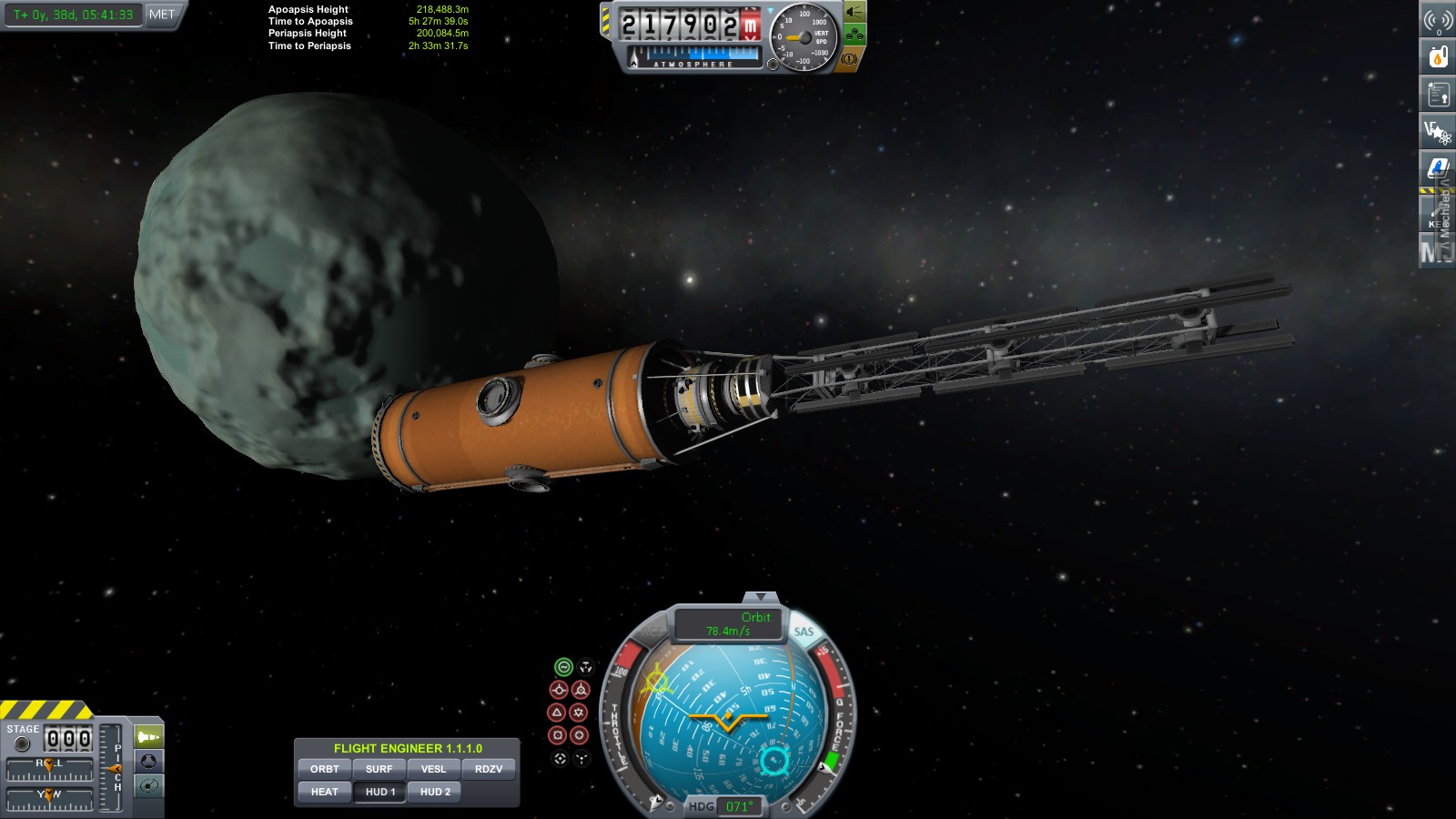 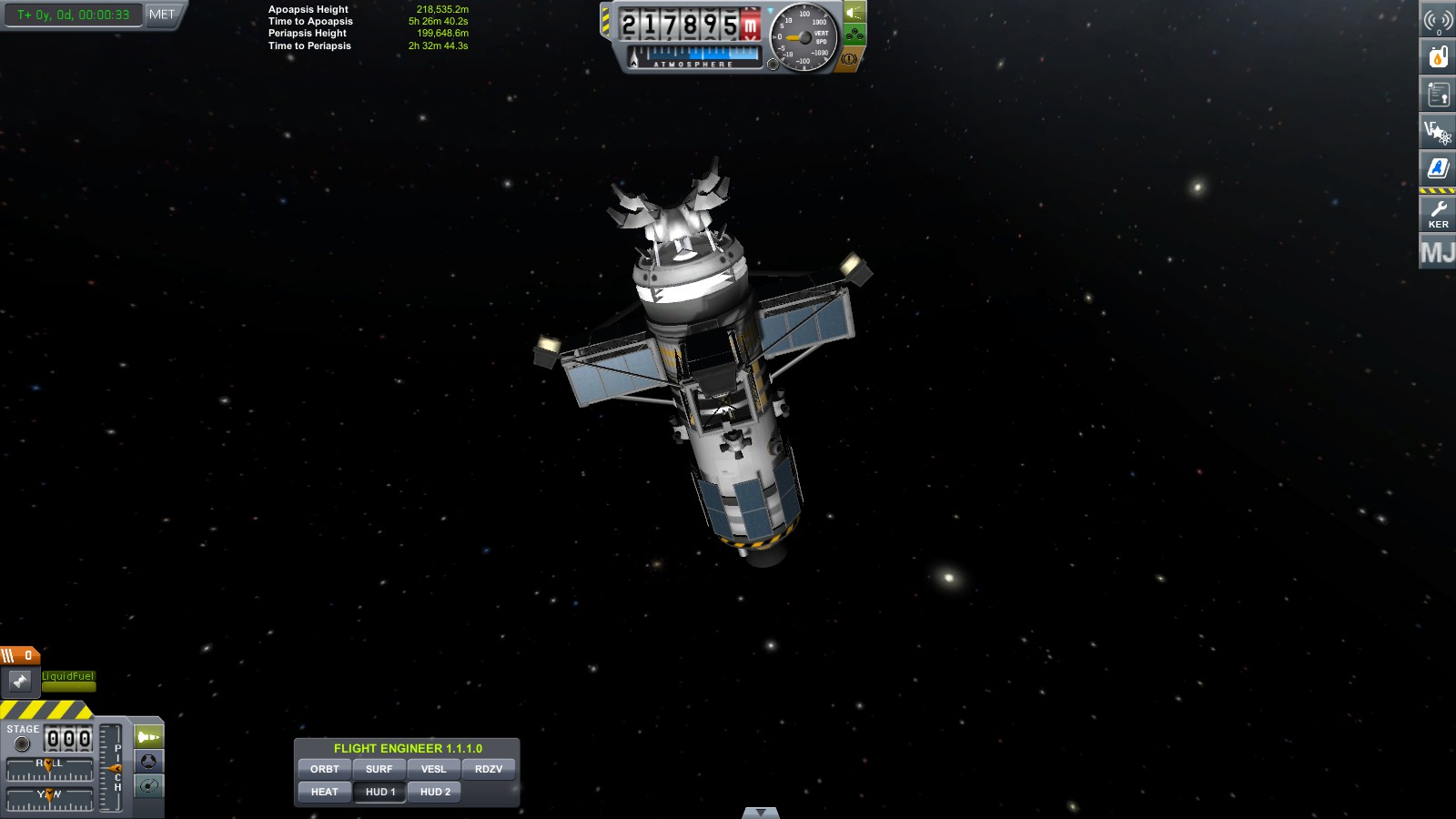 Here is the base I'm trying to connect to, the docking ports in the middle of the ship. I can't even manage to get close to the base with the solar array in the claw. 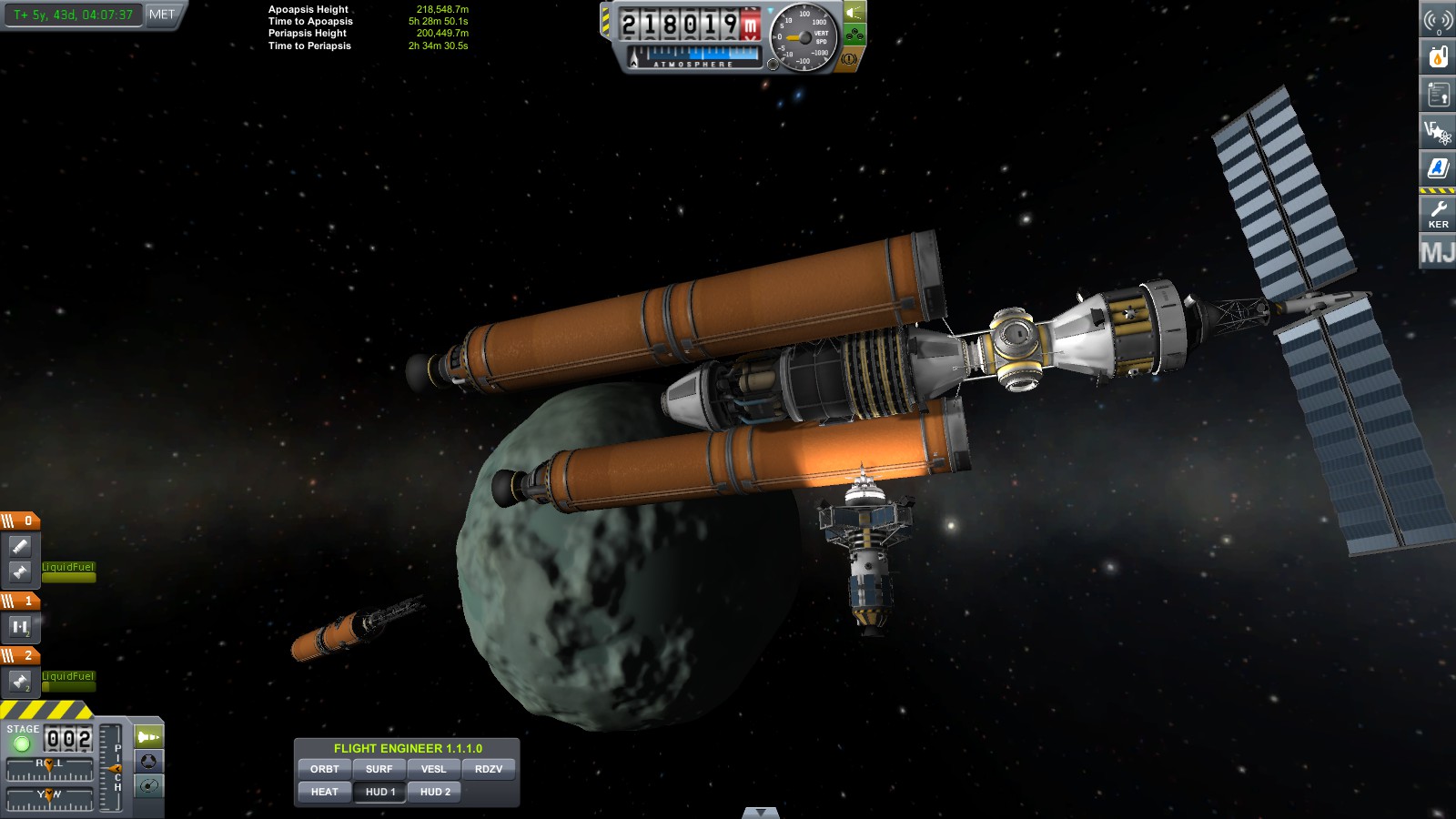 Update: I finally managed to get a connection on the end of the solar array with the claw, so my CoM would be inside the ship and easier to navigate. (Granted it seems to be on the end, but I don't think I can grab it in the exact center -- I had to grab one of the solar panels). While this was true for forward motion and turning, getting the thing aligned with RCS only at one end was also a challenge: 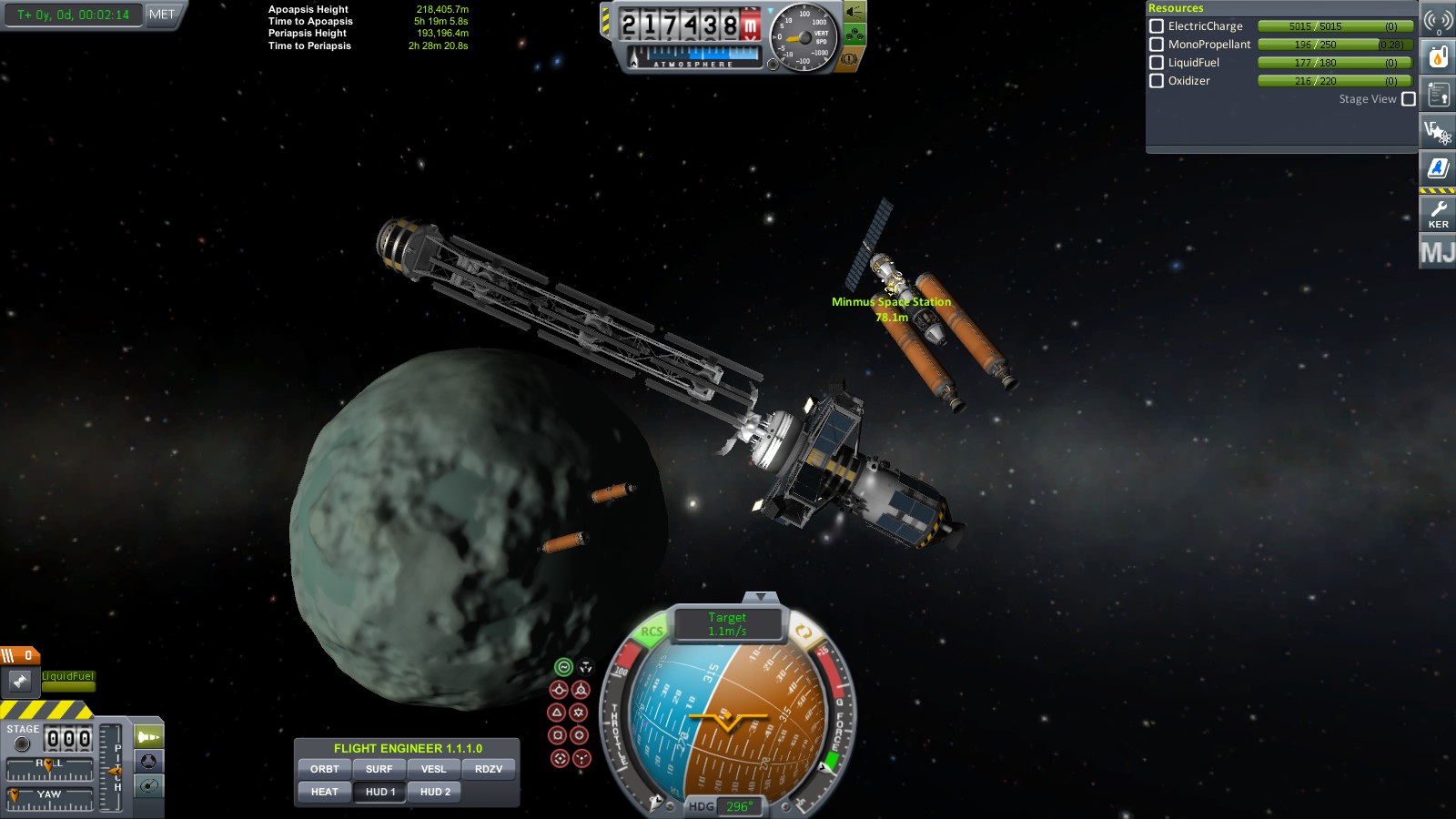 That basically gave me issues in moving the thing around. I positioned the base so that a port was in the correct position, and was able to get the mover ship there, but it quickly went bad when I can't easily translate (due to RCS being on one end of the CoM) and the angle just kept getting worse and worse. I would back off and try again, but after several tries, I'm not getting any closer.

Here's what the end result was: 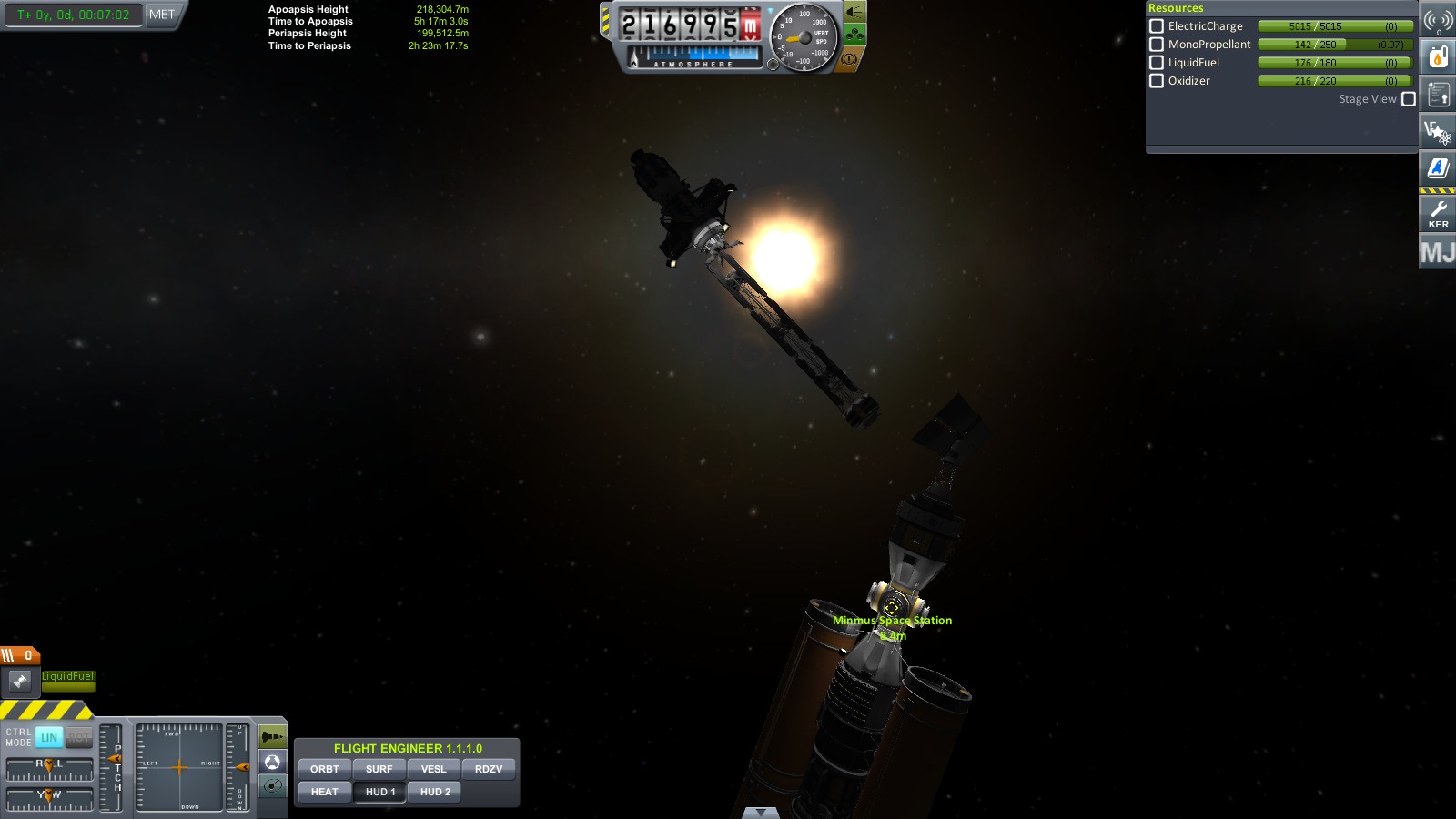 Update 2: So I had an idea for a more stable mover ship, although I'd have to potentially make different ones of various sizes, would this kind of design be more stable, with RCS on every corner? 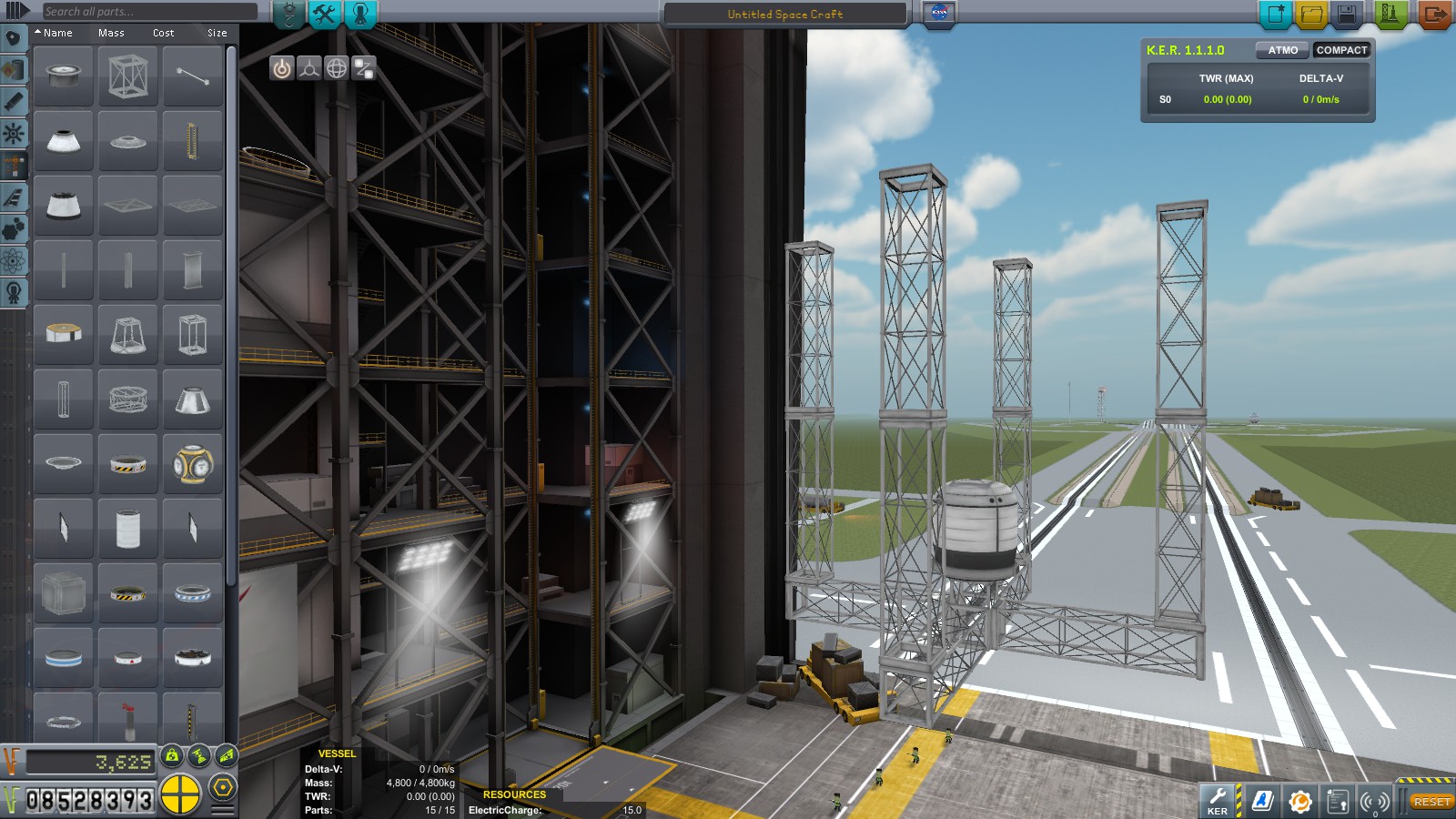 When connecting two any parts, you want the connection point to be between the two pieces' centers of mass, and them to be aligned in roughly the direction you'll be moving in, so the new center of mass should be in a good position relative to all your engines and RCS ports.

If I'm understanding this right, you're trying to move the solar array by grabbing it from the side, like this:

but then that would require you to translate your mover sideways, using only your puny RCS ports, which create a torque that is not balanced by anything on the other side, causing your ship to mostly rotate around its center of mass.

The main problem is that the solar array has no RCS ports to balance your mover, so if you try to rotate, you'll probably run into trouble. Ideally you want to have RCS ports on the array, but you can try something like this:

The idea would be to grab the array, decouple from the fuel tank, then move away only slightly, and instead of moving the array to your base, move your base in position behind the solar array, after which you can dock the parts together.

The best way to do this is to use self docking modules. Then you don't even need your docking tug.

But if it's impractical to use a self docking module, there's a few things you can do. The first is to not use the claw, but just a docking port instead. This allows you to properly align the center of mass of your tug with the module. If you still need to use a claw, make it detachable with a docking port, and just store it some place on your station.

The second thing you can do is add RCS thrusters to your modules. When docked, the RCS thrusters on the module will do a lot of the work for you.

Finally, if the above doesn't work for you, there are some other things you can do to improve your tug. Use two sets of 4 RCS blocks (i.e. 8 in total, or more), and fine thruster control, as well as SAS. To also help with keeping your tug pointed in the right direction, add some gyros as well.

Two things help: - an appropriate reaction wheel on your 'claw' (not too strong, not too weak; the small RW should be okay for the task at hand), and disabling RCS rotation controls (Actuation Toggles, disable 'Yaw, Pitch, Roll' on all RCS thrusters) - switching 'fine control' on - press capslock, the 'needles' on the controls turn from orange to cyan.

With fine control, RCS actuates not to 'full power' but enough to perform translation without rotation. It's also much more gentle - if weaker.

It's still a tricky work, but with these two helps possible.

You may also want to perform the assembly in a relatively high orbit, so that the motion of the craft relative to each other resulting from different orbits doesn't get into your way all the time.