Regarding those contracts about placing a satellite (or something else) around some planet or moon... May I dismiss them after the contract is fulfilled? Or there is some kind of penalty if I do that (like, the company not making new contracts with me again) ?

Once the contract is complete, that's it. You can safely remove your satellites from orbit.

Once a satellite completes its mission in can be removed from orbit. But this isn't recommended for the following reasons:

Example: I launched a satellite to Kerbin equatorial orbit which paid around K50,000. It has since been re-contracted to move to a new orbit twice paying an additional K45,000. I had left enough fuel to de-orbit but each of the contracts only burned 1 unit of fuel! 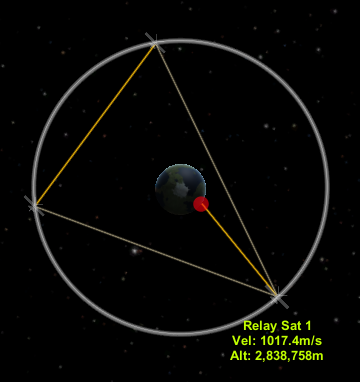 Yes, once you've completed the contract, you can do whatever you want with the satellite.

If you have multiple satellite launch contracts active at the same time, you can even complete two (or more!) of them with a single satellite, as long as it's got enough fuel to reach both orbits and the parts required by both contracts. Just get the satellite into one orbit, wait the required 10 seconds for the contract to complete, and then move it into the next orbit.

However, there are several reasons why you generally shouldn't just blow up or de-orbit a perfectly good satellite:

BTW, when "mothballing" a satellite, make sure that its solar panels are facing the sun so that it won't run out of power. Having some fuel left for future orbit changes is also a good idea; if your tanks are dry, and especially if you have other satellites nearby, you may want to consider terminating the satellite just so that you won't get any more contracts to move it later. Of course, you can also always just decline such contracts, or, if you prefer, launch a new mission carrying extra fuel and a klaw to grab your satellite and move it. ;)

1
Is there a contract multiplier
13
How can I satisfy a part testing contract?
13
How can I calculate the right number/types of parachutes for my craft?
7
Contract: recover lost kerbals from orbit
6
What causes Kerbals to become brain dead debris?
2
Long Ship Physics Problems
5
Criteria for completing the Orbit contract
5
New Surface Outpost Contract - add on to an existing base?
4
Change radial decoupler orientation or attachment part