I took my first mission and flew to the outpost. It had an external dock for me to land at. When I got positioned over the dock the vertical thrusters refused to work. When I was away from the station they seemed to. What's up?

Answering both your questions, and then some:

As shown by Sjoerd, the PC version has the ability to change its control mapping when landing gear is deployed. Look for "Flight Landing Overrides" in your controls menu.

Note: I haven't noticed this myself, as an Xbox player, so it may either not be there at all or it just defaults to normal controls and I haven't tweaked it. Or maybe it's coming to Xbox later. Xbox does have an "Alternate Flight Controls" option that can be manually activated though. (Default: R3)

If possible, I recommend binding vertical thrusters to an analog axis during landing. This gives you finer control over your landing speed, which helps avoid damage on touchdown. A post on the Frontier forums explains this well.

Your ship always has exactly two fuel tanks, for general fuel management purposes, regardless of how many individual fuel modules you have installed.

This is the tank you most often think of, and this is the one that your ship's computer was alerting on. You're very fortunate that you were already in the same system as a refueling station when you ran out.

Update: Okay, I don't know what the ship is talking about with "main fuel tank drained". I just got it for the first time myself, and I know I've drained my main tank worse than that before. (Though I was very low.) Interestingly enough, it did coincide with the draining (and refilling) of my reserve tank - something I've never had an alert about before either. More research is needed to find out exactly what that particular message is about.

The main tank's fuel is consumed in one of two ways (more on these later):

The reserve tank is a smaller (usually 1t or less) internal tank that all ships have, which is not displayed in Outfitting. This tank is what directly fuels all ship functions, except for FSD jumps.

Most critically, this tank supplies fuel for:

When the reserve tank is depleted, it is automatically refilled from the main tank.

If the main tank is empty, and the reserve tank also runs out, all ship functions will cease - including Life Support. In this case, unless you get help, you will die when your reserve oxygen supply is depleted (this will be a timer that shows in the upper-right - default color: blue - whenever Life Support is offline).

Your HUD has three indicators which are relevant to your fuel tanks and fuel consumption. These are all close to the word "FUEL" in the bottom-right of your forward HUD.

To the right of the word "FUEL" is a numerical indicator of your fuel consumption. This shows how fast your ship's fuel is being used at any given moment, in terms of how many tons are being drained from your reserve tank at an hourly rate.

So, when this meter reads "1.6/h", that means that 1.6t of fuel will be taken from the reserve (draining the main tank for refills as needed) over the next hour if your fuel consumption rate does not change during that time.

This number can be reduced by shutting off some non-essential modules. Anything that consumes power is also consuming fuel. If you shut off all modules, including Life Support, your fuel consumption rate should be reduced to zero. (Of course, this is not generally recommended.) With just Life Support on, the rate is still extremely low - my ship runs at around 0.05t/h when reduced to only Life Support.

Directly beneath the word "FUEL", and your fuel consumption meter, is a thin line that matches your main HUD color (default: orange). This shows you how much fuel is currently in your reserve tank.

Generally, the only time you need to worry about this is when your main tank is extremely low or completely depleted. Otherwise, since the reserve tank automatically fills itself from the main, it's not a major concern.

Beneath the reserve tank gauge is a thicker line, which may be solid or dashed. This shows the fuel currently in your main tank. Most of the time, this line will completely match your main HUD color. Sometimes, a piece of it will be a different color - this will be explained later.

Some ships will represent the main tank as a dashed line. In this case, each segment of the gauge represents an amount of fuel equal to that which is held in the reserve tank. This lets you know how many times your main tank can refill the reserve before the main runs empty.

When you have plotted an FSD jump, a portion of the main tank gauge will usually change color (default: cyan). This indicates how much fuel will be consumed by the FSD jump. If you have a jump plotted, and there does not appear to be a differently-colored segment on this gauge, then the fuel requirements for the jump are too small to be displayed. (Usually only applies to very short jumps, and/or very large tanks.)

How To Avoid Fuel Shortages

Running out of fuel is bad. Here's how to not do it:

A fuel scoop is highly recommended, especially if you plan on making long trips between stations or heading outside the bubble. This will take up an "Optional Internal Module" slot, and they come in all sizes.

Keep in mind that not all stars are scoopable. Some popular mnemonics:

Tip: You don't have to be moving fast to fuel scoop. Get to a point where your scoop's intake is maxed out, then set your throttle to zero. In supercruise, zero throttle is still moving you at 30km/s - this will fill your scoop just fine.

Regardless of whether or not you have a fuel scoop, paying attention to your route in the Galaxy Map is important. The line that shows your route can be solid or dashed.

Make sure there's a scoopable star, or a station with refueling services, somewhere near the end of the solid line. If there isn't, plan a detour accordingly.

Tip: Try to seek a fuel source whenever your main tank is about half-full. This way, in the worst case, you should always have enough fuel to return to the last place you filled up if necessary.

The Fuel Rats have a handy infographic on how to use the Galaxy Map to avoid fuel shortages.

What To Do When You're Out of Fuel

On PC, there is a separate set of key bindings active when your landing gear is down. Those are in the Options -> Controls menu. You might want to check those.

In my experience, it is very useful to have a special set for landing - it can make landing so much easier. I use the normal settings (pitch and roll) to hover horizontally near the landing pad. Then I lower the landing gear, activating a different set of key bindings with which I can land like a helicopter. Pitch and roll are not required during this phase, therefore I reused those keys. 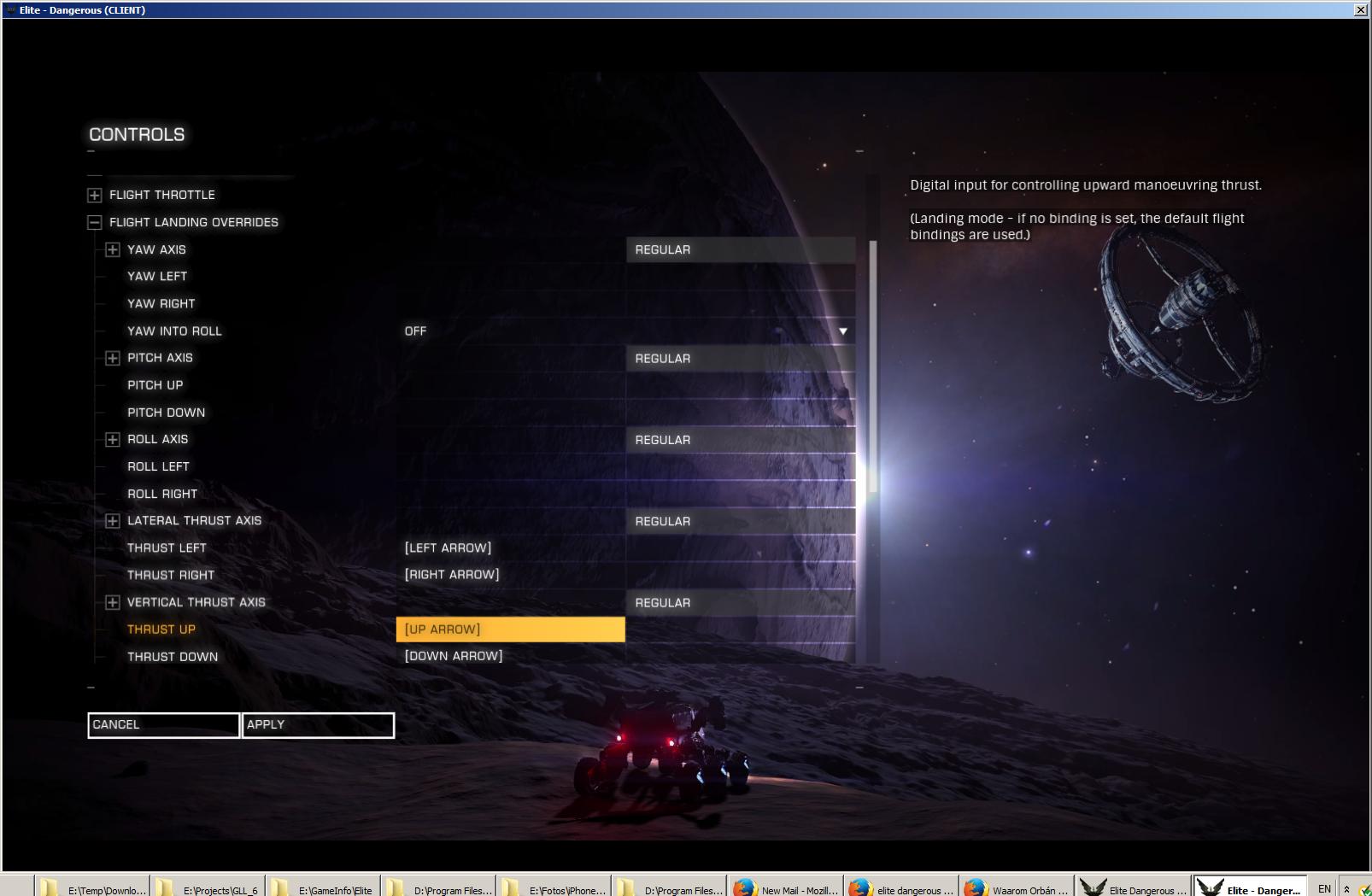 Not the answer you're looking for? Browse other questions tagged pc elite-dangerous or ask your own question.

3
How can I change the difficulty during the game in The Witcher?
2
Overlord II - rescuing green minion hive - main gate does not open
3
Low FPS and Performance Issues During Gameplay
4
No contacts available - no landing request possible
1
How to change font settings in steam for Main Category text?
1
Why does my copy of MGSV: TPP on PC crash during loading sequences?
6
Why (in-universe) can you only scoop from main-sequence stars?
5
What does maximum fuel per jump mean?