How to beat level 39 in Dice Heroes

In level 39 of Dice Heroes, there are too many enemy dice that can kill my dice turn one. There are two enemy warriors that start adjacent to the spawn location and will immediately use berserk on my dice. In addition, there are four other warriors that can move into attack position turn one. All of these dice act before my wizards (which would have area of effect attacks to counter this), and often act before my warriors can roll any shields, meaning that despite having the best equipment possible on my dice, I still lose enough of my dice in the opening that I am hopelessly outnumbered.

How do I beat level 39? How do I even survive the opening? 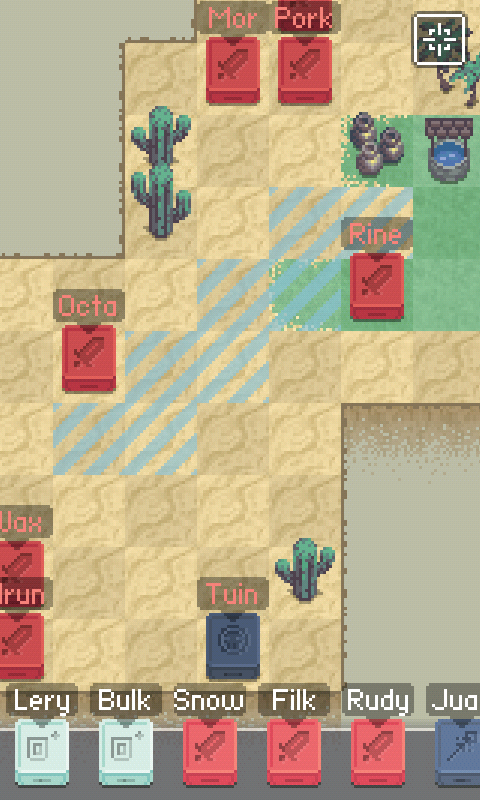 The three keys to this level are potions, clerics, and understanding how the turn order works.

To have a reasonable chance of beating this level, you need a minimum of two Potions of Fire. The three ingredients for this all come from different regions. Fire berries are cheap enough in gold that they are worth just buying outright. Rubies are most efficiently gotten from the 4th Dark Fortress level (once you have wizards with scrolls of fire tornado, this level can be beaten very quickly and sometimes gives rubies). Gold and Sulfur can be gotten most efficiently on level 9 (this map is small enough that it takes less than a minute to beat with properly equipped dice, and yields 10 gold as well as a chance at sulfur each time you beat it). Also, if you don't have all of the dice you want to bring at their experience cap with optimal equipment, play level 9 until you do. You need every advantage you can get on this level.

The two fire potions should be used on the enemies Octa and Rine, before they use berserk. This not only eliminates these enemies, it also leaves you with two more dice to use.

Having more than just these two potions can be helpful. Aside from the "Dice Ninja" achievement, this was the only part of the game where I actually needed potions, so use everything you've got.

Bring both your clerics! If you have not gotten the second cleric from the end of the Dark Fortress, go do that first. Clerics are key because they go before all other types of dice. This matters for two reasons. First, you need clerics to throw the potions of fire at the two warriors that start adjacent to your spawn location, since in order for this to work, you need to kill both of those before they act. Since each die can only use one potion a turn, you need two clerics to kill both of these warriors. Second, clerics can add shielding to your peripheral dice before they get a turn. This matters because the other nearby enemy warriors may be going before yours, and so you need your warriors to have shields activated before they are able to roll. The symbol of super protection is the best equipment for a cleric. Make sure to shield your dice closest to the other enemy warriors with this. Also, the resurrection ability of the clerics is really nice on round four or so, but it is far more important to use clerics for shields in the opening.

The thing that makes this difficult is that many of the enemy warriors do not have optimal equipment loadouts, in many cases having iron shields in the place of swords of resistance, meaning that they will not always roll damage, but they are earlier in turn order. This is particularly dangerous because they all are a high enough level to use berserk. Fortunately, fully equipped clerics will still go before any of their warriors, so the clerics using shields and fire potions are the key to you surviving the opening. Following that, you may want to take advantage of the fact that your warriors are later in turn order by using berserk on the warriors that have moved next to you.

You are at an extreme dice disadvantage here, so using abilities to correct this is always helpful. For example, bringing a shaman, hypnotizing one of their clerics, and then using that cleric to resurrect one of your dice can be a three-dice swing in the battle (you get a dead die back, they don't get a dead die back, and you can have their cleric do something suicidal before you lose control of it). Fortunately, neither of their shamans have hypnotize on this level.

Wizards are great, both for clearing swaths of enemies, and getting extra dice (via summoning) to draw berserks from their warriors or use berserk on a die with two armor. Make sure to hit their wizards as early as you can though (like with the first or second attack from your wizards), because the power of wizards works for both sides.

Beware of any of their warriors that end a turn next to one of your dice. Enemy warriors usually use berserk at the first relevant opportunity on this level.

Finally, once the opening scrum is over, try to move to one of the corners of the map. The top right is a little easier to move in to, and will give you a much more defensible position than the one you start in. This is also a good corner to focus early attacks on because it has the more dangerous of the enemy's two wizards.

Not the answer you're looking for? Browse other questions tagged android or ask your own question.

3
How do I get past level 35 of Mr/Mrs. Block Free?
0
How to get past level 30 on Teeter (Android)?
1
How to beat level 31?
0
How can I beat the Compulsive Gambler in Gem Minder 2?
1
Does anyone have the formula for the damage multipliers in Tiny Dice Dungeon?
2
What's the best way to level up a Brave Burst?
0
Majesty northern expansion on Android. How can I win that level?
3
Next level doesn't unlock even though I completed the preceding level
2
What happens when you beat Bugdroid in the Fruit Ninja tournament?