How are there Pokedex entries when I have not encountered the Pokemon?

When I updated Pokemon Go to the latest version, Version 0.41.2, I noticed my Pokedex contained additional entries that were not there before. Yesterday I had an 89/90 ratio, but this morning was displayed an 89/91 and Dragonite appeared grayed-out. I have never encountered a Dragonite in the wild, so there should not be an entry; even grayed-out.

Is this a bug or was there something else that I am missing? 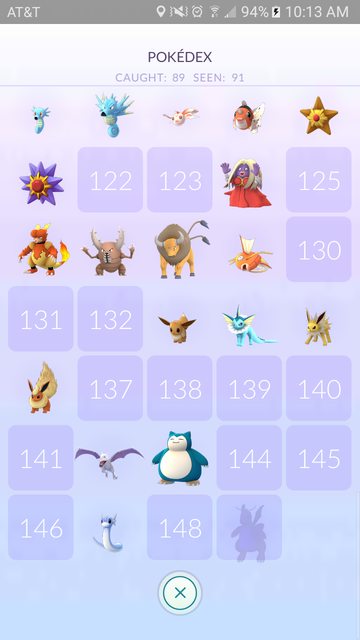 Although there was never an update to the app on the client side, it appears that there was a server side update that aded this feature. Seeing a Pokemon in a gym will mark it as seen in your Pokedex. See here. According to that post:

There has been a background push update that adds the silhouette to your Pokédex for Pokemon seen in Gyms going forward.

An edit to this post added the part that I think pertains to your situation:

You most likely drove or walked by a gym that had a Dragonite in it. Even though you never clicked on the gym and viewed the Dragonite yourself, it was added to your Pokedex and marked as Seen.

Also, it is important to note that this will only happen once:

it only contributes a phantom "Seen: 1" until the Pokemon is caught, and the number does not increase based on gym views

If there is one even within seeing distance but you are not in range, I believe that will cause it to be shown as, "encountered".

0
A Pokémon suddenly appeared in my Pokédex. Does that mean I'll see it soon?

20
How many unique Pokemon are there in Pokemon GO?
2
Why do Pokemon escape when I'm not moving?
0
Are there masterballs in Pokemon go yet?
3
Are small towns more likely to not have nearby pokemon at pokemon stops?
1
Account does not exist when logging into Pokemon Go
1
Are there Pokemon Centers in Pokemon Go?
2
My pokemon go eggs are not hatching