How can I make an extremely bright light?

I'm trying to make a beacon/lighthouse which is visible from a distance at night (on far render). What is the best light source which will provide the brightest light / most visible to the human eye when wandering back home at night?

Edit: Alternatively, are there any working mods/plugins that produce better lighting alternatives?

Lava, while potentially more dangerous, might be a better option as it more easily occupies a larger volume. It will be easier to see several bright blocks rather than just one or two.

You could build a glass box on top of a tower and fill it with lava. This should be visible from afar and relatively safe.

As of Minecraft 1.4.2, beacons were added, pillars of light that produce a buff when close to it. 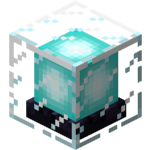 The beacon block itself is made of 5 glass, a Nether Star, and 3 obsidian.

The beam of light is visible from up to 256 blocks away, and is even visible in unloaded chunks. This provides a useful marker for short to mid-range gameplay.

Here is an image from Jeb:

Light in minecraft is pretty limited. In fact, a light source don't really produce light, it just brighten the cubes around it. So, a torch on top of a pillar, seen from far away, will just be a white pixel in the sky, not much different from a star.

The best way to see something from far, so, is not to make is bright, it is to make it large and recognizable, something that will not confound itself with the background. Making a huge ball of glass filled with lava, for example, is a good way to mark a place. But so is a sphere of red wool covered in torches and a large cube of glowstone. The difference is brightness from torches vs. lava is negligible for something like this. For afar, most details will not be visible, but it will still catch the eye as something very different and not natural.

So, in short, to mark a place, make something big and recognizable, not a small, bright light.

Lighting in Minecraft only goes up to 15, and those light-sources only light up to 15 away. If I wanted to make something very visible and cheap, I'd go with lava as you can get tons of lava blocks out of one bucketful if you let it run down aways, like this:

According to the wiki page your could put Jack O Lantern or Glowstone which are safest and the brightest.

For the other question that you added, no you can't change the lightning effect since the max value is 15 and the list in the wiki link above shows it. You could hack the minecraft.jar files for better lightning maybe, but only you will have the effect of that change.

Make a large flat face into a hill with stepped blocks all around. Make a hollow glass cross form and fill it with lava. Then remove your scaffolding. There will be no mistaking it for stars or landscape.

If you have high ceilings you can put them at the top of your room and it can light your entire room.

Ideally, you should use a beacon, but if you can't get one, make a netherack fire and suround it with glowstone. This is also a nice way to show how much you've been to the nether.

21
How can I provide natural light under a roof?
24
How can you hide light sources while they still give light?
6
Why is everything bright in my test world?
16
How many items can produce light?
9
Why does Minecraft grass have different colors, and how can I make it bright colored?
1
(Java Minecraft 1.14) How to make a non-block light source without mods?
2
How to make redstone lamps light up one by one?
4
How can I make a "cascading light" effect in Minecraft?
0
Projectiles extremely inaccurate on our server