In the mid-game of Civilization 6 you receive access to buildings like the factory or the zoo which have (in addition do some other bonuses) the attribute:

Bonus is extended to all cities within 6 tiles

*Related question: I'm assuming "Bonus is extended" refers the all bonuses of the district. (The district itself plus all buildings inside, like the workshop) Is this correct?

EDIT: As of the Winter 2016 update, it seems it no longer works the same way. From the patchnotes:

First off, you can actually directly see the various bonuses by hovering over your city's production. (same for food, faith, science, etc.)

I found out that

A) The bonus does stack, a factory gives +3 production, a city with a factory of its own within range of another factory has +6 instead of +3, thus receiving the bonus. 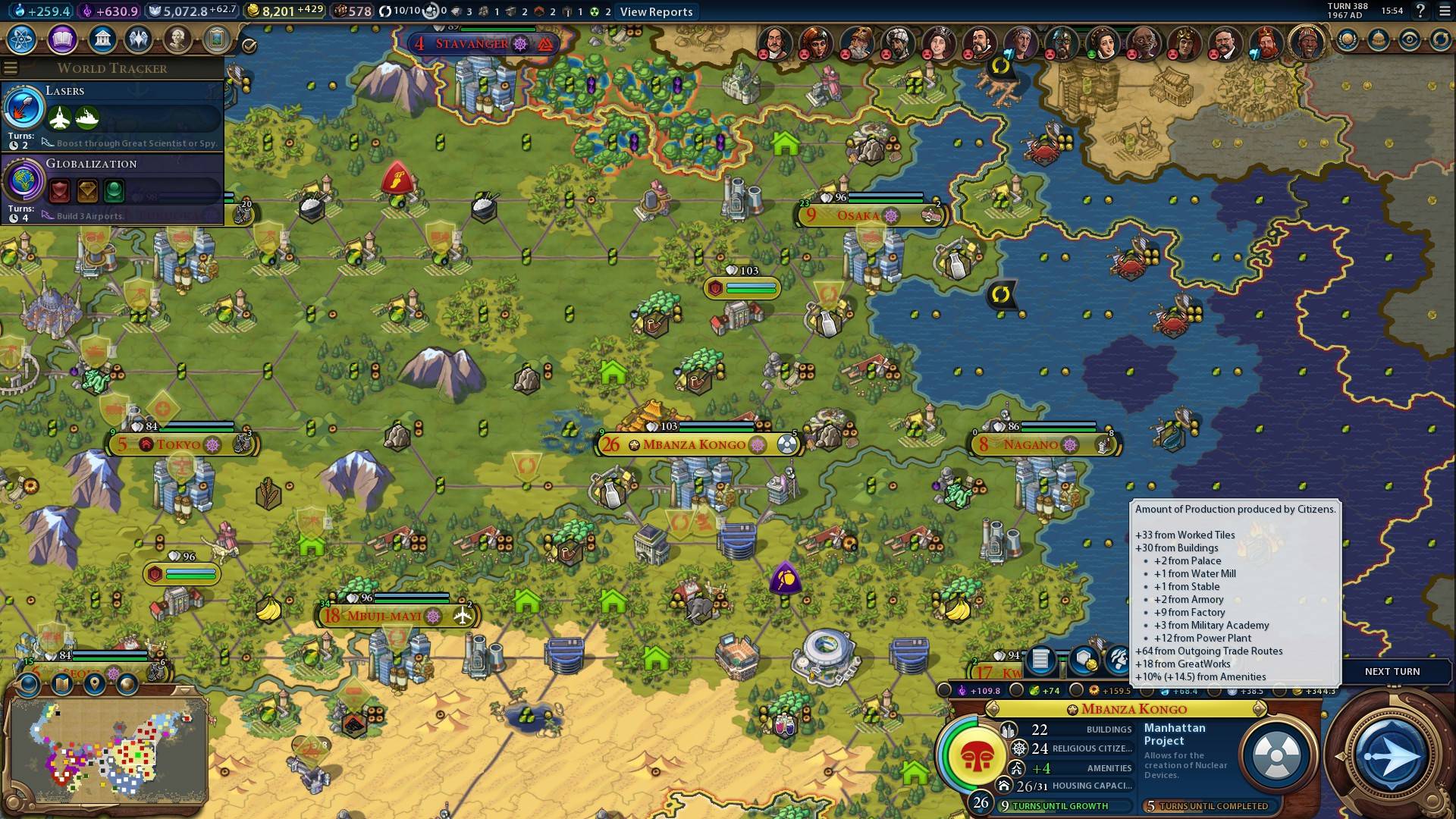 As you can see here, my Capital is within range of 3 different fully upgraded Industrial districts, so it receives +9 from factory (+3 from each) and +12 from power plants (+4 from each).

B) Only the factory bonus was added to cities within 6 tiles, NOT the whole zone bonus. So say a city with no industrial district is in range of an industrial zone with a factory and a workshop, the other city will only receive the +3 bonus from the factory. Again, as you can see in the screenshot, my capital does not have an industrial district of its own, so it only receives bonuses from Factories and Power plants, not from the workshops.

This makes sense as the entertainment complex, for example, has multiple buildings that extend their bonuses. So each building is worth building, as each will only give off its own bonus.

So far what i've experienced, is that the different bonuses stack, but im not sure whether its the building with the tooltip that is extended to 6 tiles or if its the whole district.

PS: around mid game i tend to build industrial districts in all cities, and entertainment districts here and there when needed, to get that late game amenity boost.

13
Do the ranged effects of districts or the Colosseum depend on the actual district location or on the city center?
4
Which districts can be shared between multiple cities?

13
Do the ranged effects of districts or the Colosseum depend on the actual district location or on the city center?
4
In Civ6, can a Trader pass between land/sea using foreign cities?
4
How is the yield of a district calculated?
4
Clear forest / improvement before building?
4
District building limitations in Civ 6
2
What building boosts Saka Horse Archers?
21
Does building farms destroy strategic resources?
5
City State Bonuses - where can I see if they are applied?
2
Do tiles have to be worked in order to get the yields?
1
Building Acropolis (District)