Why can't I discuss “Don't convert my cities”?

Teddy from USA is trying to convert my cities. He has used missionaries to spread religion.

Why can't I see the Discuss option to ask him to stop? 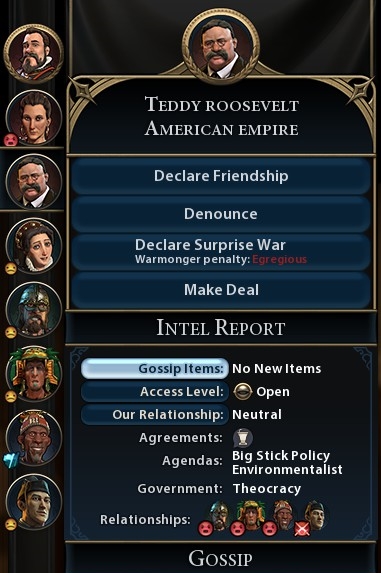 I haven't confirmed this, but I believe that you can only bring up this topic of discussion after one of your cities has been converted.

Note that using a missionary does not mean your city is converted. Conversion happens when the majority of citizens follow a religion. If a single missionary was used it may be that only some citizens became swayed, but not the majority.

I have found that the AI never brings this up with me until I fully convert at least 1 city.

25
Can I restore my wiped out Religion in Civ 6?
2
Cannot transfer a great admiral to another city
5
Your promise to the French empire to stop converting cities has been broken
1
Some cities producing 2 for 1 units
11
How should one interpret the religion lens?
0
Why can't I upgrade my Saka Horse Archers & Horsemen?
8
Best use of Missionaries
2
Founding a Religion in a city that already has one
6
Will converted civilizations actively spread your religion in Civ 6?