What is this old arcade third-person shooter similar to Contra?

Back in 91/92, there was an arcade only game that was out. You could buy items/weapons/ammo at checkpoints, I can't remember if it was at the end of a level, or if it was in a shop.

2 players could play simultaneous split screen-split vertically, so you would have left/right sides. The view during the game itself was over the shoulder 3rd person-almost identical to Contra (level 2). You had a map as well, and could strafe in addition to moving to new areas. No screen was "locked in", so running off screen immediately showed the new area. It was a shooter of some type, and either the joystick or fire button had a special control type, like a gear you'd turn instead of a button to press.

I've looked everywhere, and have found a screenshot to use. This is a long shot, but I'd really like to know. Mazzio's pizza actually had the cabinet in their pizza place. This is all that I have on the game, as I'm 35 now and that was about 25 years ago 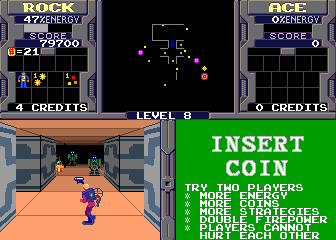 It looks like Xybots based on a google image search. 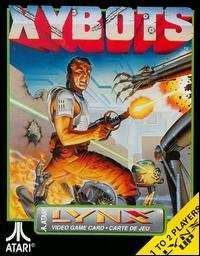 10
To which first-person game does this screenshot of a mountain lift belong?
10
What is the name of this old Arcade game?
16
What game is this screenshot of a warzone from?
13
What is the name of this old GBA game?
9
What is this 3rd person game with medieval-style battles?
22
What game is being played on this old TV?
26
Sidescrolling shooter where you rescue Vietnam POWs
3
What is the twin-stick shooter being played in the beginning of this video?
6
What is this PC game in this youtube video?
16
What shooter is Miles playing in the beginning of Guns Akimbo movie?