This was an issue for me with the original Skyrim, but I was hoping maybe it would be fixed in the Special Edition. However, that doesn't seem to be the case.

With Windows' volume settings at 100% (both for the System and the game itself), it's far too quiet. Even with all in-game audio settings at max, I have to crank up my speaker volume by quite a bit to hear the game at an acceptable level. This can't be right, since I don't notice this with other new games. On top of that, sometimes I forget to turn the speakers down again, resulting in a butt-clenching scare when I play some music or a video after exiting the game.

I've already tried to look into it myself, but all I seem to find is a lot of Steam community discussions of "yeah me too, screw you Bethesda you garbage developer", hence my question here.

So, how can I increase the volume of Skyrim so that I don't need to change the level of my speakers?

In the Control Panel > Hardware and Sound > Sound Menu select your speakers (Realtek high-definition audio for me) then > Properties > then go to Enhancements tab > and check the Loudness Equalization, then re-launch Skyrim, and check for differences on audio, this helped me

Then, I went to the SRS tab on the sound menu checked to enable SRS technology (this is from Realtek HD audio controller) and selected the game option.

Then the game really sounded really good and noticed I can hear everything just fine and not with max volume.

(I fixed formatting and grammar in the quote)

Note that these are solutions to regular Skyrim that may or may not work the same on the Special Edition. They're just things I came across with Google searches.

The most specific solutions to low sound volume seem to be related to RealTek HD audio devices when set to stereo sound. Lots of people are reporting that 5.1 is a lot louder.

The idea here is that you always leave your physical volume high enough to hear Skyrim when all the software settings (system and Skyrim in the volume mixer, in-game sound levels) are maxed out. Then you lower everything else to a reasonable volume with the software volume mixer. As long as you have a sound manager with persistent profiles, you shouldn't get deafened by other applications since you don't need to remember to turn anything down.

Windows 7 should do this by default. Check out this answer for a solution if your Windows 7 has stopped doing this.

It seems the Windows 8 and 10 volume mixers don't let you retain your settings from session to session. So an aftermarket application, such as Ear Trumpet as mentioned in Jeremy Hajek's answer, may be required for this kind of solution on these operating systems. I don't know anything about that specific app, except that it's W10 exclusive and seems to be BSoDing a lot of people computers. Nor do I know of any other apps off-hand.

You may also want to look at Rafael Rivera's Ear Trumpet program. It is a Windows Store APP (also a win32 version) that gives fine grained control over volume per application and sits in your application tray. Ear Trumpet Windows 10 Store link. 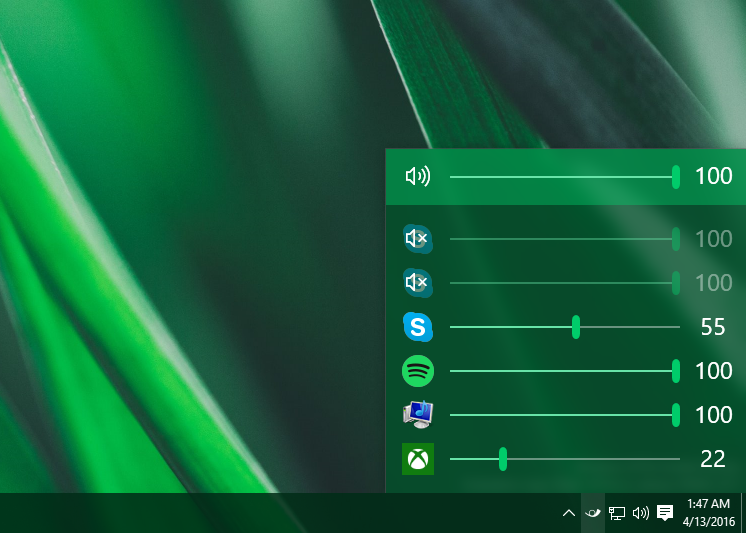 A patch is coming later on to adjust the audio issues in the SE. This is a known problem and is caused by Bethesda not using uncompressed WAV format for their sound but rather a compressed XWM format. Although I'm not a 100% sure, this might be your problem.

Documentation of the issue can be found here

Whilst this question has long been answered, most answers are some variation of "enable some "enhancement" in your audio-driver, which will compress the dynamic range, so everything is loud.", which doesn't really satisfy me.

I realised that the problem was similar to listening to a film with 5.1 audio, on a stereo system, without proper downmixing. Most things are too quiet. And that indeed was the problem for me, Skyrim wasn't downmixing its 5.1 audio to stereo properly, the centre channel in particular was dreadfully quiet.

Thankfully, with some free (for personal-use, and not open-source) software, this is relatively easy.

I installed VoiceMeeter Banana. And configured it as follows:

In Windows' Playback Devices Settings, I performed the following for the VB-Audio VoiceMeeter VAIO device:

I then opened the VoiceMeeter Banana program, and set the A1 output device, to my physical, stereo audio device. I used the WDM driver, as it has a low latency, and low CPU-usage.

Then, in the Master Section, I ensured that the mixing-mode for output device A1 was set to downmix to stereo. This can be done by setting it to "Mix Down A", or "Mix Down B", the difference between the two is detailed in VoiceMeeter's manual (as is the process I described in this answer).

Use a virtual audio cable to route audio to a VST plugin host with a compressor in order to level out the volume, tutorial here: https://www.nexusmod...tion/mods/37418

Not the answer you're looking for? Browse other questions tagged the-elder-scrolls-v-skyrim pc .

3
How to fix (sporadically) jerky animation for loading books or using enchanting/alchemy/smithing instruments in Skyrim?
6
Skyrim, Fallout 3 and New Vegas: major mouse issues
1
Limiting the number of auto-saves in SkyrimSE