Was it possible to rename characters in the original NES Final Fantasy?

I was reading through an article about bugs in Final Fantasy and it brought back memories of playing the NES game. In the manual, it recommended that players just looking to jump in to mash the A button repeatedly to accept the default party, a Fighter, a Black Belt, a Thief, and a Red Mage, with names of AAAA, and that the names could be changed later. Except, well, there was no ability to rename the characters that I knew of. 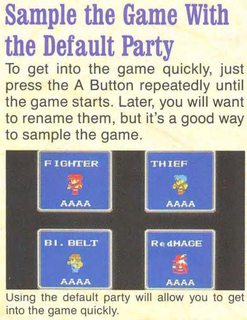 Did this capability exist either in the core game or via some way of tweaking the game into accessing a disabled menu such as a Game Genie? My assumption at the time was that the people who wrote the manual were just confused, or that it had never been implemented, like the ExciteBike Load/Save course functionality (which I'm given to understand was possible on the Famicon through disks or cassettes). I suppose the third possibility was that they assumed people would just use this tactic to try out the game initially and come back and name the characters for their actual playthrough.

The text in your screenshot is misleading. What it should say is "in later runs, you should rename them". Once the names had been given, they could not be changed. The AAAA names for all is just default value if no proper names are given. Only thing that giving the AAAA name for the characters does is to allow you to get into the game faster.

In none of the Final Fantasy games can you rename your characters. The name given at the first time is the name you are stuck with.

My game warned me that the names could not be changed later. I am borrowing the original to play for the first time.

Not the answer you're looking for? Browse other questions tagged final-fantasy or ask your own question.