Could the new Nearby feature actually hide rarer Pokémon from Sightings?

Niantic is rolling out the Nearby feature in some more cities besides San Francisco, so instead of seeing up to 9 Pokémon, you see some selected Pokémon near the Pokéstops nearby, but only 3 Pokémon in the Sightings tab. 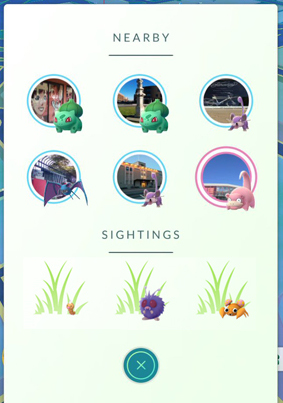 In some cases, in the top 6 slots, I have seen multiple Tentacools (three of them) at somewhat far away Pokéstops (in some cases, up to 2km away), even though Tentacool is a Pokémon I may not even catch if it were to pop up on my screen.

In fact, it might even be worse if I am hunting for a Snorlax I see in one of those three spots, but then a Paras (or something) comes into range of me and replaces Snorlax in my Sightings, making the Snorlax disappear from screen as if I'd walked further away from it, even though I did not.

Also, if this new feature really can prevent a Snorlax or Lapras (or Dratini) from being found, is there a way at all to disable this new "Nearby" feature? I might have to travel to a different city to play, which would make it more troublesome to play than it used to be.

P.S. some update on a real situation: I clicked on the Pokemon Go Plus device, and then saw on the phone that it was a Porygon, and too late... I already clicked and the Porygon wasn't caught and ran away. So my friend opened up his phone, entered the app, but cannot see any Porygon in the "Nearby" or "Sightings" because we already moved some 50 feet or so. The Porygon in fact was just 50 feet away and we could not see it. Instead, we saw only Pidgey, Rattata, and some other common Pokemons in the "Nearby" and "Sightings". So we walked 50 feet back, and the Porygon popped up for him to catch, and he caught it.

Theoretically, yes, you are right that this new implementation could hinder your ability to catch rarer Pokemon.

However, this is a beta feature and Niantic is specifically looking for feedback like what you have posted above. While there is not a way to disable this new Nearby implementation currently, you should definitely submit this feedback to Niantic so they can take it into account before they introduce this feature universally.

Here is the link for submitting a bug report.

22
Are there Pokémon that can only be hatched from eggs?
6
How does the nearby tab work in Pokemon Go (after 2nd update)?
3
Are small towns more likely to not have nearby pokemon at pokemon stops?
1
How to compare different Pokémon with the same CP?
4
What determines what is Sighted versus Nearby?
6
No coins or notification: Do I need to do something to get earned coins?
18
Why would a Pokémon's silhouette appear on the nearby list, despite already owning it?