How do you enchant items with Lapis Lazuli?

First, do make sure you have plenty of bookshelves with one air block between them and the enchantment table. A common arrangement is a wall 2 high with 3 sides: 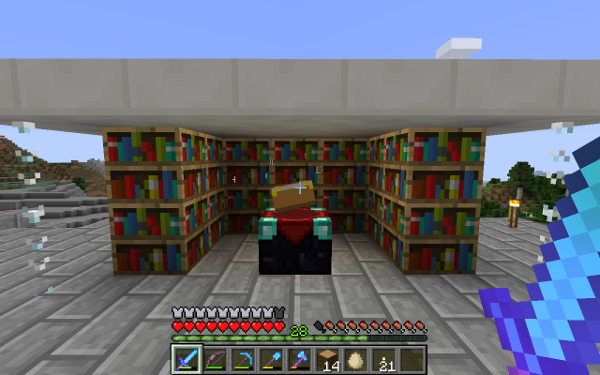 You can use the "torch trick" to re-generate enchantment lists if they are not appealing.

If there is not an air space between a bookshelf and the table, then that bookshelf does not count. So you can do the following:

It used to be possible to keep adding and removing torches to re-generate the enchantment lists. When I tried it just now in 1.11_prerelease, this was not happening.

Also, do note for high level enchantments on diamond or gold gear, there is a good chance you will get a secondary effect (not shown at time of selection) or even two. Sometimes by chance this secondary effect is really worth having, although you cannot control or predict it, don't let the "boring" factor of seeing Efficiency IV or Unbreakable III put you off just giving it a try. I ended up with a favourite diamond pickaxe, Efficiency III, Unbreakable II, Fortune II by just taking a chance on this.

You'll need to enchant something to get the offered enchantments to change. Have a selection of items ready to enchant and see what most appeals, or just choose to cheapest so that you can get a new selection to pick from.

I suggest that you enchant a book with a table surrounded by bookshelves (level 30) with 3 lapis, and then use an anvil to apply the best books to the armor. Note that the enchants will get more expensive as you add more enchantments to the equipment.

When you enchant an item, a new list of possible enchantments is generated for each item type (every tool/weapon/armor with every material), the list stays until you enchant something else

174
How can I keep monsters out of my nether regions?
3
How can I change the durability of items using commands?
2
How can I enchant a bow with Infinity 1?
5
How does enchantment combining with an anvil work?
0
How to get infinite diamond armour/tools without crafting/infinetly?
9
What is the correct name to use with /give for Lapis Lazuli?
1
What's the command to have two or more enchantments on the same item
0
testfor lapis lazuli anywhere in inventory
1
Explain the best Y level (height) for mining in Minecraft