In Operations, what does the Attack/Defense rating actually do?

After successfully attacking or defending in Operations mode, the score screen displays an attack/defense rating.

Usually, this comes in the form of XX/XX, where the X represents a number of varying amounts. For example, my team just failed on attack, and the screen said "Attack Rating: -148/33." I've seen a defense rating of 745/38 as well, but I have absolutely no idea what any of this information means.

What is the point of this seemingly pointless rating?

A user at Battlefields Forums says that:

You said that your team failed at attacking thus matches the description above where the number on the lest is really low. You might have done really well at defense on the other hand thus the high defense score. Of course, sometimes it's not that accurate according to a Reddit post (the comments may provide useful): 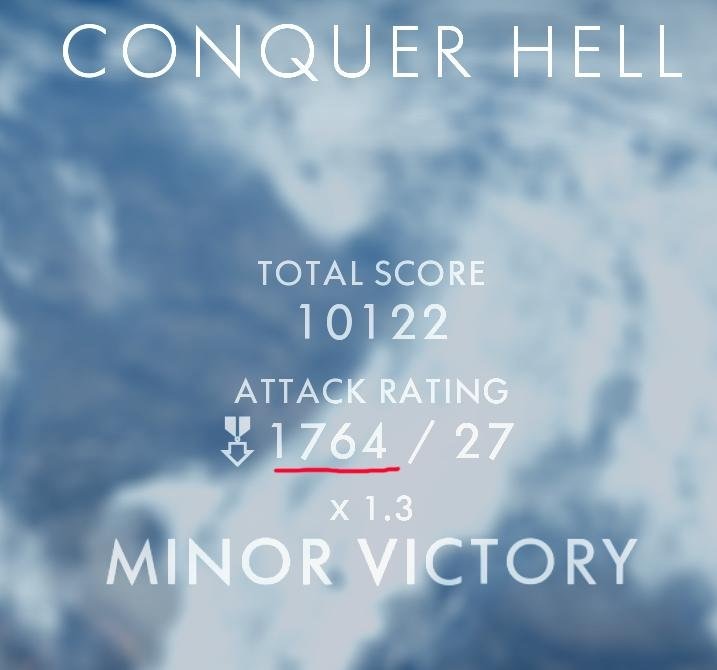 Last time this was asked I said it's probably a way to determine if your team did well compared to a "standard", in this case "27". God knows why, everyone knows 42 is the answer to everything but there you have it.

If your team's K/D, time needed to capture points on attack, time needed to kill off all attackers as defenders, etc.. is better than an average set by the devs, you get a better score multiplier after the round.

You can still lose and get a positive multiplier because of this.

The negative score you sometimes get is probably due to the fact that it's calculated against the defence standard when you are on the attacking force. I'm no programmer though so don't hold it against me if I'm wrong.

As far as I can tell, you're not meant to outright win some maps. Instead you're given a score depending on how strong your attack was:

This is not 100% confirmed but just my observations.

This was completely broken in the beta. As of final version of the game it seems to be working correctly.

The final result seems to be the total of each sectors' attack/defense rating from both maps.

For example Conquer Hell is two maps, Ballroom Blitz with 4 sectors, and Argonne Forest with 5. That's 9 total, maximum rating is 3 therefore your best operation rating is 27/27.

Not the answer you're looking for? Browse other questions tagged battlefield-1 or ask your own question.

3
What triggers the Behemoth train on Sinai Desert?
11
How does the ticket system in Operations work?
4
How does the radar work?
0
Does the Battlefield 1 campaign have extra/hidden content if I collect all the medals/codexes?
4
Does the singleplayer campaign unlock anything for multiplayer?