How do I beat Endurance levels?

I have a lot of trouble with endurance. I usually go down around wave 50 on the early levels. How can I improve my strategy to reach the higher waves?

I keep upgrading my towers and the monsters die with ease, but it seems like all of a sudden the waves are really hard and my towers can't put a dent in their HP.

The fact of the matter is that actually beating endurance is practically an impossibility. There are, I believe, 512 waves total, and the HP increases exponentially at a rate that is quicker than your damage will increase. And on top of that, the lag will be so awful with all of those monsters with a such a high hp and dozens of gems firing off hundreds of times a second you can literally count the frames.

But there are certainly a few strategies you can employ to get pretty far(though, being a mid-game player you're somewhat limited by your skills). Many of them can be found in this forum, written by people with more experience than me. I'll go ahead and answer your specific questions, though.

Are prismatic gems worth it compared to bi-colored gems around wave 50ish?

Perhaps. It depends on the level and your mana farms. Keep in mind that prismatics aren't really worth it below grade 11 and as a midgame player your skills probably aren't leveled enough to make them very effective.

Can you give any tips on when/how often to manna pool, for example "x1 time per wave" ?

A few high level gems is better than a lot of low level gems at that stage of the game.

Are level 7 and above grade gems worth it, damage and price wise?

From what I've read, grade 11 is when it stops being worth it to combine gems of the same grade. Though with prismatics I believe it's around grade 13.

I notice that when I replay an endurance level, my exp doesn't go up?

You need to beat your previous endurance score for that level.

Any other tips you can give for mid(?)-game endurance levels?

There are plenty of great video tutorials, this one by ulegh is particularly good (and long!). In the end he gets to this kind of situation: 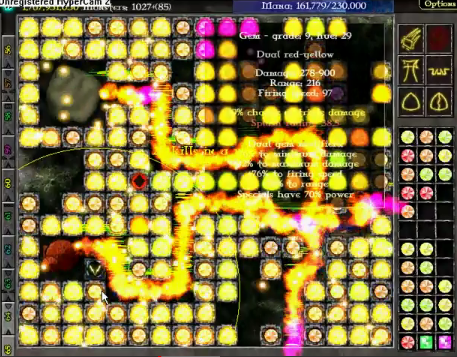 Not the answer you're looking for? Browse other questions tagged gemcraft-0 .